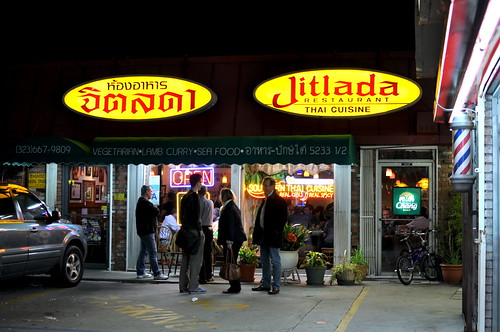 My first dinner at Jitlada was a bit of a blur. Our party was thirty something large, and each of the fifteen dishes that we ate were chosen beforehand by the host. All I remember from that evening was socializing with a lot of interesting people and being treated to an avalanche of bold, sweat-inducing flavors. I’m quite certain that Jitlada’s jungle curry forever changed the landscape of my taste buds that night. 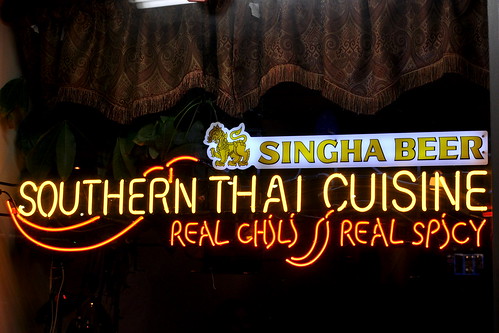 I returned to the temple of Southern Thai cuisine last week with a smaller but equally interesting group of eaters. Joining The Astronomer and me were Danny of Kung Food Panda, Mike of Pepsi Monster, Hong of Ravenous Couple, and Bill of Street Gourmet LA. This time around, we ordered our personal favorites and made room for the headliners making waves in numerous magazines, newspapers, and television programs. Tall cups of Thai iced tea and super-sized bottles of Singha were in order to quell the inevitable burning.

Jazz Singsanong, the restaurant’s infectiously hospitable owner, was on hand to help us navigate the daunting menu. The warmth that she exudes is as much a part of the Jitlada dining experience as the food that comes out of the kitchen. Ms. Singsanong is the heart of the restaurant, while her brother Tui’s cooking is the soul. 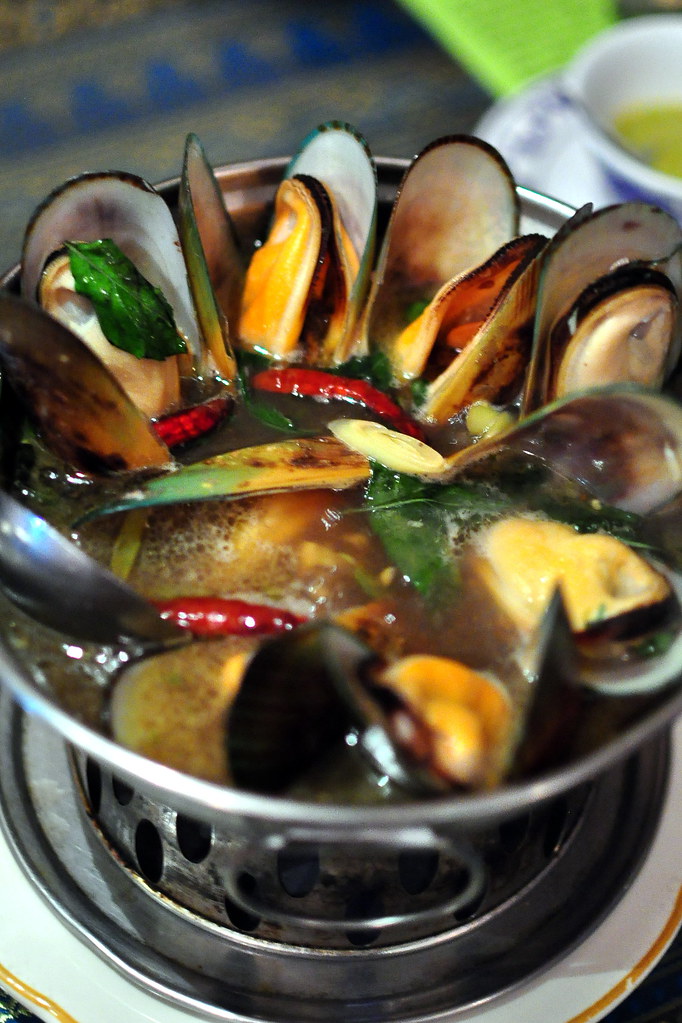 The first dish to arrive was the New Zealand green mussels. The meaty little devils were bathed in a boiling broth of aromatics including Thai basil, lemongrass, garlic, and dried red chilies. After we polished off the mussels, the broth was ladled into bowls and slurped heartily. 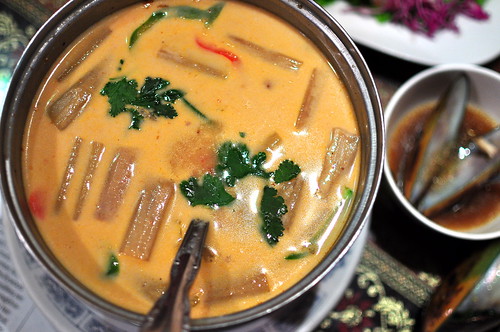 Based on Jo of My Last Bite’s recommendation, we ordered the coconut, lotus, and red snapper soup. The broth was fragrant, rich, and mildly spicy due to an abundance of coconut milk and a dabble of warm chilies. The hunks of snapper were tender and just cooked through. 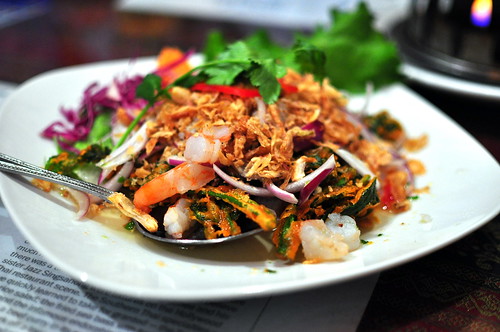 The crispy morning glory salad was as satisfying as I remembered. Morning glory is a staple in the Vietnamese kitchen as well; however, my people never thought to deep fry the stalky greens! The dressing was reminiscent of another Vietnamese staple—nuoc cham. I love it when neighboring countries influence each other’s cuisine. 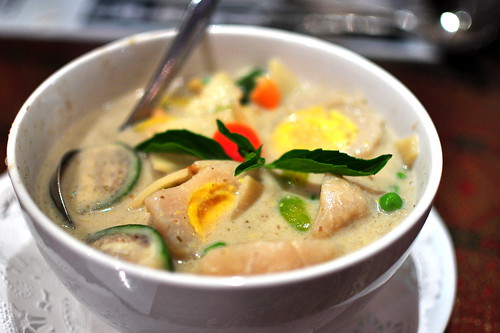 There’s something about Jitlada’s fish balls stuffed with salted duck eggs that I can’t get enough of. Maybe it’s the appealingly chewy texture of the fish ball? Or the perfectly spiced green curry that it’s swimming in? Anyway, eating a fish-cake-encased yolk is really quite dreamy. 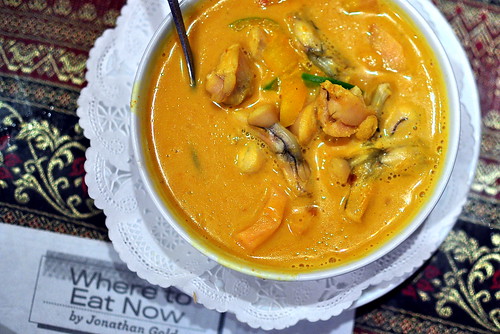 The frog curry that Bill suggested was challengingly spicy but not overly so. Frog isn’t the most satisfying protein due to its bony structure and lack of meat, but the curry was so lovely and creamy that I didn’t even care. 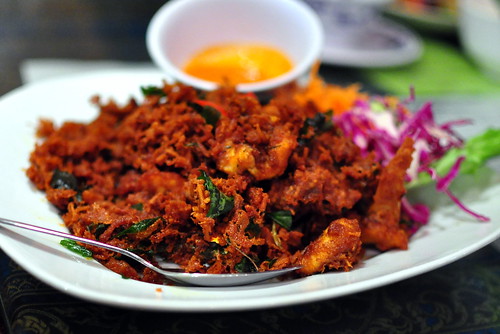 The crispy fried fish were accompanied by shards of equally crunchy basil. While this dish was texturally interesting, it didn’t have as much depth of flavor as the rest of our spread. 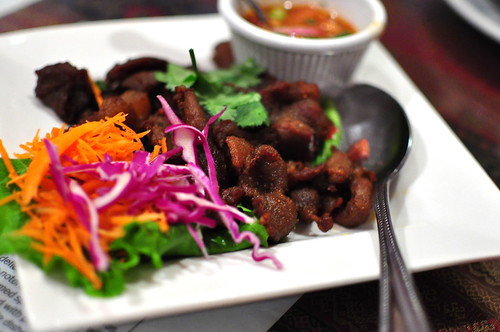 At the recommendation of Jazz, we ordered a plate of “crying tiger.” The pieces of pork were aggressively seasoned and had a dry, jerky-like quality to them. The spicy sauce served on the side livened up everything it was drizzled on. By the way, Chef Curtis Stone will be waxing poetic about this dish on the Food Network’s “The Best Thing I Ever Ate” later this month. 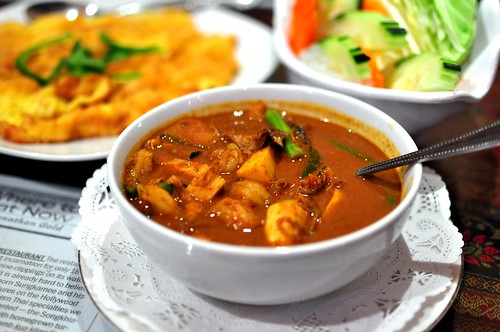 The final savory course of the night was the fish kidney curry, one of Jonathan Gold’s 99 Things to Eat in L.A. Before You Die. While most Thai curries are consumed with rice, this one was served with a fluffy omelet. A bowl of crisp vegetables dunked in shaved ice was also on hand to balance out the curry’s spiciness.

The pool of funk contained minced shrimp, chunks of pumpkin, and grilled sardines, but not a single trace of kidneys. According to Jazz, Eric M., the man who translated Jitlada’s menu years ago, misinterpreted the Thai words for “kidney fish” as “fish kidneys.” Hence, there were no actual kidneys floating about. Darn! The kidney fish curry was so spicy that I teared up some. 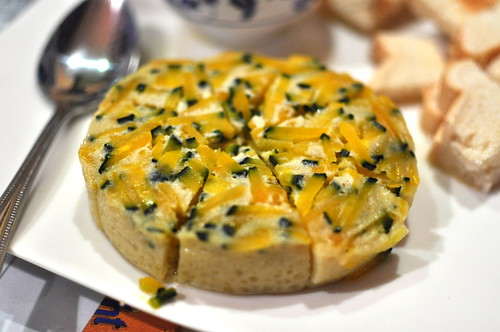 For dessert, Jazz treated our group to two special sweets. The first was a delicate pumpkin custard that reminded me of flan. 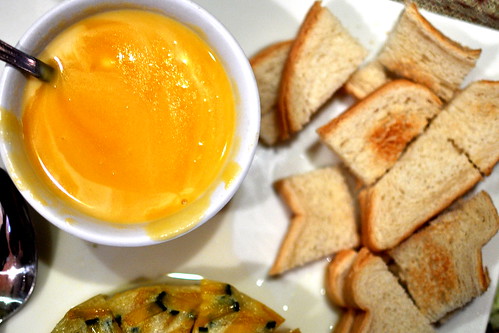 And second, her rendition of Singaporean kaya toast. The coconut jam was made fresh, served warm, and superbly sweet. She encouraged us to smother our little squares of white bread with more than a reasonable amount of jam. I love that woman.