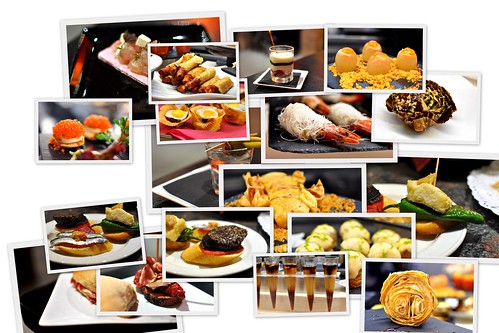 In Basque Country, tapas are referred to as pintxos, and the hours between lunch and dinner are dedicated to the sport. It’s customary to order a small bite and drink at each bar, consume them jollily on the premise, and then move on to the next joint. Grazing is the name of the game, and one should feel properly full and slightly tipsy by the end of the night.

Whereas the bars in Barcelona and Madrid kept their tapas behind glass cases along the bar, in San Sebastian, the pintxos were beautifully laid out for all to see, covet, and drool over. The Astronomer and I dedicated one evening to exploring the city’s pintxos scene. We had a list of buzzed-about places in hand, but in the end, we trusted our eyes and noses to lead us in the tastiest direction. 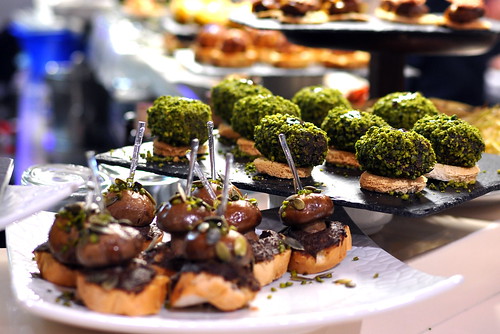 Our first stop on the San Sebastian pintxos crawl was Bar Zeruko. We hadn’t planned on dropping in here, but the extensive collection of colorful and unique pintxos on display proved impossible to resist. The Astronomer and I ordered two glasses of cava and tucked into a few choice morsels. We tried to limit ourselves to one dish apiece, but ended up greedily hoarding more. 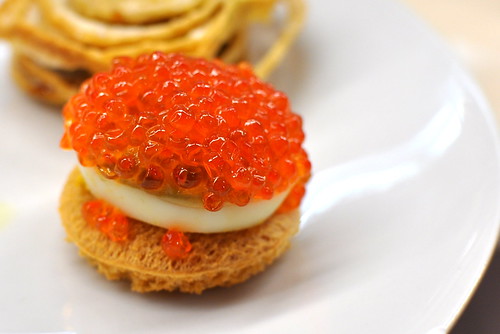 Our first bite was an egg-on-egg extravaganza consisting of fluorescent caviar paired simply and successfully with a slice of hard-boiled egg. 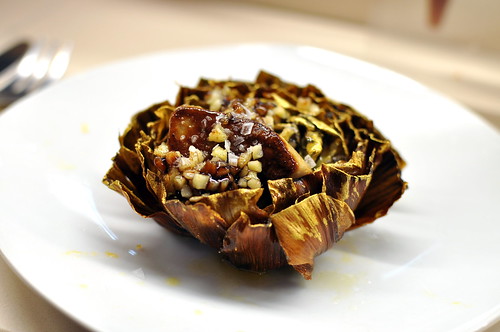 Next, The Astronomer picked out an artful artichoke that the barman said required “reheating” in the kitchen. When the chef brought the artichoke back to its rightful position in front of us, we found that it had been stuffed with seared foie gras and sprinkled with hazelnuts. Swoon! 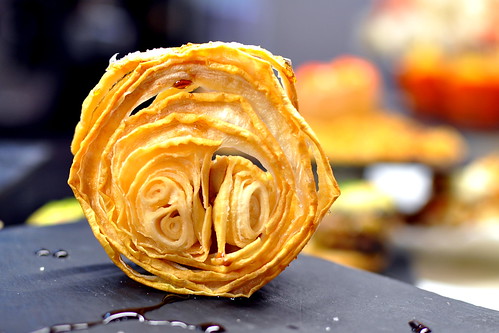 Seeking out another hit of fatty liver, I chose an intriguing creation comprised of  foie gras sandwiched between two slices of fried onions. The onion’s sweet and caramelized flavors went surprisingly well with the foie gras. 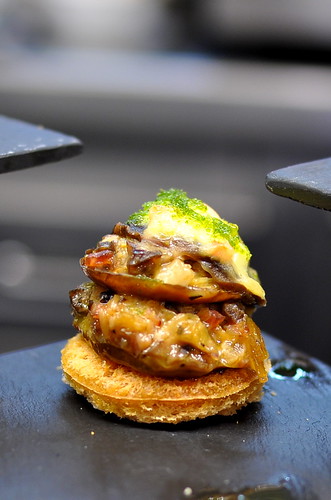 Finally, a savory bomb of bechamel, bacon, and mushrooms. The barman reheated it in the oven for a few hot minutes before serving up the immensely satisfying bite. 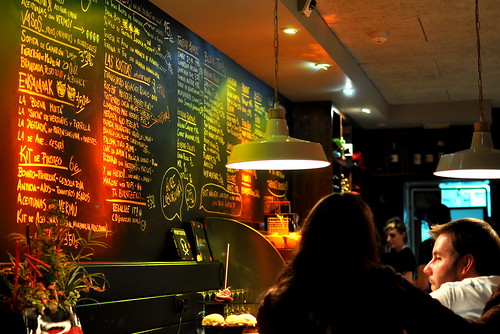 It was damn difficult pulling ourselves away from Bar Zeruko and its heavenly spread, but A Fuego Negro was calling our names. A Fuego Negro came highly recommended to us by Bruce Palling, a travel and food writer for the Wall Street Journal. The joint is owned by a trio of young restaurateurs who have worked in some of the best kitchens in town. 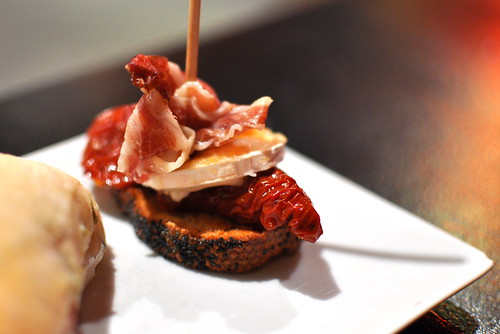 To start, The Astronomer grabbed some bites from the bar because the house special pintxos needed to be prepared to order. He picked out a ham sandwich on olive bread and a toothpick-speared bite consisting of a toasted baguette round, sun dried tomato, and a slice of luxurious local ham. 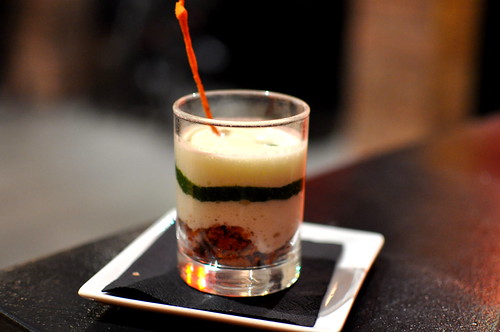 From the “glasses” portion of the menu, we chose a cod brandade with red pesto and basil. It was a bold-flavored concoction, but the mode of delivery didn’t do it for me; the liquid disappeared much too quickly from my tongue. 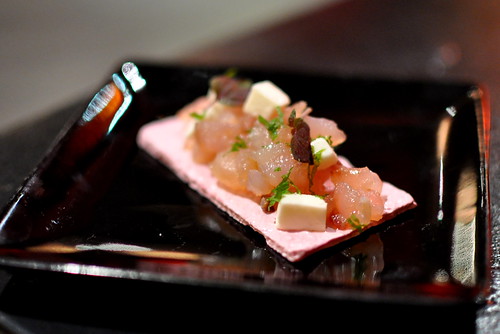 One of the neatest bites was the txitxarro, queso de oveja y menta en tosta de cereza. The chopped bits of fish were served on a pink cherry wafer and adorned with cubes of sheep’s milk cheese and fresh mint. 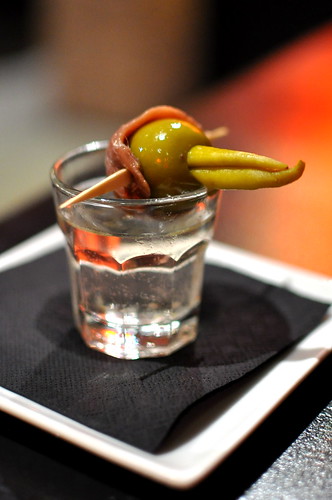 Our last bite was a shot of Basque white wine served with a gilda (lollipop) made of olive, anchovy, and Basque pepper. The potent hit of booze was tempered by the salty and spicy lollipop. 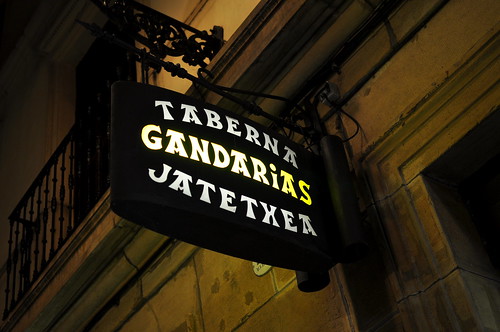 Before calling it a night, we made one last stop at Gandarias Taberna. The bar was packed with locals doing what they do best—eating, drinking, and having a ball. 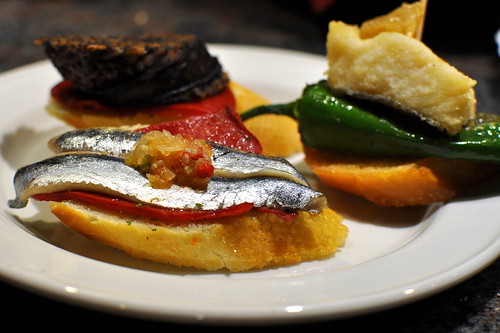 While Bar Zeruko and A Fuego Negro specialized in modern pintxos, the Taberna played strictly along traditional lines. We picked out three bites including sardines with roasted red peppers, blood sausage atop toasted bread, and fried fish with shishito pepper. The warmly spiced blood sausage was my favorite, while The Astronomer liked the fried fish.

We stumbled back to our hotel room properly full and slightly tipsy. All was right with the world.