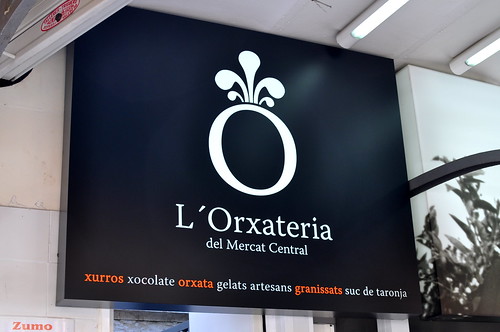 I learned all about carnecerias (meat markets), dulcerias (candy stores), and panaderias (bakery) in high school Spanish class, but my teacher never mentioned anything about orxaterias (horchata bars). As a die hard horchata lover, I was thrilled when we encountered a store specializing in the milky beverage just outside  the Mercado Central de Valencia. 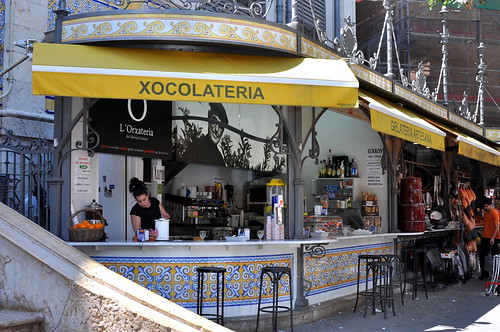 After spending the afternoon searching for the perfect paella pan and seeking out good deals on saffron, The Astronomer and I were eager to kick back and relax over chilled glasses of the city’s most famous beverages—orange juice and orxata. [By the way, “orxata” is the Catalan spelling of the word.] We pulled up two stools and ordered a glass of each. 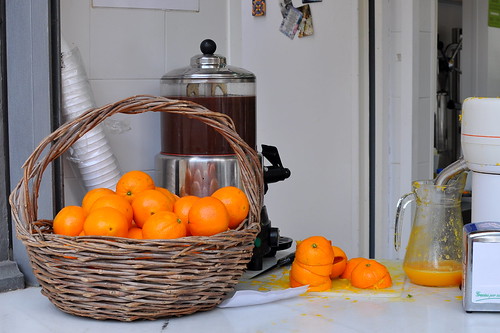 Squeezed to order, the orange juice tasted perfectly balanced without any added sugars. It’s no wonder that these locally grown, thin-skinned, and nearly seedless oranges are so popular for making juice. It was so very refreshing! 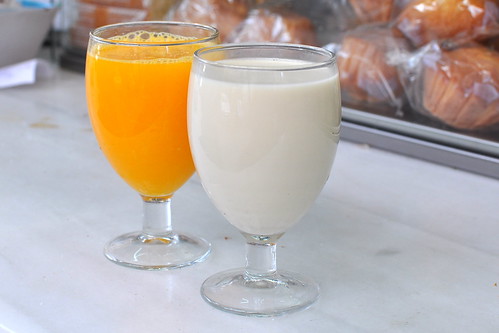 Made from tigernuts, water, and sugar, orxata originated in Valencia during the period of Muslim presence from the 8th to 13th century. I grew up drinking Mexican horchata made with rice milk and laced with cinnamon and was expecting something similar with this version. Valencian orxata has many of the same qualities as Mexican horchata—namely it was milky, sweet, and thirst quenching. However, the absence of cinnamon made for a different experience, and tigernuts have a distinct flavor that was unlike anything I’d ever tasted. We both liked it quite a bit, but the Mexican version is still our favorite.

With orxata and orange juice crossed off of our Valencia to-eat list in one fell swoop, it was time to sample the city’s most famous dish of all—paella!