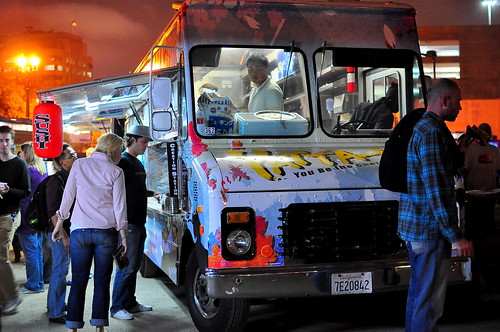 I was initially frightened by the thought of cheeseburger sushi. Both dishes are delicious in their own right, but combining them seemed like a terrible, half-baked idea. As positive reports rolled in from Serious Eats, Grub Street, and Squid Ink, my fear transitioned to intrigue. I eventually succumbed to my curiosity and tasted Yatta-! Truck‘s headline-grabbing roll at this month’s Downtown Art Walk. 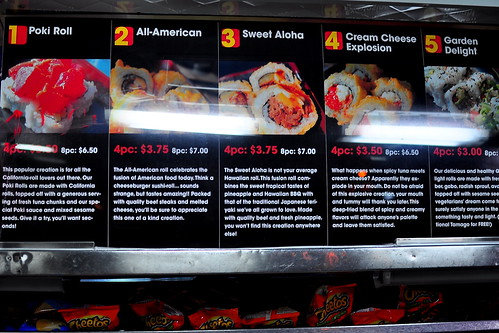 Owned and operated by Jun Hua and chef Hiro Igarashi, Yatta-! is L.A.’s first fusion sushi bar on wheels. The truck offers a small menu of inspired rolls, as well as a “creation station” that allows customers to dream up a customized roll. Yatta-!, which means “I did it!” in Japanese, is what one is supposed to proclaim when “u get ur own favorite rolls.” Or something like that… 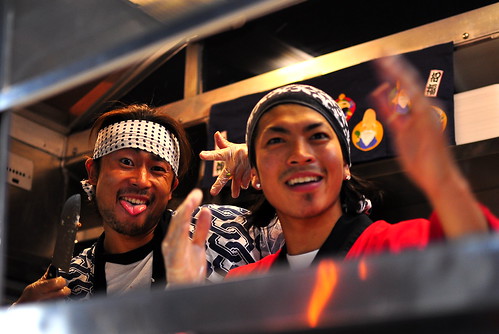 Yatta-! is far and away the silliest nouveau food truck that I have ever encountered. There’s a sign posted on the truck claiming that “no Pokemon were harmed during the making of your roll” and a mysterious ninja sneaks in and out of the truck during service. Not to mention, Yatta-! is staffed by some really funny dudes. I must say that it’s  pretty refreshing to be around an establishment that doesn’t take itself too seriously. 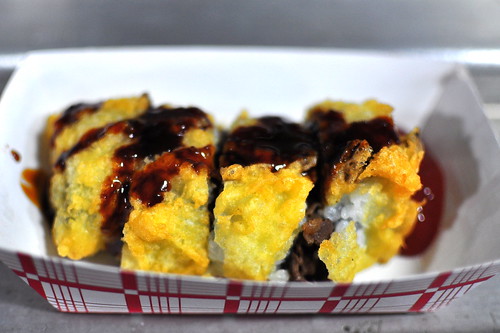 We started off with the Sweet Aloha, which “combines the sweet tropical tastes of pineapple and Hawaiian BBQ with traditional Japanese teriyaki” (4 pieces for $3.75). 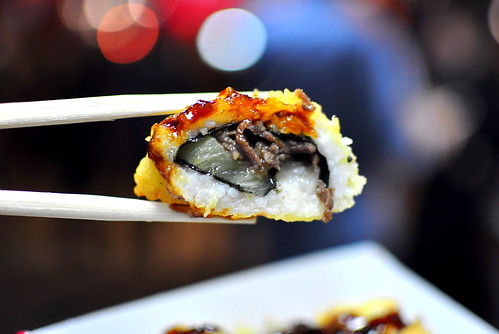 The entire roll was dipped in a light tempura batter and deep-fried till golden. The finishing touch was a teriyaki glaze on top. My favorite element of the roll was the juicy and tart pineapples that kept the grease-factor in check. 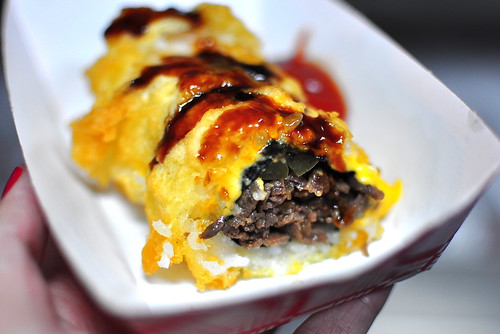 The roll that I had been waiting for was the All American (4 pieces for $3.75). The cheeseburger-inspired roll was comprised of sliced beef, pickles, and cheese wrapped in seaweed and rice, then deep-fried and served with ketchup and mustard. It tasted exactly like those little McDonald’s hamburgers, but with a crunchier and beefier profile. I applaud Yatta-!’s creativity.

Personality and shtick aside, the food aboard Yatta-! wasn’t nearly as awful as I had anticipated. As far as heart attack-inducing fare goes, it was actually quite pleasant.