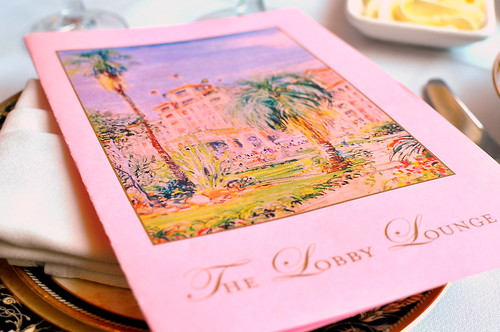 Many moons ago, The Astronomer and I won a Blogger Prom raffle prize for chocolate afternoon tea for two at The Langham. We were thrilled to take home such fine swag, but for reasons inconceivable at the moment, the voucher sat unused for almost a year. A week before our prized prize was set to expire, The Astronomer and I finally made a proper reservation and cleared our calendars. When Sunday rolled around, we drove down the street, handed off our wheels to valet, sauntered over to the Lobby Lounge, and readied ourselves for a parade of dainty delights. 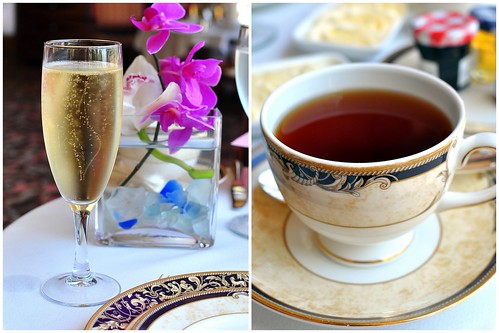 The Langham offers a special chocolate afternoon tea service every Sunday from noon to 4 PM. The price is $59 for adults and $29.50 for children. Our midday indulgence began with chilled glasses of Krug champagne. I love how bubbly has the power to transform any old occasion into a celebratory one. Cheers to that!

For my tea, I selected the pear caramel, which was made with Washington State pears blended with black teas from Ceylon and China. It was a touch sweet with hints of vanilla and caramel. The Astronomer’s chocolate mint truffle tea made with rooibos was legitimately chocolatey, while the mint gave it a soothing quality. 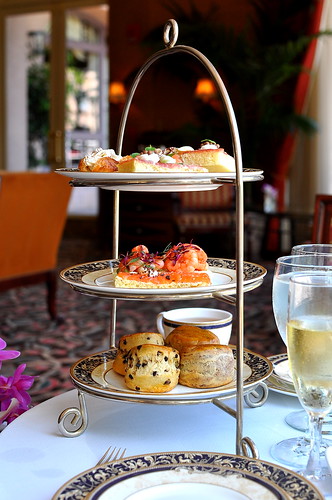 As we sipped and chatted, a three-tiered tower arrived at the table. There are many reasons to adore afternoon tea, but my personal favorite are these imposing presentation pieces. 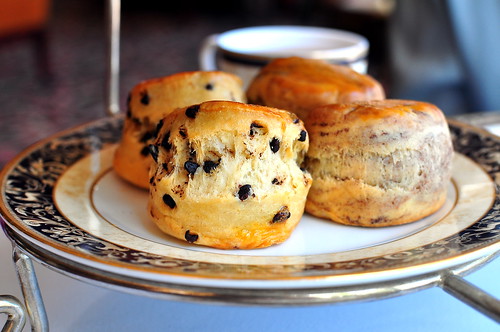 The bottom tier contained chocolate chip and chocolate marble scones, along with small dishes of Devonshire cream and lemon curd for spreading. The scones’ texture could’ve been moister, but it was nothing that a little clotted cream couldn’t fix nicely. 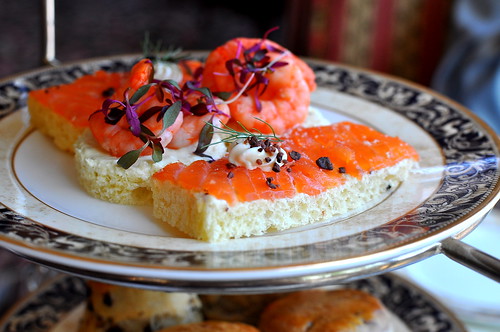 The middle tier contained two sweet-sounding nibbles that were  ultimately quite savory. The “white chocolate and avocado mousse with vanilla marinated shrimp” was executed well enough, but I prefer my shrimps served warm and translucent. The “smoked salmon, roasted fennel, and cocoa nib mousse” open-face sandwich was a tasty mix of rich and salty. However, two small bites of smoked salmon wasn’t nearly enough for me. 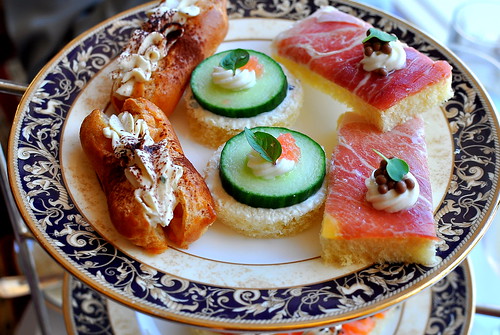 The top tier contained another set of sweet-sounding, savory finger foods, including “foie gras mousse profiteroles with chocolate dust,” “cucumber rounds with white chocolate mint mousse and grapefruit,” and “Serrano ham open-face sandwiches with burrata mousse and chocolate caviar.” The cucumber number was too thickly sliced, while the profiterole and ham were just lovely. 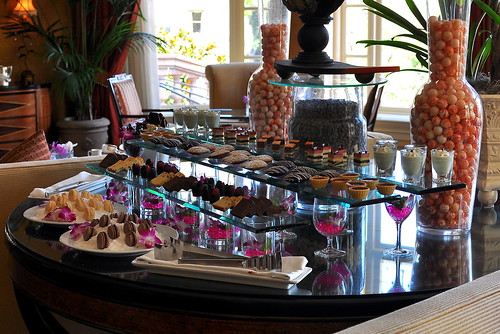 After we finished up our tiers of joy, The Astronomer and I were taken on a grand tour of the dessert table and fondue station. 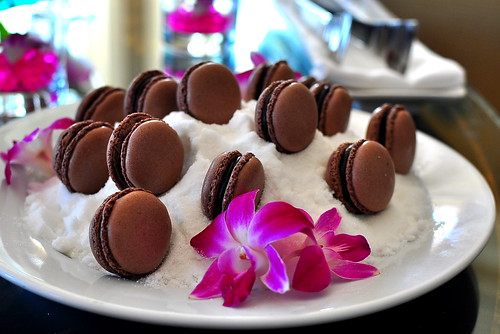 The spread was a feast for the eyes. There were two flavors of macarons on hand, chocolate and cocoa nib with Earl Grey butter cream. 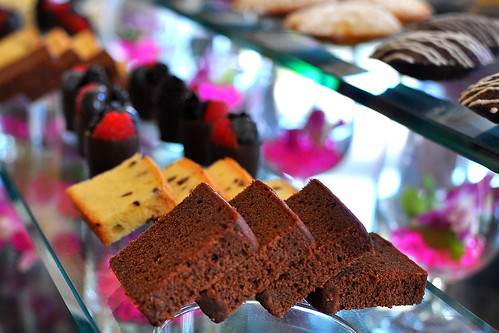 There were also slices of chocolate orange tea bread and lemon poppy seed bread with chocolate chips, as well as chocolate cream fruit tarts and madeleines. 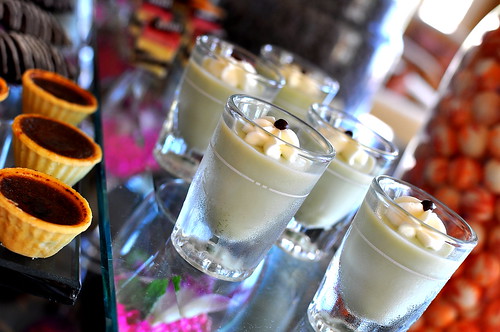 The best dressed of the bunch were the caramelized creme brulees and shot glasses filled with white chocolate green tea panna cotta. 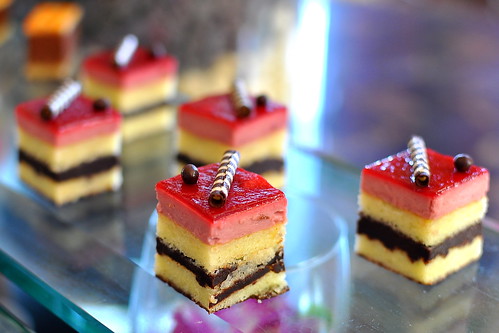 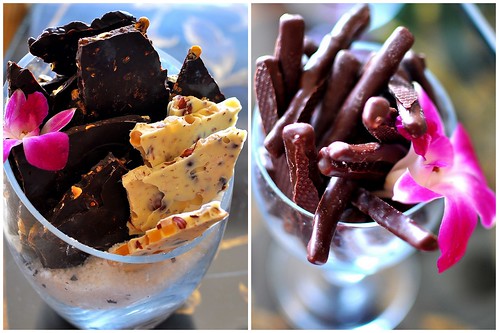 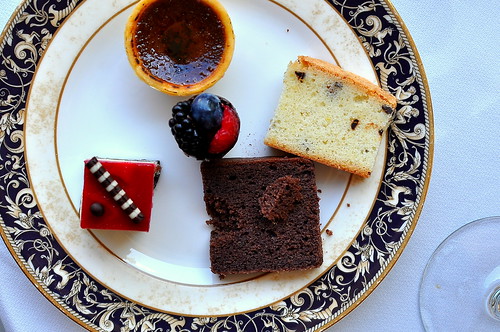 The Astronomer’s choicest morsels were the fruit tart and chocolate raspberry gateau. 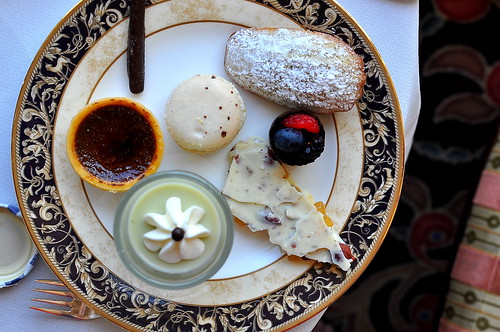 My top three were the cocoa nib with Earl Grey butter cream macaron, orange black tea madeleine, and orangette. The only bite I really disliked was the creme brulee. Poor texture in the crust and custard department, coupled with a lack of caramelization on top, made for a sad little creme brulee. 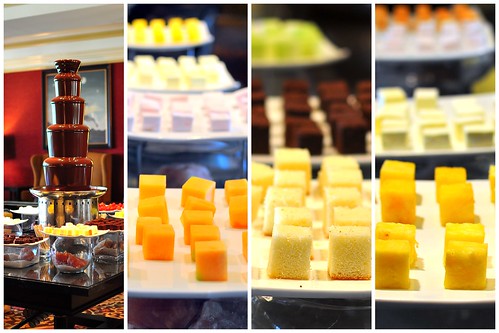 Next, we moved onto the fondue station. The cascading chocolate fountain was surrounded by all sorts of neat treats for dipping—nougat, fruits, cakes, and house-made marshmallows. 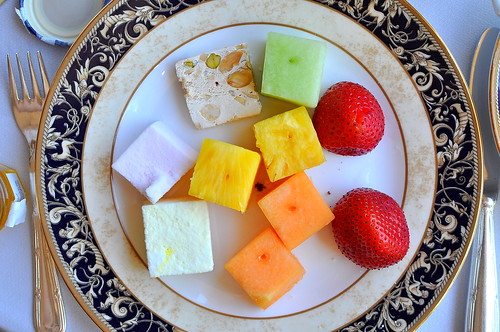 I ditched the chocolate sauce altogether and picked up some fresh fruit, nougat, and marshmallows to finish. The peppermint and lemon flavored marshmallows were easily the best items on my plate—so pillowy and wonderful! The nougat paled in comparison.

There are few things in this world more pleasurable than enjoying afternoon tea in a pretty room (while speaking with a faux British accent).

18 thoughts on “Chocolate Afternoon Tea at The Langham – Pasadena”