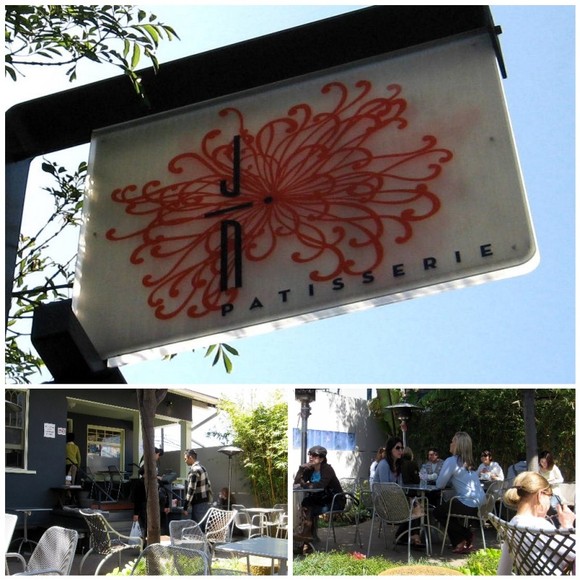 Jin Patisserie is a chick magnet.

Offering handcrafted chocolates, dainty sandwiches, artisanal teas, and painfully beautiful cakes, it’s no surprise that Jin has to fight females off with a stick.

I visited Jin Patisserie with my gal pals Laurie and Bex one sunny Saturday afternoon. Jin’s famously soothing courtyard was fairly empty when we arrived, so we had our pick of tables—we chose one in the sun.

After hemming and hawing over the menu long enough for our waitress to look slightly peeved, all three of us settled on the lunch set. The set included a sandwich of our choice, green salad, chips, and the Cake of the Day. 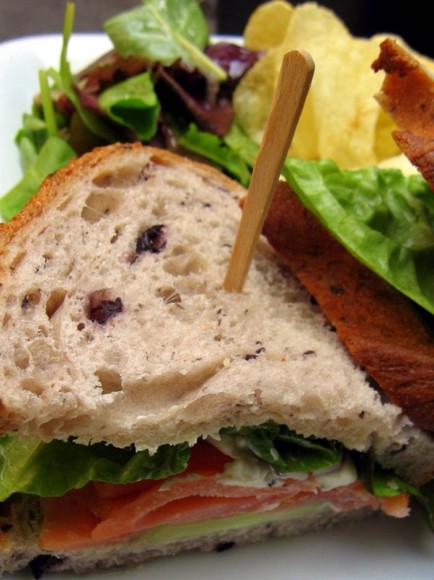 Bex and I selected the smoked salmon sandwich ($15.50); Bex ordered hers on white bread, while I chose an olive loaf. In addition to smoked salmon, the fixins included thin slices of cucumber and onion, Romaine lettuce, and a shmear of cream cheese. Bex and I liked the sandwich very much, but truth be told, there are limits to how good a cold sandwich can be. 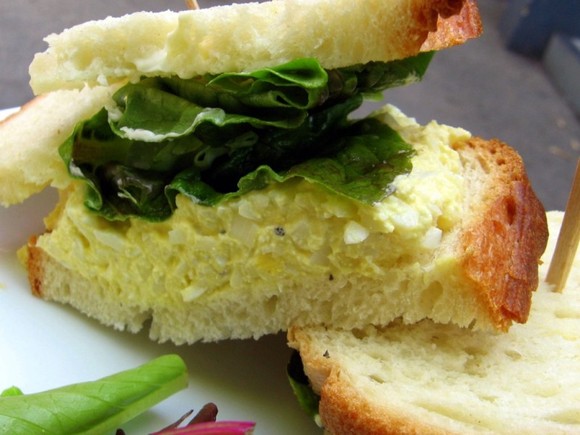 In regards to the sides, all three of us agreed that the chips tasted just like Lay’s. Laurie desired and expected something more “la-di-da and homemade tasting.” The salad was uninteresting rabbit food. In fact, it was so boring that Bex couldn’t even bring herself to eat it. 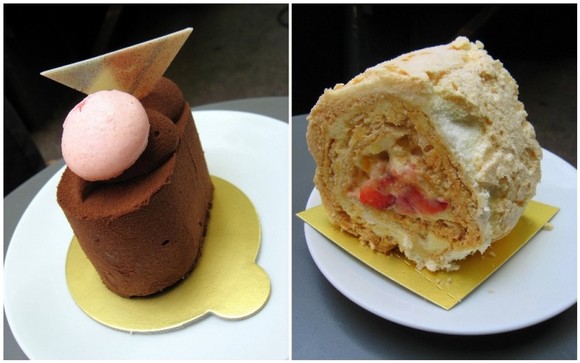 The highlight of our Jin Patisserie outing were the cakes. Kristy Choo, the proprietor, learned about food while growing up in Singapore and traveling regularly to Japan as a flight attendant. Her desserts have a distinct style that is aesthetically interesting and palate pleasing.

The Cake of the Day on our visit was a Lavender Gateaux (lavender butter cream layered with dark chocolate ganache on lavender sponge). The Lavender Gateaux didn’t appeal to any of us, so we accepted the $3 surcharge to substitute it for delights that better suited our fancy.

Bex chose the Inspiration (left – soft caramel with bitter-sweet chocolate with a touch of sea salt), while Laurie and I selected the Spring Bouquet (right – fluffy meringue, light exotic cream, fresh mango, and strawberries), which is served on weekends only.

Bex was thoroughly delighted by her Inspiration. The small nibble I had was salty and lovely. Laurie and I adored our Spring Bouquet as well. Laurie said that it was the lightest dessert she’d ever eaten and that it tasted like a sunny day. I agreed on both fronts.

As we paid our bill, Bex, Laurie, and I agreed to return to Jin Patisserie again. However, next time around we’ll lunch elsewhere because even though the cakes here truly take the cake, the sandwiches don’t offer enough bang for our buck.