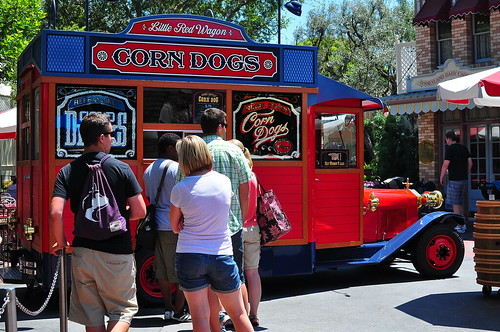 Banh mi has been synonymous with Disneyland for me for as long as I can remember. Growing up, my mom always purchased a couple of sandwiches from the local deli for my brother and me to eat while visiting the park. Bringing our own lunches was not only economical, but also perfectly delicious for our Vietnamese-trained taste buds.

I’ve continued this tradition as an adult because a parade of junk food can’t compare with a taste of home. Or so I thought… All was well in my brown bagging world up until a few months ago when I heard rumblings that Disneyland was a noteworthy dining destination. From the freshly made corndogs on Main Street U.S.A. to the deep-fried Monte Cristo sandwiches in New Orleans Square, the food at Disneyland suddenly piqued my interest.  A full investigation was in order. 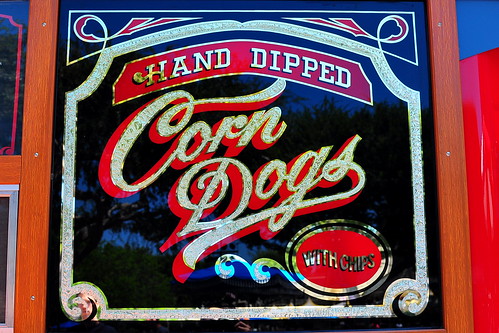 It saddened me a little walking into the park without my usual bag of banh mi sandwiches, but one whiff of the Little Red Wagon corndog cart and the matter was completely forgotten. Located just beyond Main Street toward Tomorrow Land, the Little Red Wagon dishes out battered and fried wieners from morning until night. The Astronomer and I made a bee line for the cart as soon as we entered the park. 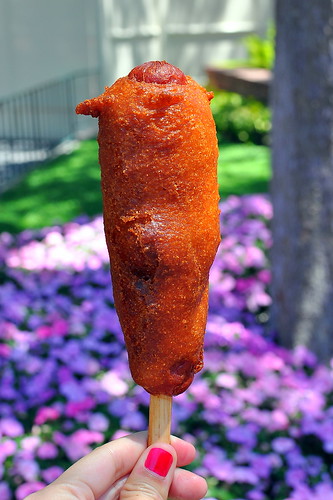 After enduring a fifteen minute long wait, we were rewarded with the world’s best corndog ($5.79). The exterior was deep-fried to a delectable golden brown, while the hot dog was juicy like you wouldn’t believe. What set this corndog apart was the thick layer of breading hugging the dog that somehow managed to crisp up nicely and yet remain fluffy too. It also had very distinct cornmeal notes that I really liked. Truly, Disney’s creation was  heads and shoulders above every corndog I’ve ever eaten. Even the  grease dribbling down the stick and onto my fingers didn’t detract from the awesomeness. 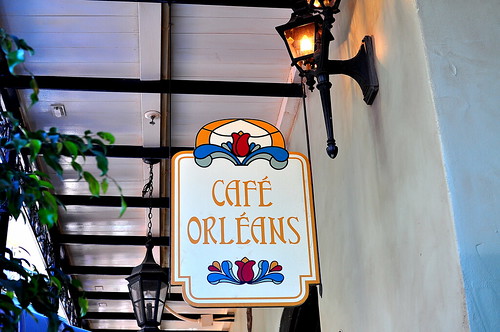 After working off the hefty corndog by circumnavigating the River of Americas via canoe, The Astronomer and I were ready for lunch. Cafe Orleans is one of two full-service restaurants in the park that serves Disney’s famous Monte Cristo sandwiches (the other one is Blue Bayou). Without advanced reservations, we had to wait fifteen minutes for a table to open up. 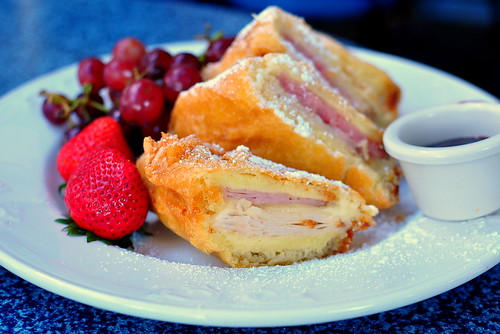 Adapted from the classic French croque-monsieur, the Monte Cristo ($15.99) is a turkey, ham, and Swiss sandwich that is  battered, fried, and sprinkled with powdered sugar. A berry puree is served on the side for dipping. The weighty concoction, which resembles a doughnut more than a sandwich, has been served at the park since 1966.

There was a lot to like about the Monte Cristo. For starters, the interplay between sweet (powdered sugar), savory (ham and cheese), and tart (berry puree) was really fabulous. I also appreciated the light and crisp egg batter coating. Each gut-busting triangle was a little guilt-inducing and a lot tasty.

I liked the sandwich very much, but I’d be hesitant to order it again. I would be more enthusiastic about indulging on a return visit if the Monte Cristo were available at a casual, grab-and-go type of eatery. I didn’t like wasting an hour or so with a sit-down meal. Also, it would be nice if the portion was halved along with the price. 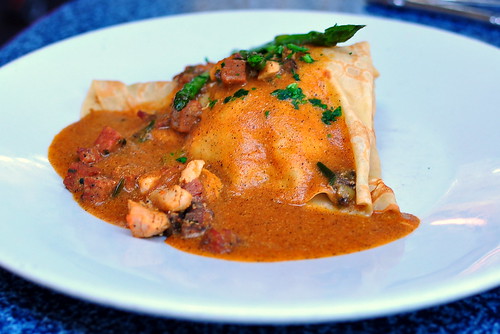 The Astronomer ordered a chicken and gumbo crepe ($15.99), which was served with asparagus spears. The gumbo’s savory spiciness was just the thing to balance out the wickedly sweet Monte Cristo. 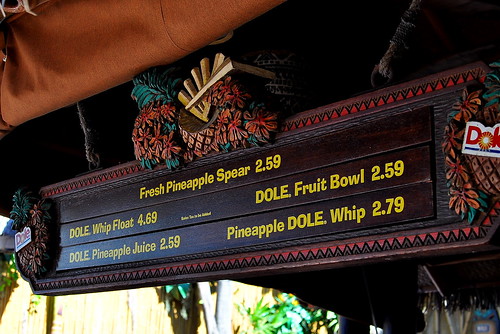 I was nowhere near hungry after downing a corndog and a Monte Cristo in the span of a few hours, but managed to make some space for a Dole Whip for “research” purposes. 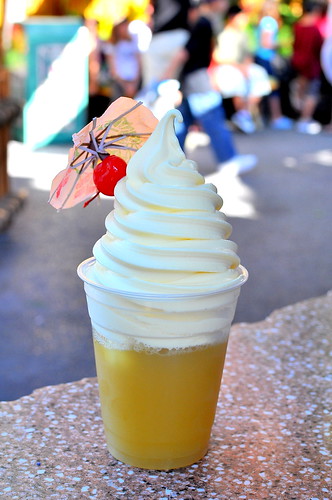 Dole Whips are sold outside of the Enchanted Tiki Room in Adventureland. I was initially planning on a plain Dole Whip, but settled on a Whip Float ($4.69) because it sounded mighty tempting. The sweet and creamy pineapple-flavored soft serve paired tremendously with the tangy and tart juice. The Whip Float was well-balanced and refreshing. 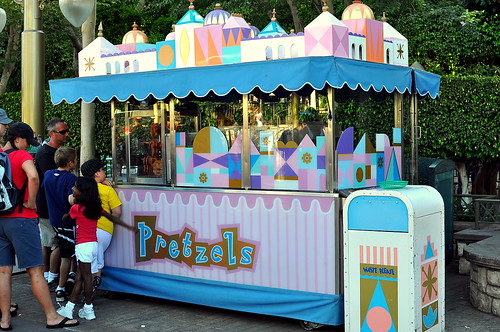 My final stop on the Disney junk food express was at the pretzel stand in Fantasyland. 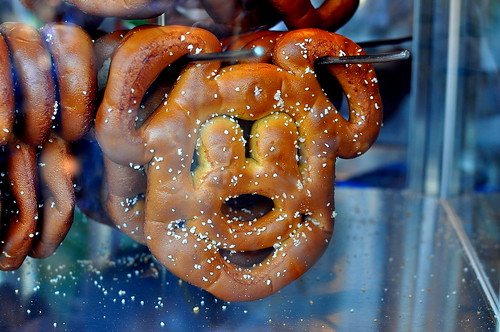 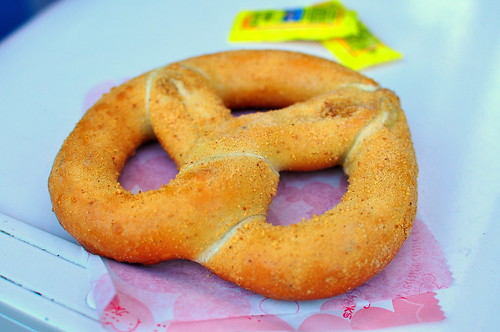 I was expecting the pretzel to taste similar to a bagel with cream cheese, but instead it tasted more like a cheese Danish.  The sweetness took me by surprise, and I never really recovered. Next time around, I’m swinging by Frontierland for a jalapeno and cheese-filled pretzel. 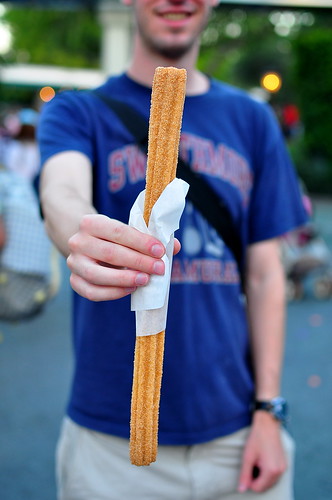 The Astronomer couldn’t leave Disneyland without a cinnamony churro in his belly.

I had a fantastic time eating my way through Disneyland, but I can’t see myself abandoning my beloved banh mi in the long run. There will definitely be more corndogs in the future, but the rest I can do without.

24 thoughts on “Disneyland: Home of the World's Best Corndog”