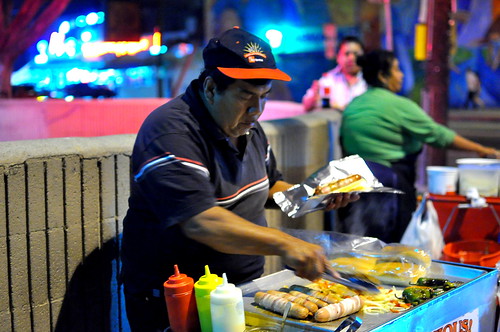 Moonlighting as a food photographer has taken me to some of Los Angeles’ finest dining rooms, dingiest streets, and seemingly everywhere in between. I love how the unpredictable nature of this job never fails to keep me on my toes. Earlier this summer, I was commissioned by Farmer John to prepare and photograph a local delicacy known as a Danger Dog. It consists of a bacon-wrapped hot dog nestled inside a bun and topped with sauteed onions and peppers, squiggles of mayonnaise, ketchup, and mustard, and finished off with a grilled jalapeno pepper.

I have had ample opportunity to indulge in this classic street-side offering, but for some reason or another, never bit the bullet. I mostly blame sobriety for this grave misstep. When the assignment arrived in my inbox, I felt that it was absolutely essential to seek out a Danger Dog in order to truly understand its flavors, textures, and nuances. And so late one Thursday night, The Astronomer and I hit the streets of Los Angeles to conduct some field “research.” 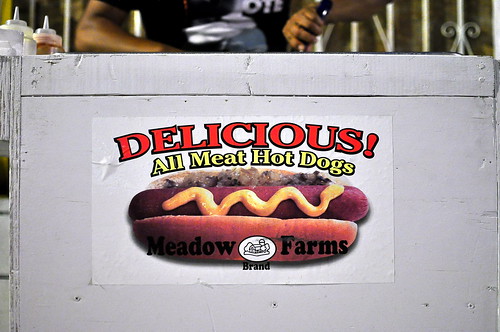 I received a tip via Twitter that York Boulevard in Highland Park was a hotbed for Danger Dogs. As The Astronomer and I cruised down the boulevard, we saw a bevy of taco tables, a handful of taco trucks, and one lone Danger Dog dealer. 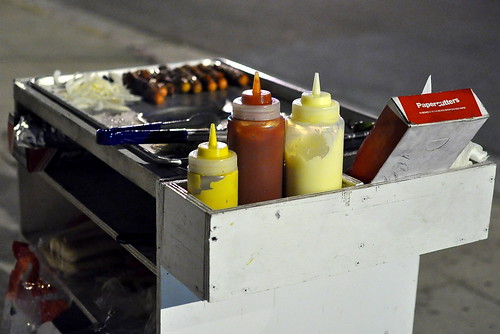 Parked outside a nightclub, the cart was gearing up for the impending crowd of revelers when we pulled over for a taste. Luckily, The Astronomer and I beat the rush and scored a dog before the club kids came onto the scene.

As the vendor was preparing our wares, I paid close attention to his technique and mise-en-place. After all, I was to recreate the magic in my kitchen the following day. 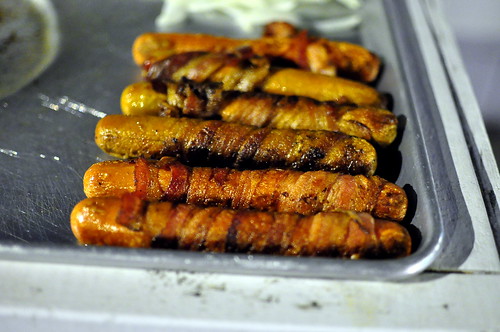 After crisping the bacon and searing the hot dogs, the vendor set them aside and sauteed some sliced onions and a minced jalapeno in the remaining oil. Infusing the onions and chilies with the bacon grease tied the ingredients together in a savory and smoky perfume. 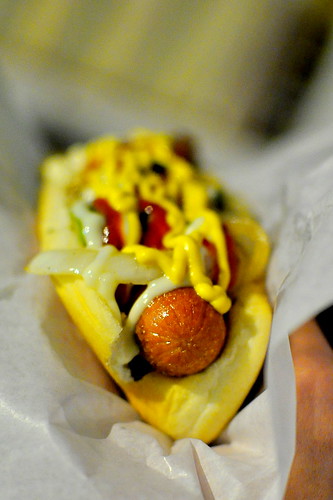 Presented on a sheet of parchment paper, the Danger Dog looked unbelievably enticing. I’ve never been much of a hot dog gal, but this one had my salivary glands on overdrive. The lightly toasted bun gave way to an avalanche of sweet, salty, spicy, and tangy flavors. It was a beast of a creation and the delivery was just as bold as I had hoped.

The Astronomer and I could’ve very well headed home after this success, but decided to seek out one more for research’s sake. 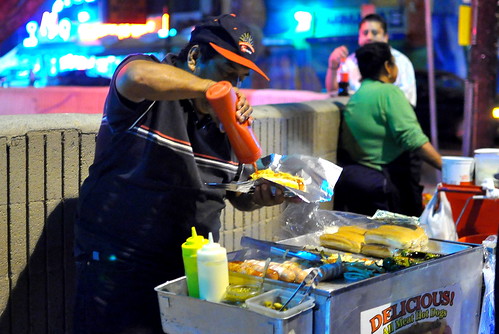 Stop number two brought us to Echo Park at the corner of Sunset and Echo Park Avenue, directly outside the Walgreens barricade. The line for Danger Dogs was six deep when we arrived. We lined up behind a trio of hipsters and a mom with two kids. 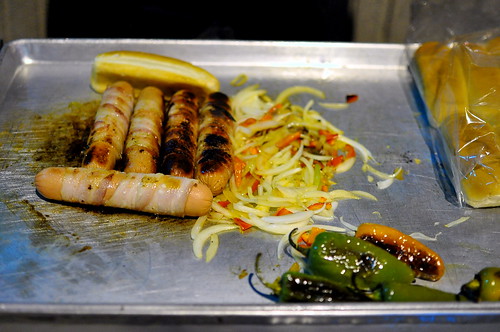 This fellow’s set up varied slightly from the one before. Sliced red bell peppers were sauteed along with the onions, while the jalapeno peppers were seared and left whole. 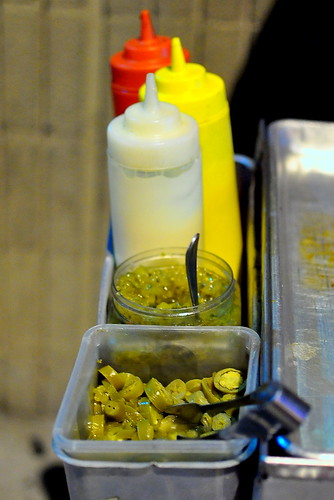 He also had relish and pickled jalapenos on hand for customers to garnish with. 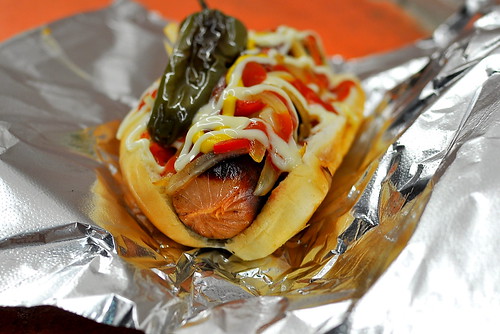 The Astronomer and I ordered one with everything and left the relish and pickled jalapenos for the others. I found the whole jalapeno atop the fully dressed dog a little difficult to maneuver, but loved the rush of heat with each bite. After downing two Danger Dogs back-to-back, I finally felt prepared to execute my assignment. 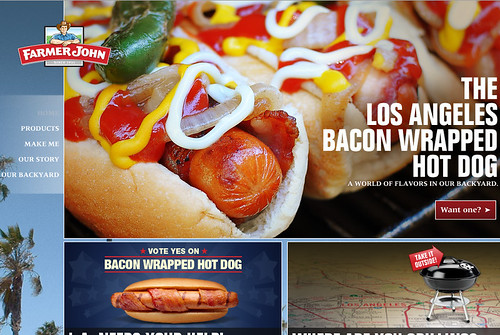 And here’s the money shot that Farmer John chose to use on their website. I just may have a future as a Danger Dog vendor. All in a day’s work…

[By the way, Farmer John is campaigning to make Danger Dogs the “Official Hot Dog of Los Angeles.” Rock the vote here if you agree. Best of all, Farmer John will donate one pound of food to local food banks for each vote received! Join the fun on Facebook and Twitter (@LABaconDog), too. Go, Danger Dogs!]

22 thoughts on “Danger Dogs: Blurring the Line Between Work and Play”