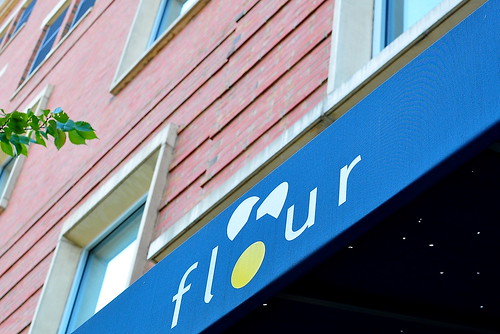 While most of my ideas on where and what to eat are culled online through blogs, Tweets, and food pages, I occasionally find inspiration on the telly too. An especially memorable episode of Bobby Flay’s Throwdown that aired sometime in 2007 brought Boston’s beloved Flour Bakery + Cafe onto my radar. After seeing Chef Joanne Chang swiftly kick Bobby Flay’s buns during a Sticky Buns Throwdown, I made a mental note to visit here on my next visit to Beantown. Considering how infrequently I tune into the Food Network, its content  is surprisingly influential. 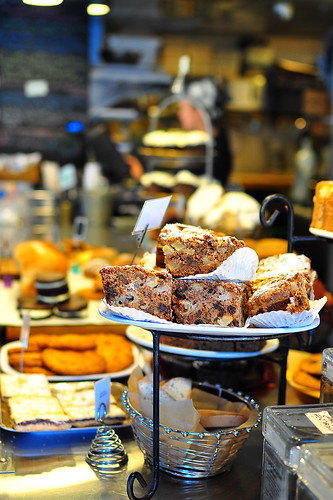 The Astronomer and I, along with The Astronomer’s sis Rosalind, visited the original South End location on our first day in the city. Chef Chang opened the bakery in 2000 after leaving a career as a management consultant and baking in some of New York (Payard Patisserie and Bistro) and Boston’s (Biba, Bentonwood Bakery, Rialto, Mistral) top kitchens.

After the success of the original Flour, Chef Chang opened a second branch in 2007 in the Fort Point Channel area and a third one in 2010 in Cambridge near MIT and Central Square. 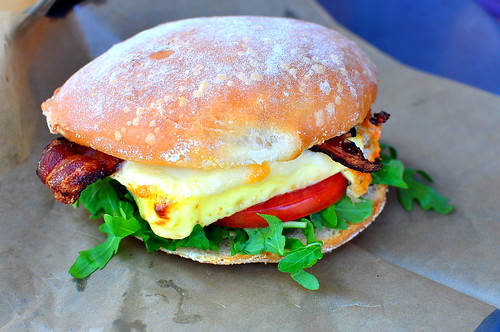 As luck would have it, my friends the Two Hungry Pandas visited Boston a few weeks before me and tipped me off on Flour’s terrific egg sandwich ($6.50). Served with cheddar cheese, tomato, arugula, dijonaise, and a choice of ham or bacon, the sandwich was as perfect as Evelina had promised. The elements that rocked most were the silky fried egg and the perfectly ripe tomato slice. Not to mention, the sturdy yet pliable focaccia and smoky bacon strips. Truly, I could go on and on… 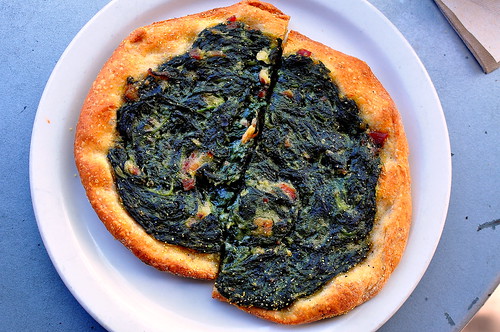 The Astronomer’s creamed spinach pizza on whole wheat crust ($5.50) didn’t look the part of a moreish pie, but it certainly was delicious.  Hidden beneath the luscious layer of creamed spinach were thick chunks of smoked bacon. I loved how the pizza masqueraded as a healthy choice, but actually was a decadent and satisfying little creation. 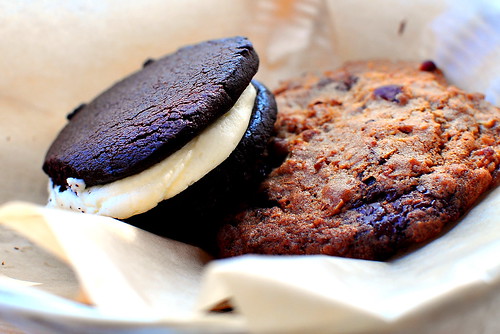 For dessert, the three of us shared two cookies. I picked out the homemade Oreo, while Rosalind requested the Chunky Lola. Just like the original, Flour’s Oreo was comprised of two chocolate cookies held together by a creamy filling. The cookies tasted nearly identical to those made in the Nabisco factory, while the filling was over-the-top sweet. Both Rosalind and I felt our molars rotting some with each cloying bite. The Chunky Lola, which contained oatmeal, chocolate, and pecans, was better balanced but also less exciting. 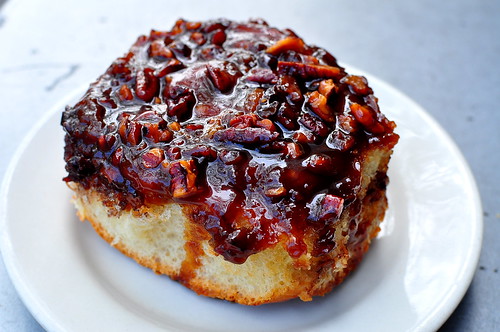 We waited nearly an hour for our highly-anticipated Sticky Sticky Bun to arrive; it was a glorious moment when its royal gooeyness hit the table. The bun was made from a brioche dough, while its topping was a calculated mix of butter, salt, brown sugar, honey, cinnamon, and pecans.

Truth be told, the Sticky Sticky Bun wasn’t at all how I anticipated. I was hoping for an unrefined avalanche of doughy, cinnamon-y sweetness a la Cinnabon. I wanted a creation so sugary that it put me in a coma afterward. Instead, I was presented with a classy little number that showed restraint from top to bottom, inside and out. I liked the bun, but it wasn’t fireworks at first bite. However, The Astronomer and Rosalind were properly smitten.

Even though the Sticky Sticky Bun wasn’t a knock your socks off experience, I still dug Flour Bakery + Cafe very much. The vibe and staff were both lovely and the egg sandwich was a dream.