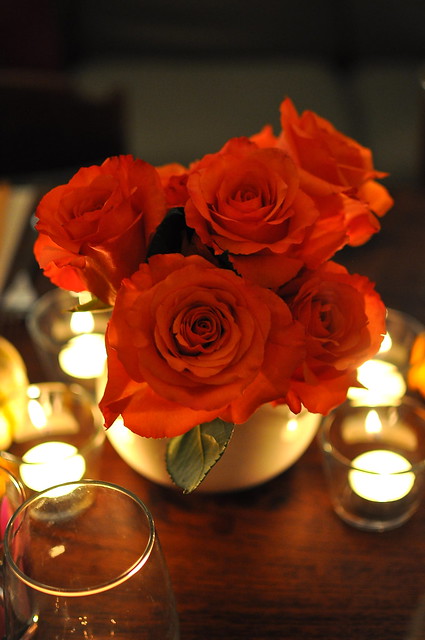 Underground supper clubs are all the rage these days in Los Angeles. While this style of dining has probably existed in some form for ages, it seems to have only gone mainstream this past year. With extensive coverage in several media outlets [see: Los Angeles Times, 944 magazine, and Toque], it’s no secret that Angelenos are embracing the art of eating in secret.

Dining illicitly is certainly intriguing, but the various unknown variables such as location, guests, menu, and price, have kept me from warming up to the trend. It wasn’t until I received a personal invite from fellow food blogger Elliott of F is for Food that I even considered attending one of these shindigs. When navigating unfamiliar terrain, a familiar face is most comforting. 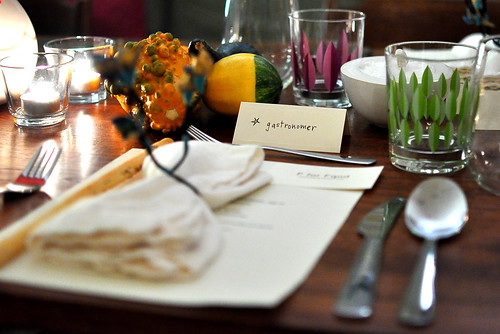 This past summer, Elliott began hosting monthly suppers from her home called Dinner at Eight. “Eight guests, four courses complete with wine pairings, once a month, under the stars in the hills of Hollywood,” promised the event’s website. “The food is seasonal and sourced primarily from local farmers’ markets and whatever I can yank from my garden. Guests arrive at 7 PM for cocktails and noshables. First course served at 8 PM.”

The Astronomer and I attended last month’s dinner where the theme was “It’s a Family Affair,” in honor of Elliott’s father, who was visiting from out of town. The menu featured a sampling of her father’s favorite foods. 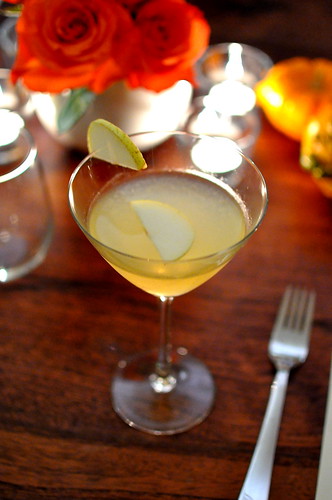 We arrived at Elliott’s home shortly past seven and were greeted with warm smiles and stiff cocktails. The St. Germaine pear martinis were sweet and just potent enough to break the ice in a room full of strangers. 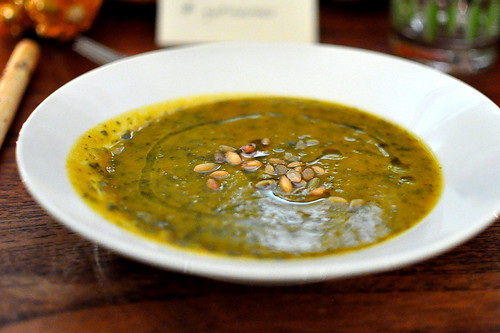 Sometime around eight o’clock, the first course arrived at the table. The butternut squash, kale, and white bean bisque came sprinkled with toasted pepitas and drizzled with sage oil. The simple and homey soup set the tone for the evening.

Jill Bernheimer of Domaine LA paired the soup with a 2009 Donkey & Goat Stone Crusher Roussanne. I passed on the wines this evening to allow The Astronomer to indulge. 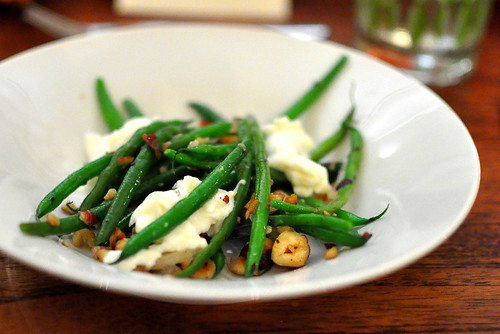 The second course, haricots verts with toasted hazelnuts and burrata, was paired with a 2008 Donkey & Goat Brousseau Vineyard Chardonnay. The Astronomer liked this dish quite a bit, but I found it bordering on too simple. Everything on the plate was good, but nothing stood out as outstanding. I wanted the flavors to pop. 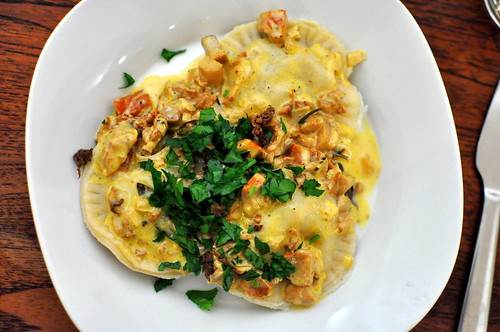 The third course was my least favorite of the evening. It consisted of  three ravioli stuffed with duck confit and pimiento mashed potato, topped with braised chanterelle and lobster mushrooms. I was highly anticipating this dish because handmade pastas are one of my all-time favorite foods.

Unfortunately, the ravioli’s texture was gummy and thick, while the filling and accompanying cream sauce were under-seasoned. The assault of parsley garnish didn’t help the situation at all. Supposedly, the ravioli were served intentionally toothy, but in all honesty, I’d never encountered anything this chewy in all my years of carbo-loading.

The ravioli was paired with a 2009 Donkey & Goat Broken Leg Vineyard Pinot Noir. 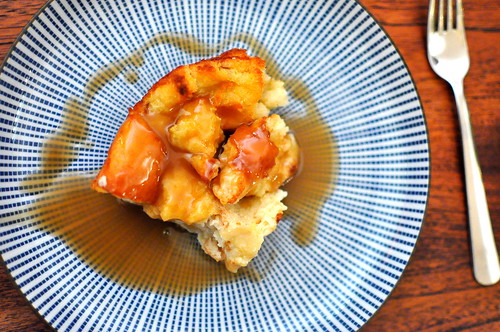 The kitchen bounced back nicely with a jaw-droppingly great dessert. Elliott’s mother prepared her famous bread pudding with a caramel rum drizzle. Unlike those dense paper weights usually masquerading as bread pudding, this one was light, fluffy, and moist in all the right places. The boozy caramel sauce was a lovely accompaniment. Dessert was served with the N.V. Caudrina Asti La Selvatica.

At the end of the evening, each guest received a white envelope and was asked to pay what they felt the meal was worth. The Astronomer and I found this portion of the dinner highly uncomfortable because the suggested donation was steeper than what we had in mind. In the end, we paid the amount that we felt was right and left it at that. Still, we couldn’t help but feel weird about the situation.

Monetary issues aside, I very much enjoyed my first experience eating underground. The people I met were outstanding conversationalists, the ambiance couldn’t be beat, and I’m still thinking about that bread pudding. I’m glad that I stepped out of my eating out comfort zone and look forward to doing it again really soon. Are you ready, Wolvesmouth?

Interested in eating underground? Check out these other Los Angeles-based supper clubs: On The Lamb Food & Beverage, Wolvesmouth, Chicks with Knives, Amy’s Culinary Adventures, and The Ghet.