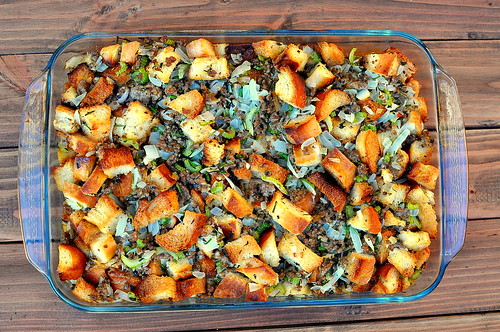 If I had my way, stuffing would be the centerpiece of Thanksgiving. An expertly roasted bird has its merits, as do silky potatoes dotted with butter and doused in gravy, but for as long as I can recall, my heart and stomach have belonged to stuffing. I grew up on the Stove Top variety that my aunt brilliantly doctored-up with onions, celery, and chicken gizzards. I later moved on to a gourmet version made with cornbread and dried fruit that my brother outsourced from his neighborhood Dean & Deluca. From low end to high end to everything in between, I’ve yet to encounter a stuffing that didn’t appeal to me.

While my soy sauce-brined turkey was roasting in the oven at 325 degrees, I got started on making the stuffing, which fortuitously called for similar temps. Preparing a turkey and stuffing all in one day was admittedly a lot of work for a first-timer, but it would’ve been a travesty eating a thirteen pound bird without some proper dressing on the side.

I chose a classic sausage, herbs, and French bread recipe from this month’s Cooking Light magazine. Its straightforward flavor profile and manageable ingredients list spoke to me, and I couldn’t have been happier with the results. The bread had an awesome custard-like consistency, while the trio of herbs perfumed each bite. The stuffing-specific sausage that I picked up from Trader Joe’s was too crumbly and mild for my taste, but it didn’t detract from the overall success of the dish. Next time, I’ll be sure to use my favorite spicy Italian sausage instead.

My mom’s already called dibs on stuffing for this year’s Thanksgiving feast, but hopefully next year I can share this gem with the fam. And for good ‘ol times’ sake, I’ll even add in some chicken gizzards. 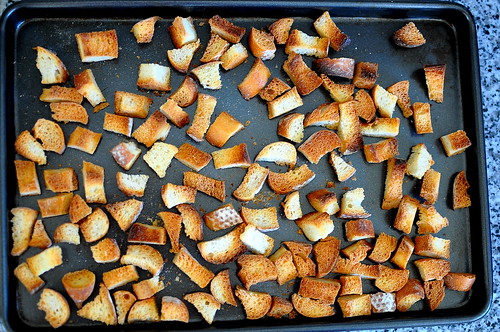 Preheat oven to 350°. Arrange bread in single layers on 2 jelly-roll pans. Bake at 350° for 20 minutes or until golden, rotating pans after 10 minutes. Turn oven off; leave pans in oven for 30 minutes or until bread is crisp. 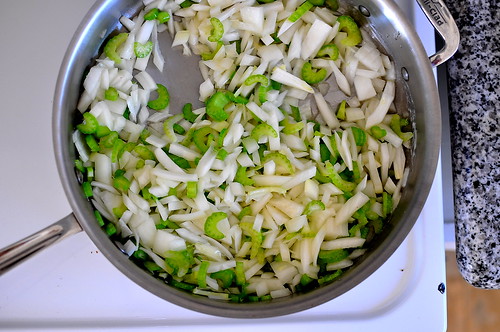 Melt butter in a large skillet over medium heat. Add onion and celery; cook 11 minutes or until tender, stirring occasionally. Transfer vegetables to a large bowl. Add sausage to pan. Increase heat; sauté 8 minutes or until browned, stirring to crumble. 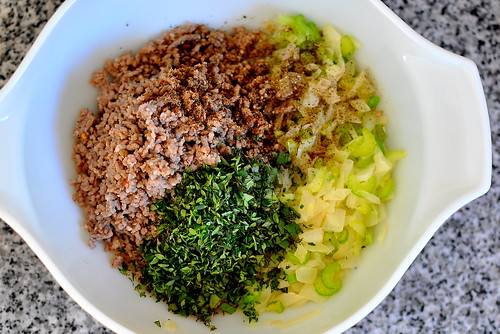 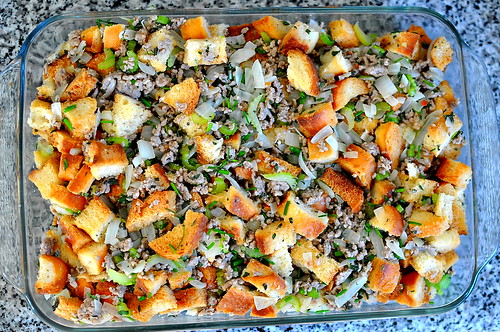 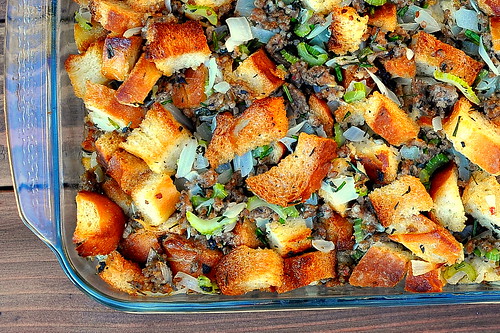