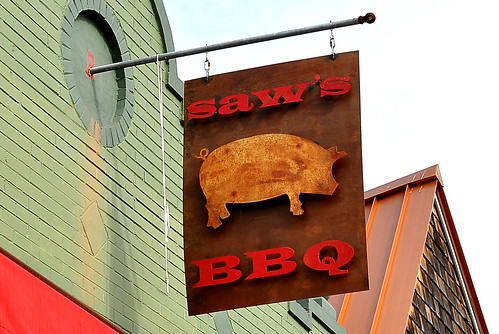 For our final restaurant outing of 2010, The Astronomer treated me to a meat fest of smoky proportions at Saw’s BBQ, a relative newcomer to the Birmingham barbecue scene. Joining us for the joyous occasion were select members of the Indian Springs School class of 2003. 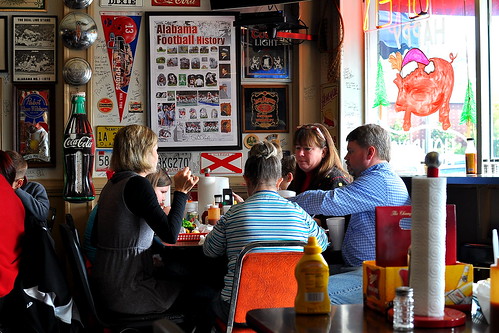 The man behind Saw’s BBQ is Mike Wilson, a North Carolina native with a diverse culinary background. After graduating from Johnson & Wales University in Colorado, he returned home to work for Dean & Deluca. He found himself in Birmingham a few years later after scoring a cheffing position in the test kitchen of Cooking Light magazine. 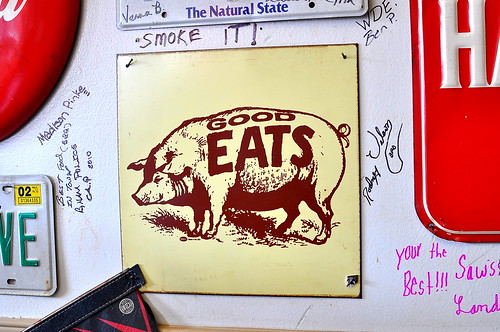 Chef Wilson initially began experimenting with making sauces and smoking meat as a hobby. After sharing his North Carolina-inspired creations with coworkers at Cooking Light, word quickly spread throughout the local food community, and demand for his sauce and meats caught fire.

Opened in 2009, Saw’s BBQ is a tribute to the great North Carolina barbecue tradition that the chef grew up eating. By the way, “Saw” is an acronym for “Sorry Ass Wilson,” the chef’s not-so-pleasant high school nickname. 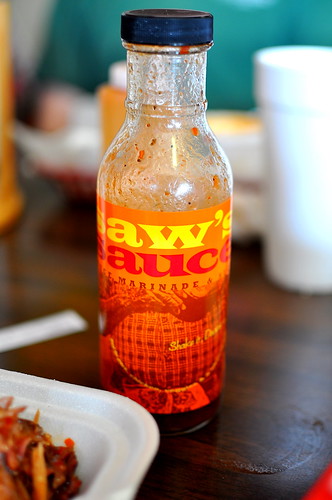 The centerpiece at Saw’s BBQ is a classic North Carolina vinegar-based sauce. It’s a tangy little number with just a dash of sweet. Glugged atop smoked meats of all stripes, it brightens up the plate and rounds out the flavors. 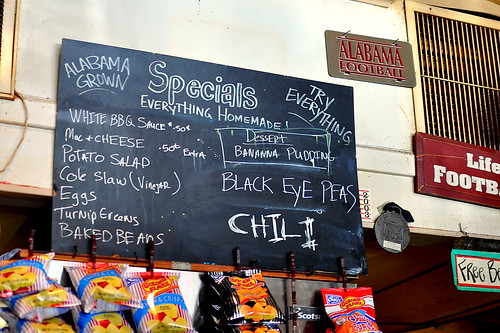 I’ve only visited a handful of the barbecue shacks in town [See: Jim ‘N Nick’s, Full Moon Bar-B-Que, and Miss Myra’s Pit Bar-B-Q], but Saw’s gets my vote for the best ambiance. I love eating in tightly packed quarters crammed with Crimson memorabilia and piggy paraphernalia. 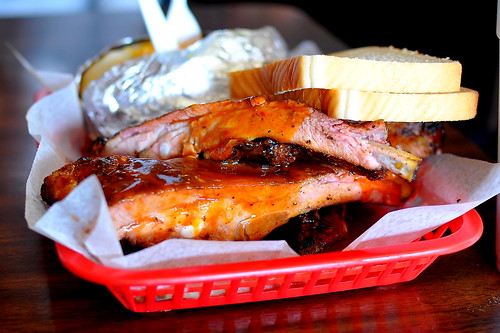 The Astronomer and I shared two “plates” this afternoon, both of which came with a meat of our choice and either two sides or one “baker.” For our first plate, we went with classic pork ribs ($10.95). The four ribs were a handful and a mouthful. It took some effort to extract every last meaty morsel from the bones, but the flavor of the pork was terrific. After I got down and dirty with the ribs, the soft slices of white bread soaked the sauce off my fingers nicely. 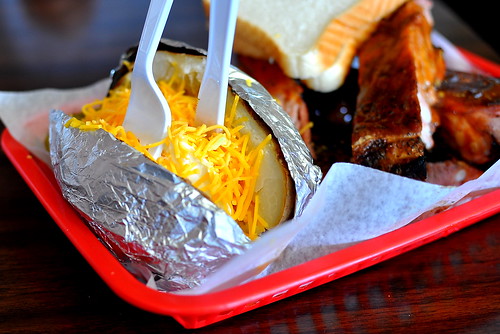 Served with the ribs was a “baker,” a baked potato slathered with butter, sour cream, and cheddar cheese. It didn’t look very enticing, but damn, it was the best baked potato I’d ever encountered. The spud was downright silky and richly dressed. 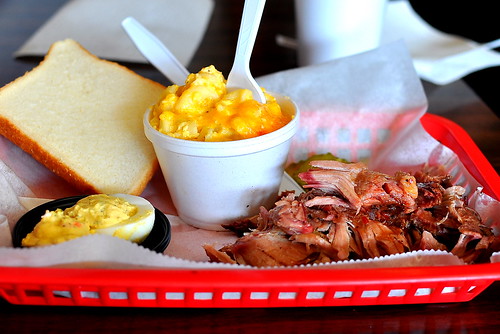 For our second plate, we chose pulled pork with macaroni and cheese and deviled eggs ($9.75). The pulled pork was served nearly dry, so we doused it in Saw Sauce as we saw fit. I like my meat on the wet side, so I went to town on the shredded pile of pig. The macaroni and cheese was of the mushy Southern variety, which is what I’ve come to expect and appreciate when dining in these here parts.  The deviled eggs were standard and satisfactory as well. 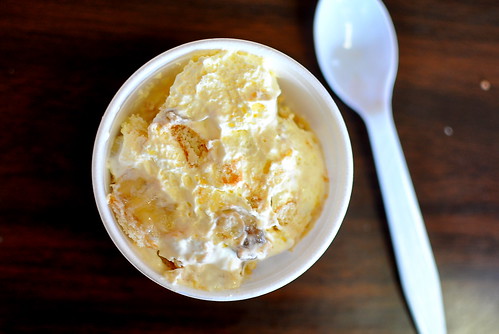 For dessert, our party of six shared a light banana pudding made with an abundance of ripe bananas and Nilla Wafers. 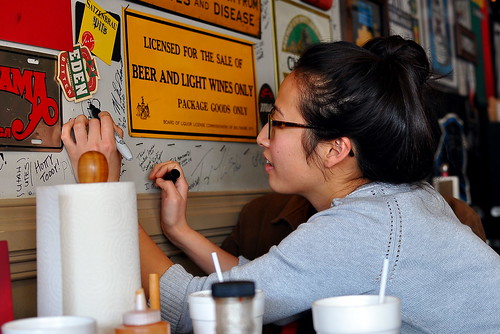 Before leaving the restaurant, we were asked to make our mark on its walls. While Sara drew a broken heart, I decided to take the opposite approach. I’m such a sap.