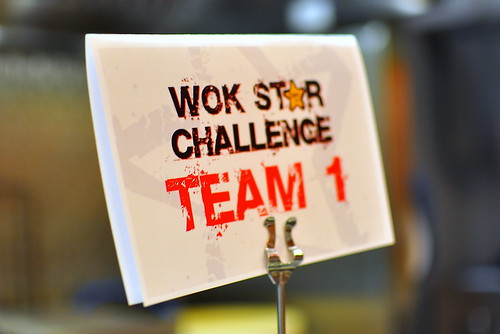 Not last night but the night before, I attended the first-ever Wok Star Challenge at Panda Express headquarters in Rosemead. In celebration of the upcoming Lunar New Year, a small group of bloggers was invited to the company’s test kitchen to meet and greet Executive Chef Andy Kao (a.k.a The Creator of Orange Chicken) and compete in a high-intensity cooking contest for charity. 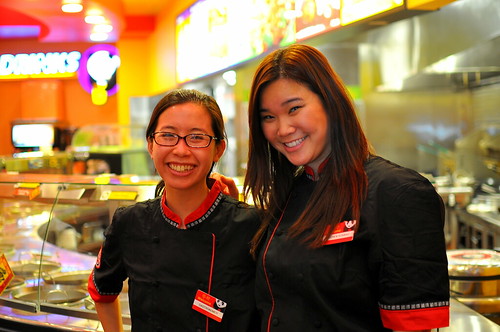 Joining me at this totally random, but seriously fun event was Quyen of Kitchen Runway, Hong and Kim of Ravenous Couple, Vernon of Stellar Recipes (a.k.a. The Astronomer), Patti of Worth the Whisk, H.C. of L.A. and O.C. Foodventures, and Jenna of Eater LA.  We were randomly paired into teams of two soon after we arrived.

The good food gods must have been smiling down on me because I was paired with Eat My Blog baker and all-around fabulous cook Quyen—I couldn’t have asked for a better teammate! 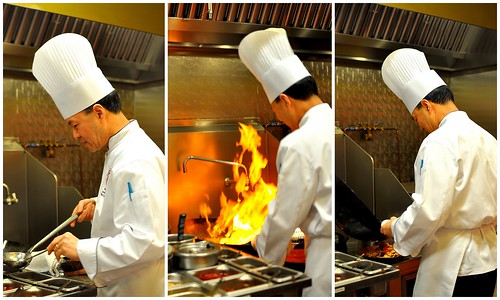 Prior to wokking and rolling our hearts out, we received a lesson on basic knife cutting techniques from Chef Kao. Next, he whipped up a batch of Firecracker Chicken Breast to show us how to manhandle a wok. 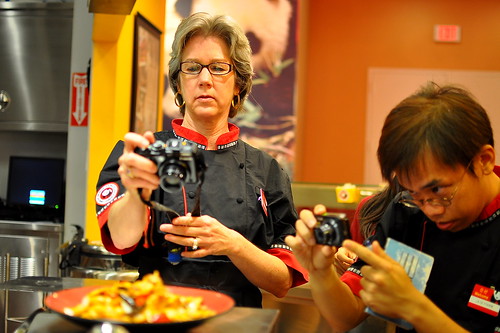 Of course, the dish had to be photographed from every glorious angle before we could dig in. We are the food paparazzi after all… 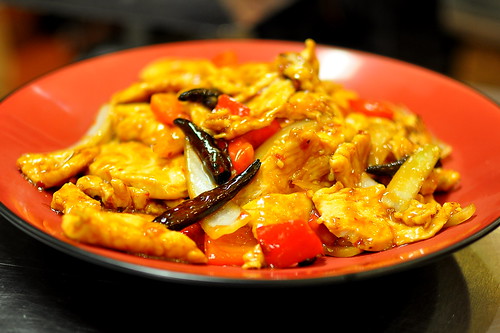 Firecracker Chicken Breast, which is comprised of marinated chicken, chilies, red and yellow bell peppers, and onions coated in a mildly spicy sauce, is available from now until March 1 in recognition of the New Year. For a free single-sized portion of the dish, print out this coupon and redeem it at any Panda Express on February 3. 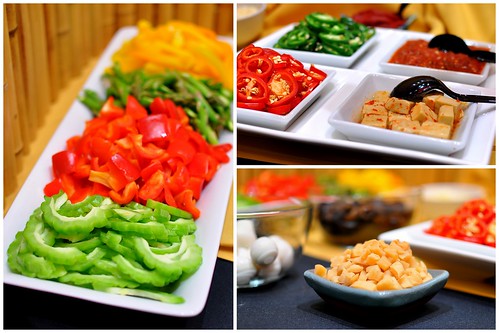 After imparting his knowledge upon us, Chef Andy gave us 20 minutes to choose our ingredients and to prepare a dish that was not only tasty, but prettily plated and New Year-themed as well. The selection of ingredients on hand was vast and vibrant. I initially wanted to incorporate the fermented tofu and bitter melon, but ultimately took a different route. 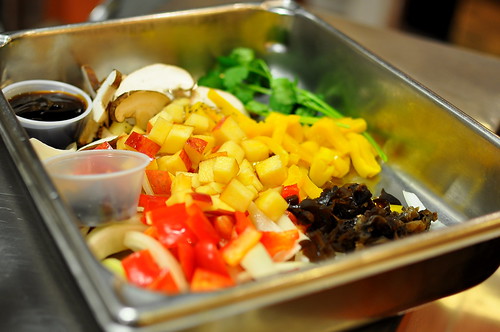 We felt that these ingredients would meld together harmoniously, creating a flavor profile that was both familiar and interesting. All of the teams were given marinated chicken breast for protein. 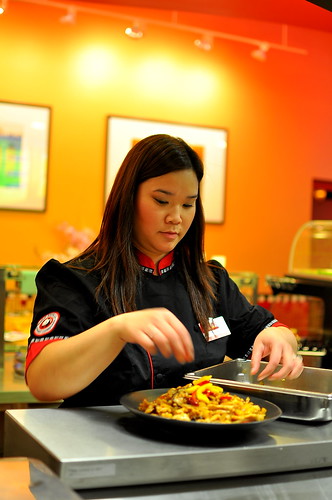 Quyen and I were way too busy cooking to take photos of the process, but here’s a shot of my teammate garnishing our finished plate of Spicy Jackfruit Chicken! 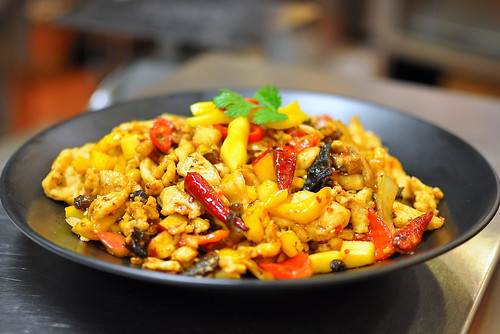 Isn’t she a beauty? With three varieties of chilies at play, along with fresh apples and jackfruit, the dish was fiery and sweet (just like us). 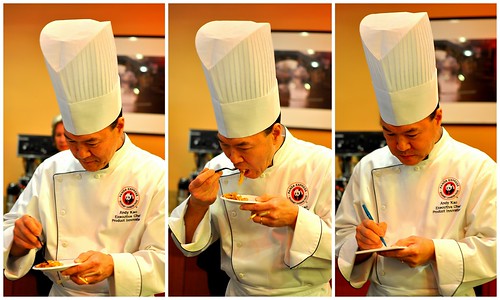 After the 20 minutes were up, each team presented their dishes to Chef Kao. He tasted each one and offered comments and critiques. We tried to get a sense of whether or not he liked our creations, but his poker face didn’t give anything away. 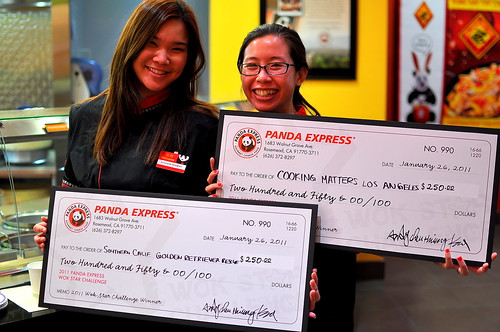 When all was tasted and scored, Chef Kao proclaimed Quyen and me the ultimate Wok Stars! Woo hoo! We were each presented with giant checks for $250 made out to our charity of choice. I donated my winnings to Cooking Matters Los Angeles, while Quyen gave hers to Southern California Golden Retriever Rescue. 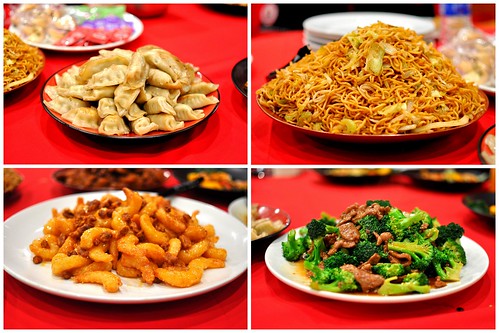 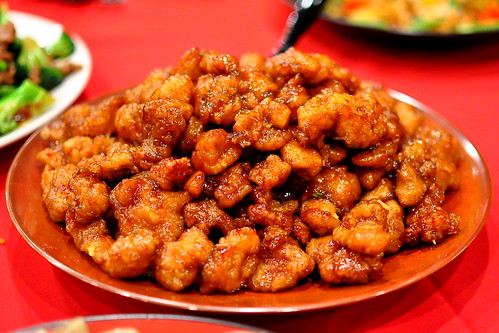 …orange chicken! I love Chinese-American food with all of my heart. 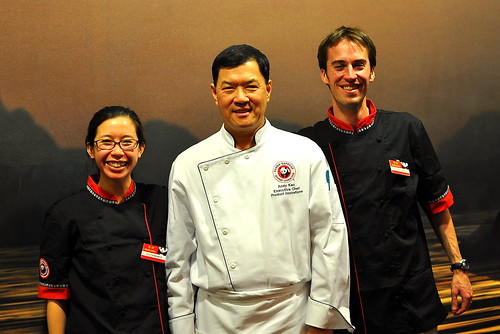 Before departing into the night, The Astronomer and I made a Chef Kao sandwich. Eating in airports and food courts would be a lot sadder if it weren’t for this man. Orange chicken 4-eva.