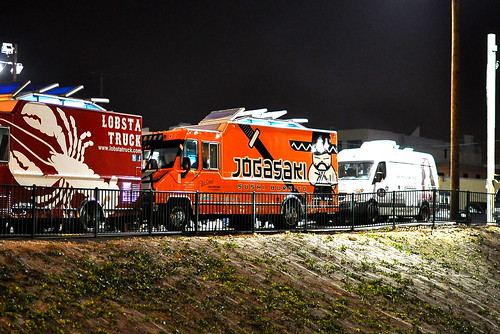 After feasting on fried chicken at the Ludo Truck and swinging by the Manila Machine for a beef tapa slider and ube cupcake, The Astronomer and I stalked down the Jogasaki Sushi Burrito truck for our final bite of the night. Launched in late January, Jogasaki specializes in jumbo sushi rolls, stuffed with a hodgepodge of fixings and wrapped tightly in either a flour tortilla or soy paper.

Far from subtle or refined, Jogasaki’s sushi burrito lies somewhere on the sushi spectrum between Trader Joe’s prefabbed rolls and Mori’s pristine nigiri. We’re not dealing with the finest fishes on the block, but it’s passable, affordable, and hits the spot. 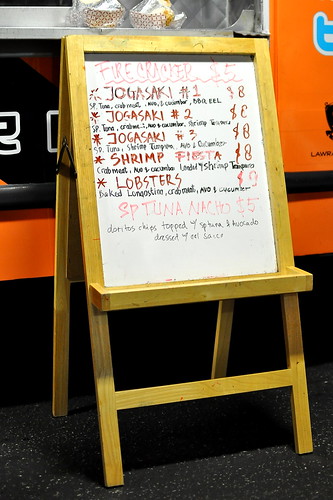 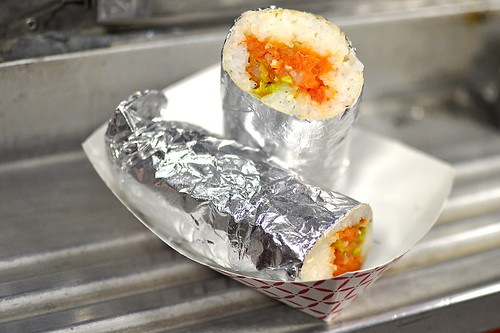 I settled on the #3, which included spicy tuna, shrimp tempura, avocado, and cucumber ($8). I’m glad that I asked for the eel sauce on the side, because its sticky sweetness would’ve wrecked my burrito. 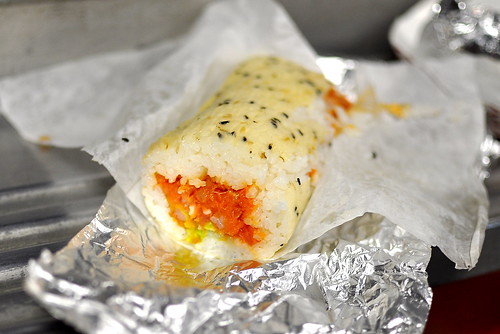 My sushi burrito arrived wrapped up in three different layers—aluminum foil, paper, and a thin sheet of soy paper studded with black sesame seeds. After peeling away the first two layers, I went in for bite. The rice was room temperature and mostly moist, while the tuna was plentiful, but not the least bit spicy. The shrimp tempura was a nice addition, even though it was kind of limp. At $8 a pop, the sushi burrito met my expectations and satisfied my craving. I wouldn’t hesitate to order another.