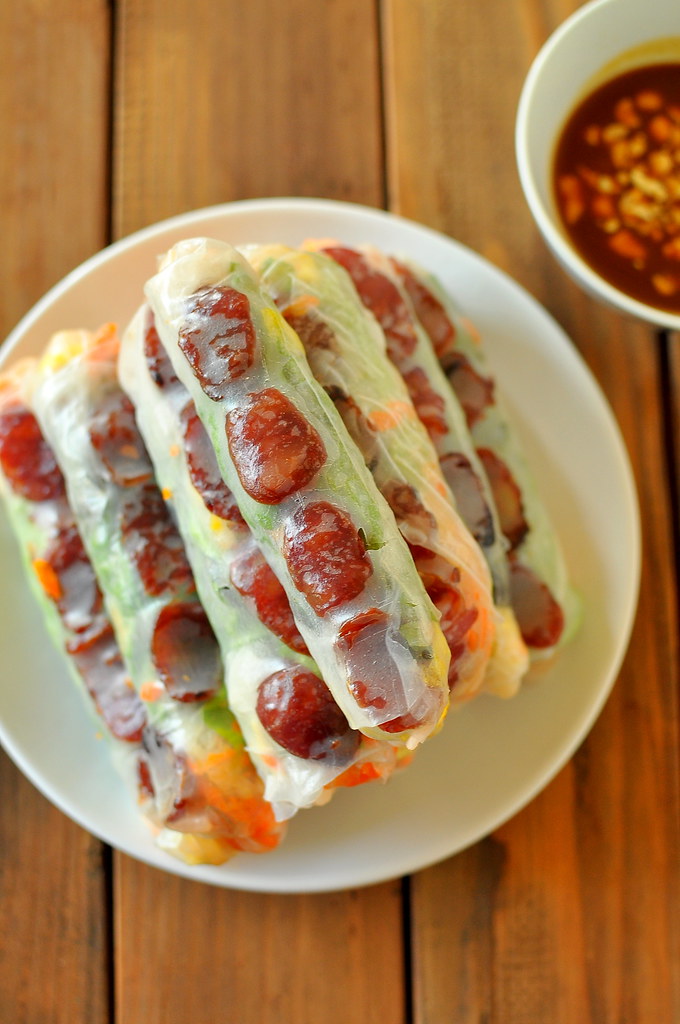 The second part of The Astronomer’s anniversary present came nearly two weeks after the first. I had originally planned to deliver both rice paper wrapped-delights simultaneously, but it turned out to be too much food and effort for only two mouths. Also, we had a ridiculous amount of leftovers from our ten-course banquet bonanza, so it was just as well that I held off on making bò bía for a little while.

Whereas The Astronomer loves gỏi cuốn most, I’ve always been partial to these lesser-known rolls filled with jicama, carrots, thin egg ribbons, Chinese sausages, and dried shrimp. The dipping sauce is identical in both situations, but the flavor profiles are completely different. While gỏi cuốn is mostly subdued save for the bites with fresh mint and garlic chives, bò bía brings bold flavors and interesting textures from start to finish.

This recipe comes from my aunt Tina, my family’s designated bò bía specialist. I grew up eating her rolls at family gatherings and have been meaning to learn how to make them for years. It’s true that bò bía contains a lot of different ingredients, but the only time-consuming and tedious step is julienning the jicama and grating the carrots. A finely sharpened mandoline slicer is extremely helpful, as well as a diligent sous chef. Once I got over this initial hurdle, the rolls came together simply, easily, and damn tastily. For the slaw, combine the carrots, jicama, and salt in a large pot. Cook over medium heat until the jicama and carrots have softened, but still retain a bit of crunchiness, approximately 15 minutes.  Set aside. For the egg ribbons, beat the eggs in a large bowl using a fork or whisk until they are mostly uniform in color.

Using a large, non-stick skillet over medium heat, pour in 1/3 of the egg mixture and give it a good swirl so that it spreads out thinly across the entire pan. Once the bottom side has set, run a spatula underneath the omelet and flip it to cook the other side. Repeat this step two more times for the remaining eggs. Set the finished omelets aside to cool. [Note: a thin coating of non-stick cooking spray is a good idea if your pan is weathered.] Once the omelets have cooled, roll them up and slice thinly. Set the ribbons of egg aside. For the Chinese sausages, thinly slice each link at a bias. Transfer the sausages into a frying pan and render the fat over medium heat, approximately 7 minutes. Set aside. Pour out all of the fat left in the pan save for 1 tablespoon. For the dried shrimp, add the shrimp and garlic into the oiled pan. Saute over medium heat until the garlic is golden and the shrimp are crisp, approximately 8 minutes. Once all of the ingredients have been properly prepped, it’s time to roll. Quickly wet a piece of rice paper under running water, making sure to moisten both sides. Lay it down on a cutting board. Place a lettuce leaf at the lower end of the rice paper. Add a bit of the slaw, egg, and shrimp evenly across the rice paper.

Roll the rice paper over the filling and tuck it underneath.  Add four sausages across the rice paper (see the photos of the shrimp placement in my gỏi cuốn recipe for an example). Fold the sides inward and continue rolling as tight as possible without tearing the rice paper. Repeat until all of the ingredients have been used. Serve as soon as possible along with a hoisin dipping sauce topped with crushed peanuts. See here for the recipe—water can be substituted for the pork/shrimp broth.