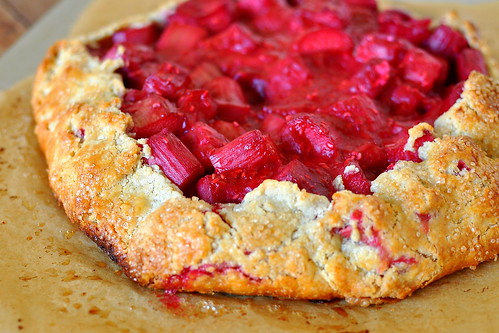 As I was shopping for produce at my local branch of Super King, I spied a stack of ruby rhubarb stalks out of the corner of my eye. On impulse, I grabbed a bag and quickly filled it with a half dozen stems. I had no clue at the moment what would become of this seasonal booty, but I was excited about the possibility of a pie, a crumble, or maybe even jam.

Additionally, I was stoked about working with rhubarb from prep to plate. I have consumed plenty of the stuff over the years, but never cooked with it in my kitchen. I find that working with a raw ingredient yields invaluable insights that mere eating cannot provide. Like, I had no idea that unadulterated rhubarb tasted so wonderfully snappy and tart! It sort of reminded me of a fruitier upright elephant ear.

After coming home from the grocery store and going through my cookbooks, food magazines, and various web resources, I settled on this rhubarb and raspberry crostata recipe from Karen Demasco of Locanda Verde in New York City. It appeared in last month’s Bon Appétit and received rave reviews from those who had made it—three-and-a-half  “forks” to be exact.

Both the dough and the filling came together smoothly and easily, and the finished crostata brought a great balance of flavors. The crust was a buttery, nutty, and tender blend, while the filling didn’t drown the fruit in unnecessary sugar. The Astronomer and I both appreciated how the natural flavors of the raspberries and rhubarb shone through.

I love it when unplanned market purchases turn out so nicely. 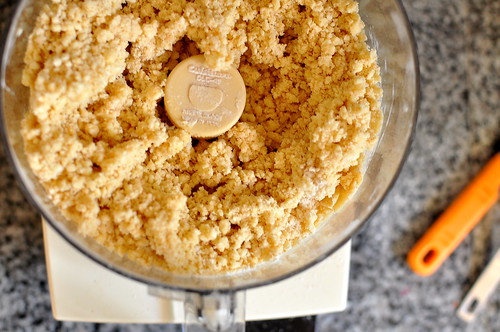 Combine both flours, sugar, and salt in a processor; blend for 5 seconds. Add butter; pulse until butter is reduced to pea-size pieces. Whisk egg and milk in a small bowl to blend; add to processor and pulse until moist clumps form. 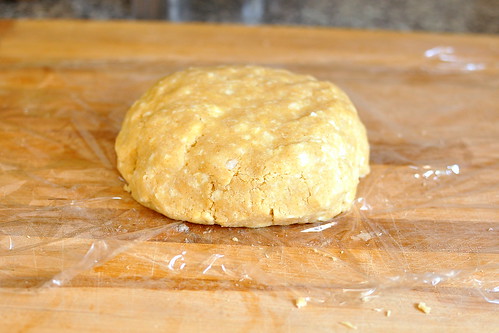 Gather dough into a ball; flatten into a disk. Wrap in plastic wrap; chill at least 1 1/2 hours. The crust can be made 2 days ahead. Keep chilled. 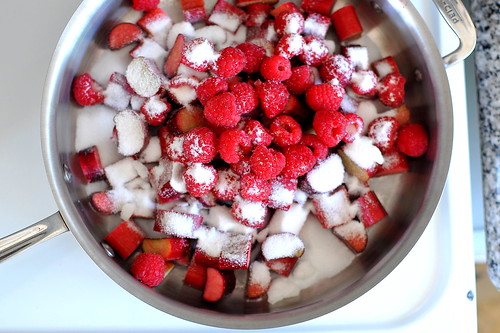 Dissolve cornstarch in 3 tablespoons water in a small bowl; set aside. Combine rhubarb, raspberries, and sugar in a large heavy saucepan. Cook over medium heat, stirring often, until sugar dissolves and juices are released, about 4 minutes. 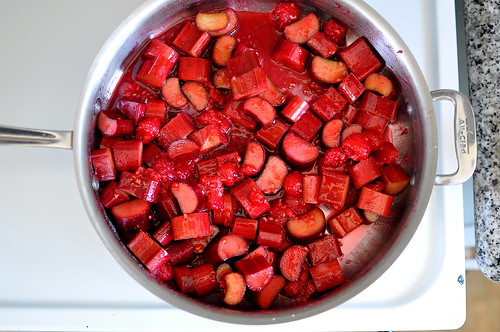 Stir in cornstarch mixture and bring to a boil (rhubarb will not be tender and slices will still be intact). Transfer to a bowl. Chill until cool, about 30 minutes. 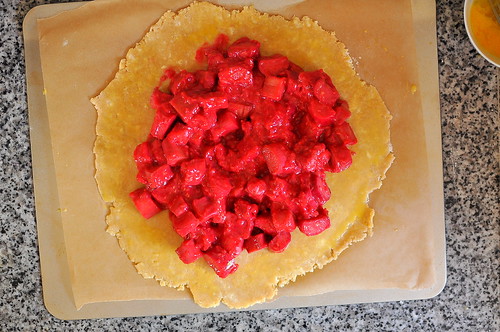 Preheat oven to 400°F Roll out dough on floured parchment paper to 12″ round; brush with beaten egg. Mound filling in center of crust; gently spread out, leaving 1 1/2″ border. 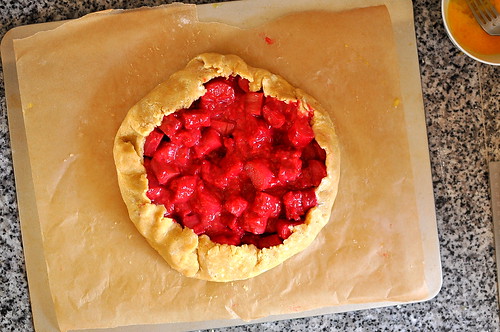 Gently fold edges of dough over filling, pleating as needed. Brush border with egg; sprinkle with raw sugar. Slide parchment with crostata onto a large rimmed baking sheet and bake until crust is golden brown and filling is bubbly, about 45 minutes. Let crostata cool on baking sheet on a rack. Transfer crostata to a platter, cut into wedges, and serve with whipped cream or ice cream. 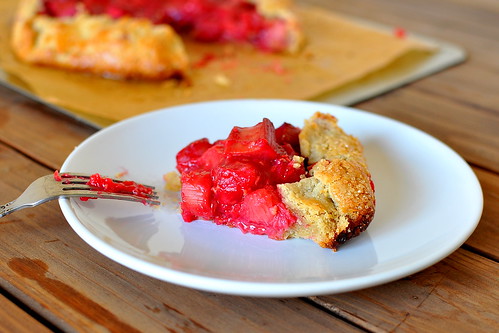 8 thoughts on “Rhubarb and Raspberry Crostata”