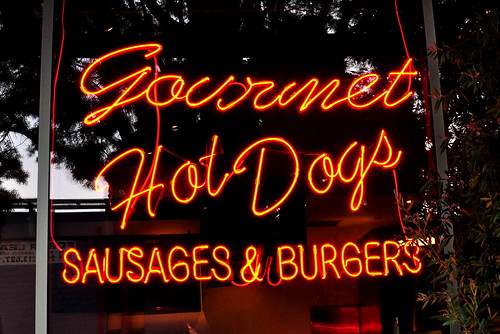 With a trio of gourmet wiener shops opening within the span of a year, Pasadena has become a hotbed for hotdogs. The first restaurant to come on the scene was The Slaw Dogs on North Lake. While the toppings here were fun, I haven’t been back since my initial visit due to a yet-to-be-remedied bun situation. The next spot to open was Big City Hot Dogs in Old Town Pasadena, which was then followed by Dog Haus across the way from Pasadena City College.

While I haven’t heard much buzz about the former, the latter has been receiving rave reviews since it opened. Along with my friend and fellow Pasadenian Laurie, I visited Dog Haus for a weeknight dinner. We were both in the mood for something awesomely gut busting. 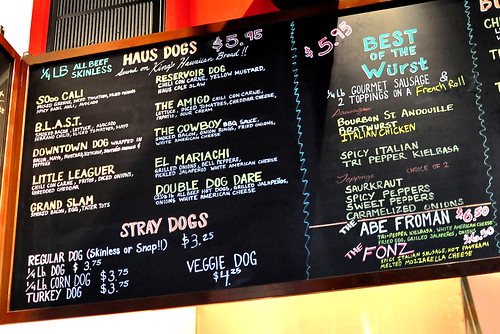 In addition to their signature hotdogs, Dog Haus also serves sausages, burgers, and a handful of sides. Both Laurie and I stuck to the hotdog offerings this evening. I was hoping for a side of onion rings as well, but retracted my order after learning that they weren’t made in-house.

All of Dog Haus’ dogs weigh in at a hefty quarter pound and can be had with or without casing. Alternative diets are satisfied with veggie and turkey varieties. 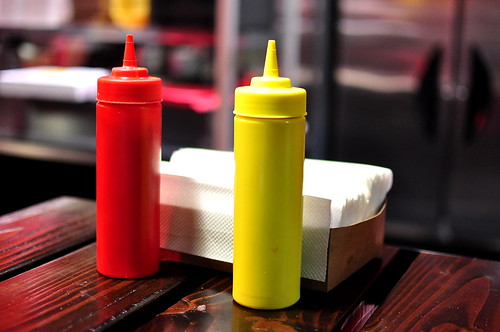 Every table is outfitted with a big ‘ol box of napkins and squeeze bottles filled with yellow mustard and ketchup. For those interested in zestier toppings, there’s an extensive condiment bar toward the front of the restaurant with several types of mustard, curry ketchup, hot sauce, relish, peppercinis, and more. 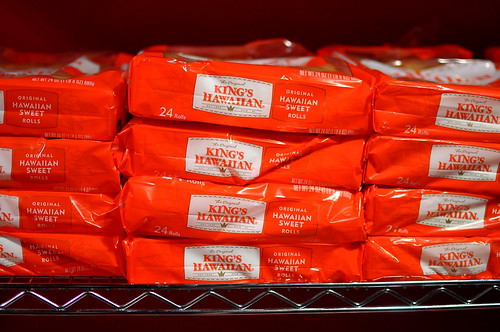 The buns at Dog Haus are outsourced to King’s Hawaiian, which was a seriously brilliant move. These eternally sweet and soft rolls were made to be toasted up and paired with something meaty and savory. 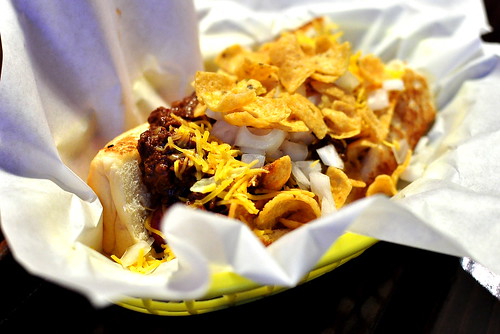 And speaking of meaty and savory, Laurie’s Little Leaguer ($5.95) was a beast. Atop the skinless quarter pounder was a dousing of chili con carne, Fritos, diced onions, and shredded cheddar. I love a grease bomb as much as the next gal, but damn, this creation had me reeling.

Laurie, a far braver woman than I am, was quite pleased with her selection. The one bite I stole sat surprisingly well. Fritos and hotdogs go hand in hand. 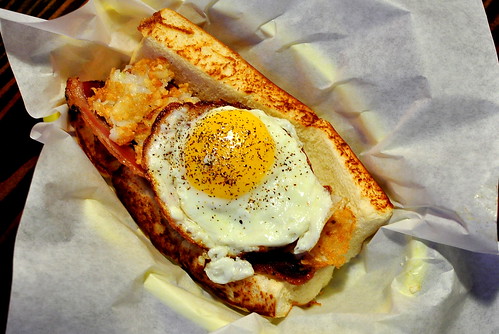 My Grand Slam ($5.95) had a thick slice of smoked bacon running along one side and a fried egg and smashed tater tots on top. Before diving in, I pierced the yolk to smother everything in runny richness.

I liked everything about my dog. The wiener itself was thick and satisfying, while the toasted Hawaiian bread imparted a touch of sweetness and held everything together neatly. The toppings were all well prepared—the egg perfectly sunny, the taters nice and golden, and the bacon just crisp enough. My dog was so good that I kept thinking about it long after it was gone.

Dog Haus really is the “Best of the Wurst.”