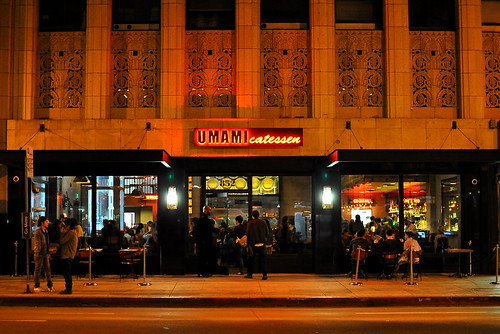 I’m not the kind of gal that usually frequents a restaurant during its soft opening, but when I heard that there’d be fried-to-order doughnuts at UMAMIcatessen, I had to make an exception. Doughnuts are my rapture.

UMAMIcatessen is located on a stretch of Broadway that’s lined with fluorescent-lit stores selling jewelry and poofy quinceanera dresses. Some might find this part of town a bit iffy, but I’ve been stuck in the suburbs for so long that I couldn’t get enough of its grit. 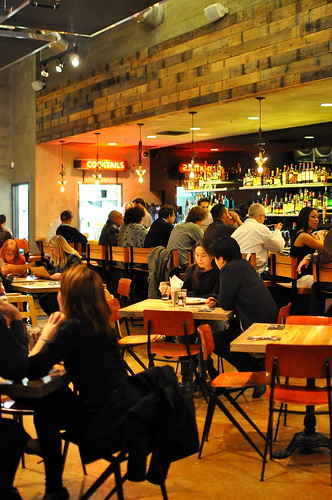 I came in for an early dinner last Thursday night along with my friends Nastassia and Darin. The space was humming but not busy, so we were seated promptly at a table fit for four. By the time we left a few hours later, the entire room was packed with a line outside the door. News of fried-to-order doughnuts spreads quickly, I guess. 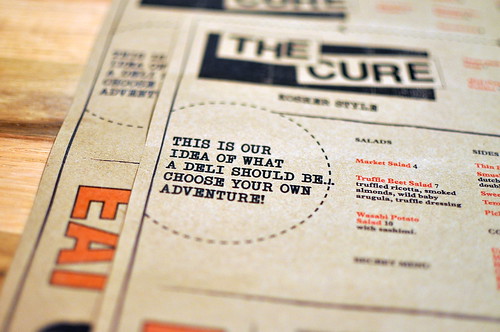 UMAMIcatessen, a genius creation of restauranteur Adam Fleischman (Umami Burger, Red Medicine, 800 Degrees), is widely referred to as a  “food emporium.” Really though, its just a regular restaurant with a more-varied-than-most menu. 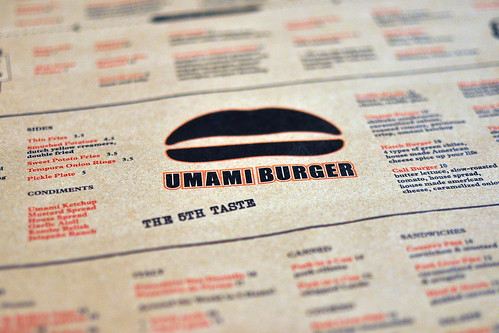 The soul of UMAMIcatessen is Umami Burger, a winning burger concept with six (and counting) locations in Los Angeles and one in San Francisco. 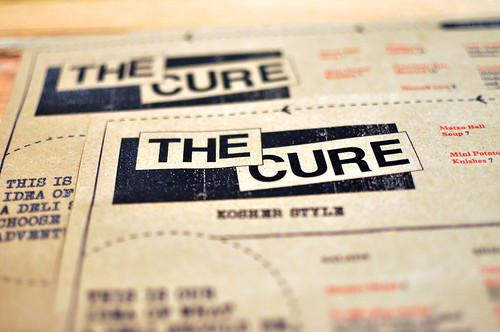 Also on the bill of fare are traditional deli dishes under the heading “The Cure.” The consulting chef is sadly not Robert Smith, but Micah Wexler of Mezze. 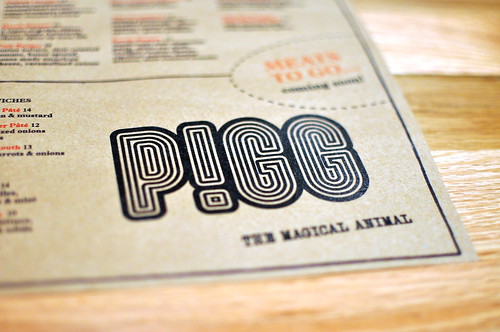 San Francisco-based chef Chris Cosentino is the chief curator of the charcuterie and offal offerings under the P!GG portion of the menu. 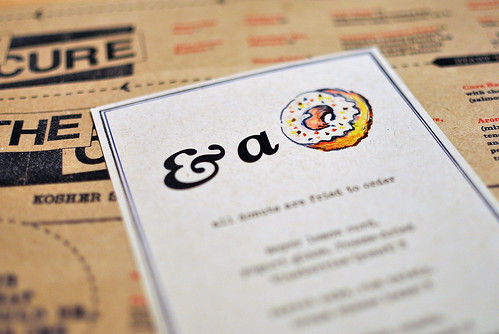 And finally and most alluringly is & a Doughnut. The pastry chef behind these deep-fried desserts is unknown. 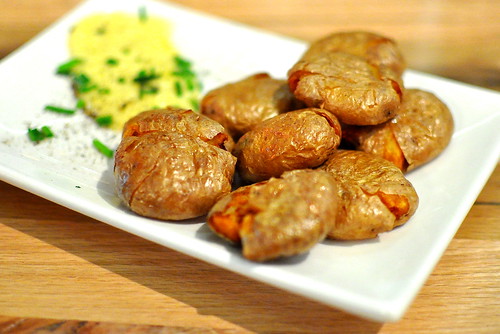 While Nastassia would’ve been perfectly content jumping right into doughnuts, I insisted that we have a proper dinner first. From the Umami Burger section of the menu, Nastassia selected the Smushed Potatoes ($4.50) to start. These double-fried Dutch Yellow Creamers served with a chive-flecked garlic aioli were totally adorable and so very delicious. 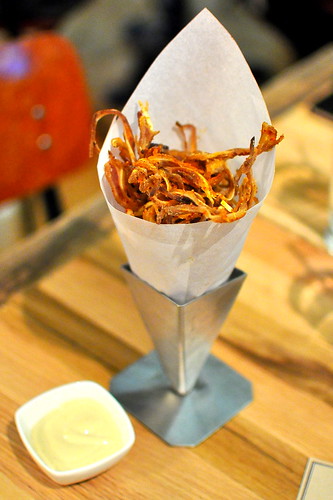 From the P!GG portion of the menu, I chose the Crispy Pig Ears ($7), which were thinly sliced, battered, fried, and seasoned with chili flakes and salt. They arrived in a tangled heap of crunch and spice. On the side was a novel yet familiar tasting sauce made of parsley, lemon, and pig’s brain called “brainaise.” 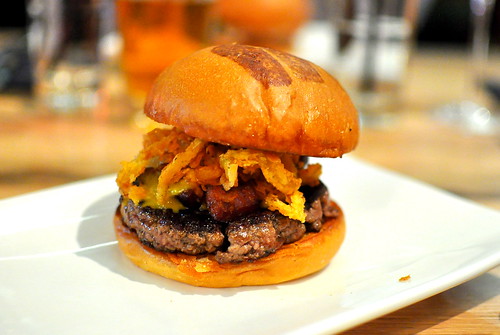 For our mains, all three of us opted for burgers. Nastassia’s Manly Burger ($11) lived up to its name with beer-cheddar cheese, smoked-salt onion strings, and bacon lardons. She shared a generous hunk with me and I was really impressed. The combination of flavors was plain addictive, and the execution was spot on. 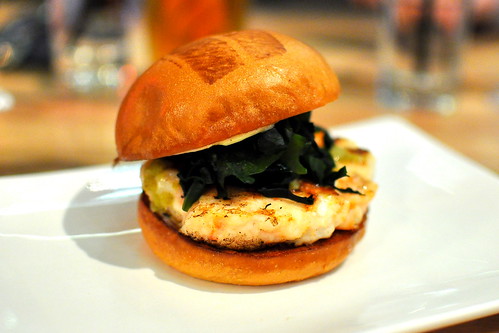 Darin and I split the Shrimp Burger with Yuzu Kosho ($13), which is only available at UMAMIcatessen. The combination of wild shrimp with tingly Japanese spices was not only unique, but damn tasty too. 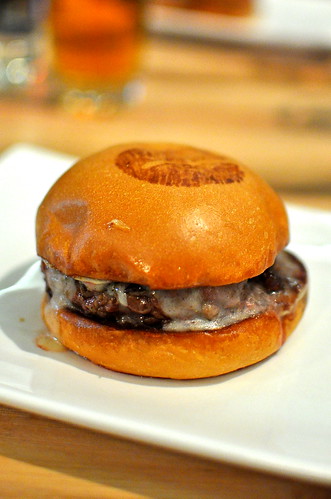 To supplement our shrimp burger, Darin and I also shared a Truffle Burger ($10). From the raring rare beef to the house-made truffle cheese to the ever-so-soft bun, I loved everything about this darling burger. After tasting three of Umami’s creations, I am totally smitten with the brand. What took me so long to eat here, again? 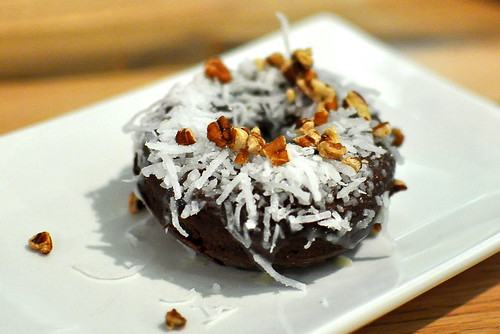 For dessert, we shared four sweet thangs from & a Doughnut. The first one we dug into was the German chocolate, which was topped with shredded coconut and crushed pecans and glazed in condensed milk ($3).

Nastassia thought the cake doughnut tasted more oily than chocolaty, while I found it good but not particularly special. Needless to say, our minds were not blown. Shucks. 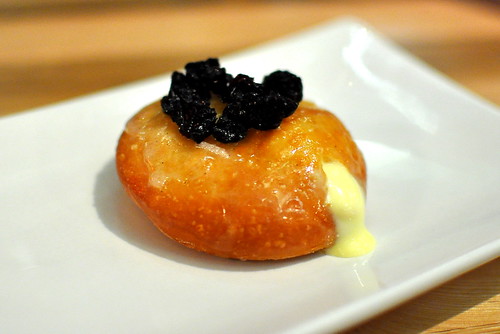 The next doughnut up to bat was filled with a runny Meyer lemon cream and garnished with freeze-dried blueberries ($3). The entire thing was covered in a yogurt glaze that our Knorks had difficulty surmounting. For a yeast-risen doughnut, this one was disappointingly dense and not the least bit pillowy. Strike two. 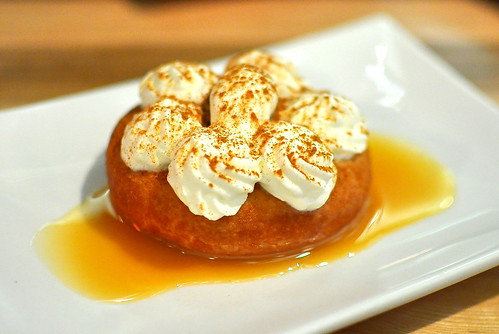 Our final two doughnuts were a step above the initial ones. With the help of a caramelized and milky sauce, the tres leches ($4) cake doughnut had a tender and delightful quality to it. 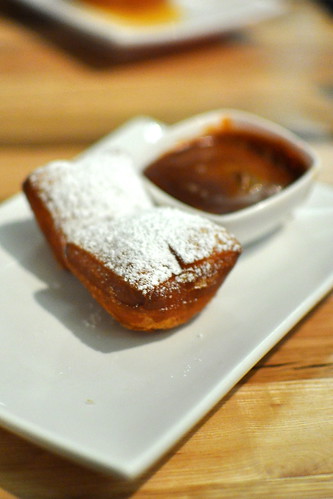 The run-of-the-mill biegnets ($4) were greatly enhanced by the thick, coffee-laced sauce served alongside.

Nastassia and I were hoping to devour the doughnuts of our dreams at UMAMIcatessen, but alas, these doughnuts fell short, failing to deliver the deep-fried high we were after. 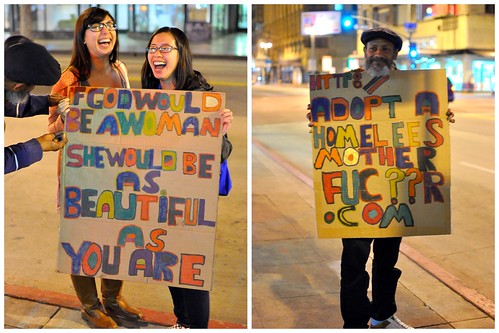 Even though & a Doughnut failed to meet my expectations, I still considered my meal at UMAMIcatessen a great success. The pigs ears and spuds were tops, while the burgers converted me into an Umami believer. Plus, we met a “homelees mother fucker” looking to be adopted just outside the restaurant. It was a really good night.