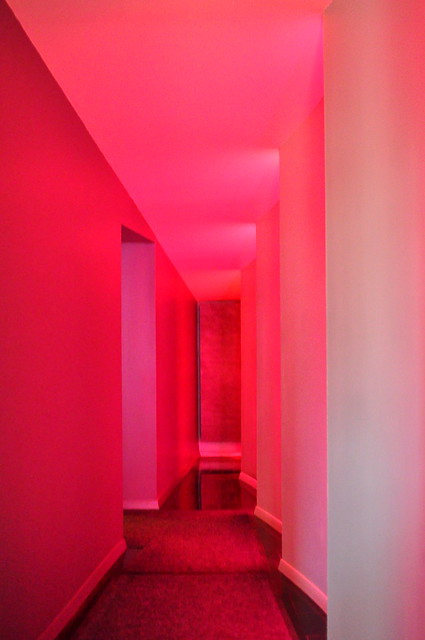 I must admit that a part of me was relieved when I failed to get a reservation at Alinea initially. Not only would my bank account be more robust for it, but the awesome memories that I had of the restaurant from my first meal there would remain intact.

Less than 24 hours before boarding our flight to Chicago, I received a phone call from Alinea’s reservationist offering a table for two the following evening. It’s not every day that the opportunity to dine at one of the world’s best restaurants presents itself, so I took a deep breath and went for gold. 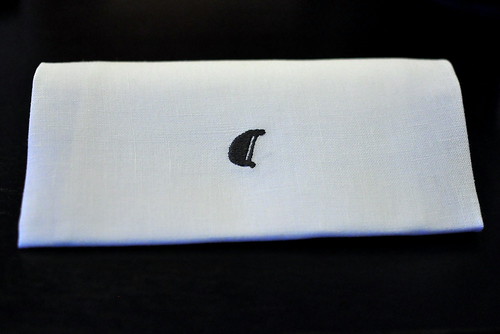 Just as soon as we arrived in the city, The Astronomer and I jammed it to our hotel, changed into prettier clothes, and headed off to Alinea. Upon walking through the restaurant’s fuschia-lit entrance, we were greeted by the hostess, who freed us from our winter coats and led us upstairs to our table.

Before I go on any further about the food and fun we had this evening, it must be said that the service at Alinea isn’t the warmest. Not every front-of-the-house team can strike the perfect balance between polished and inviting a la Eleven Madison Park, but Alinea’s all-male waitstaff left a lot to be desired. As these black suited gents presented each course, it felt like they had grown tired of and jaded by the theatrics Alinea is known for. As a result, our interactions were often awkward and sometimes humorless. Now that I’ve gotten that off my chest, on to the food and fun… 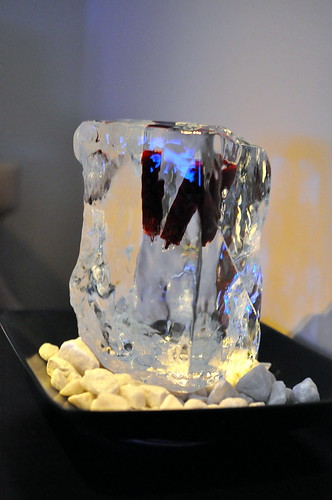 Even though the service left me wanting, the food mostly dazzled. This intriguing ice block was the first of three centerpieces to grace the table. I knew from previous experience that it would play a role in a future course, but in what capacity remained to be seen. I was hoping for an ice luge of some sort 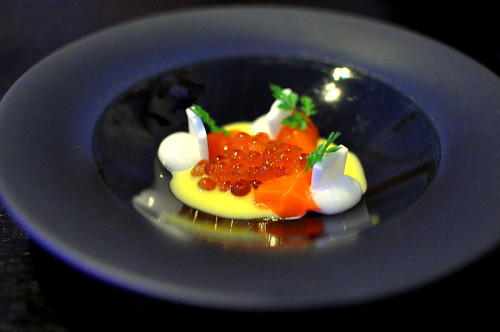 “This is as normal as it gets,” exclaimed our waiter as he delivered the first course. The roe paired marvelously with the creamy curry, jellied carrots, and coconut orbs. The best bites were the ones with slices of meaty coconut flesh. 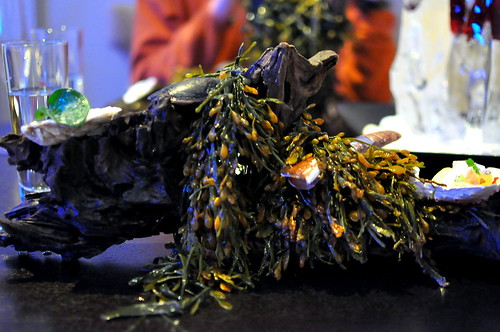 Courses two through five were perched on a piece of driftwood, tucked between sopping strands of seaweed. The presentation was absolutely ridiculous; it looked like something out of a science fiction flick. I wasn’t sure whether to roll my eyes or squeal in delight. 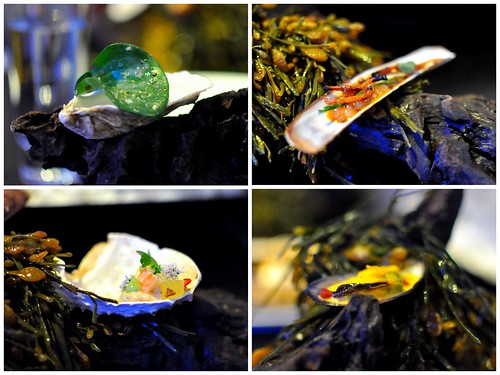 We were served (clockwise from top left) an oyster leaf from Scotland coated in a traditional mignonette; razor clams with shiso, soy, and daikon; a single mussel with saffron, chorizo, and oregano; and King crab with passion fruit, heart of palm, and allspice.

While the oyster leaf, which legitimately tasted like an oyster, was the most interesting of the four bites, The Astronomer and I agreed that the King crab with its slight spice and fruity accompaniment was the one that left us wanting more. We also loved how it was served in a crab claw. 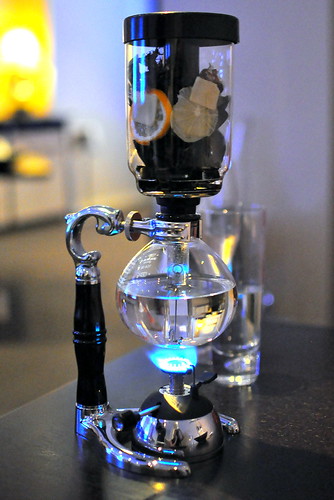 Once the massive hunk of driftwood was cleared and the table was wiped down, a waiter brought over a syphon coffee maker to keep us company. I spied some citrus slices in the top chamber, but had no clue what was brewing otherwise. 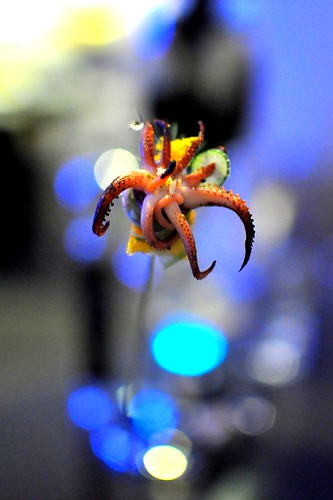 As the coffee maker bubbled and boiled away, a single bite perched atop an “antenna” arrived on the scene. This was the first of designer Martin Kastner‘s “serviceware” concepts to be featured in the meal. The mouthful of ham, fennel, squid, and orange was perfectly nice, but not as memorable as the vehicle it arrived on. Oscillation City. 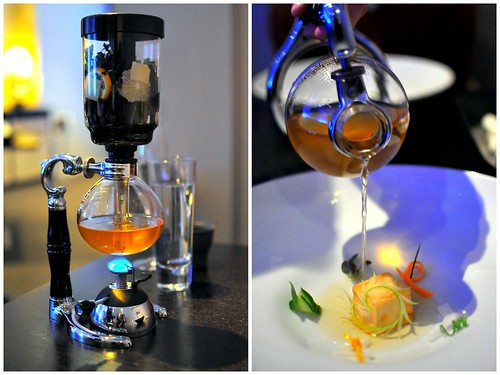 Our attention was turned back on the coffee maker for the next course. While we were plucking squid off antennae, the contraption was brewing dashi, a Japanese stock made from kombu, yuzu, and other aromatics. To serve, the dashi was poured atop a “scallop,” creating a one-of-a-kind agedashi tofu experience. 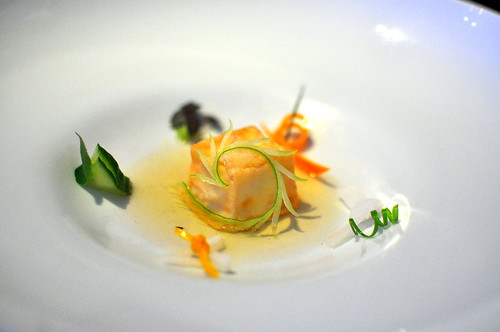 According to our waiter, when scallops are pureed with soy milk and grapeseed oil, the soy milk acts as an emulsifier binding the scallop to the grapeseed oil. The resulting product behaves and tastes just like tofu, with a bit of a briny undertone. Fried on all sides and swimming in a dashi bath, it had an uncanny resemblance to agedashi tofu.

I find that the most successful molecular gastronomy dishes are the ones that are simultaneously thought provoking, fun, and delicious. This one shined on all three fronts. 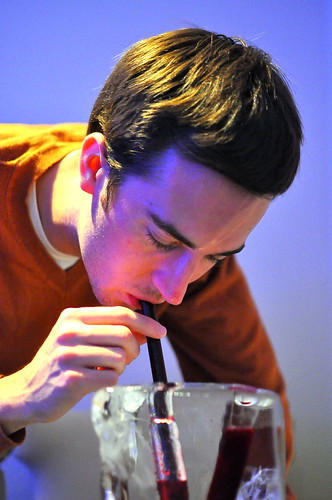 Remember the block of ice chillin’ on the table? For this next course we were given two plastic straws and instructed to go at it. It was no surprise that the beet juice was cool and refreshing considering that it had been sitting on ice for over an hour. 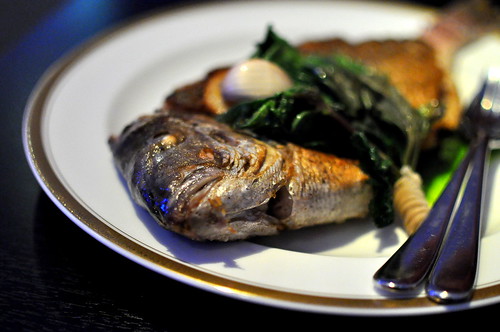 Next Restaurant, Chef Grant Achatz‘s followup to Alinea, will be exploring Sicily circa 1940 after El Bulli wraps up. This perfectly cooked scup was a sneak preview of what’s to come. According to our waiter, Chef was inspired by this time period and region after meeting an Italian food historian. 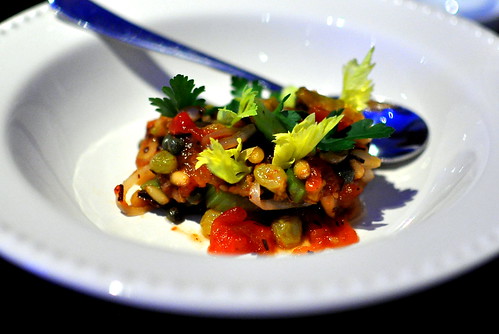 Served alongside the fish were fried chickpea chips, mint pesto, and caponata, a homey Sicilian dish made of eggplant, celery, tomatoes, and capers seasoned with sweetened vinegar.  A bit of cocoa powder rounded out the dish’s tangy notes.

While The Astronomer and I absolutely adored the crispy-skinned fish and its side dishes, we were taken aback by how normal it was. Where were the bells, whistles, and Alinea-esque touches? It’s funny how straightforward food can be so very jarring when one is expecting something completely opposite. 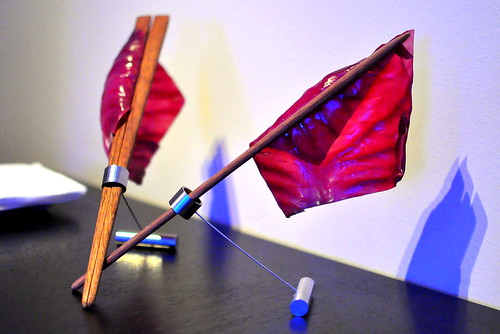 After we polished off the fish, another centerpiece was set on the table. This one looked liked rubbery flags hanging from chopsticks. 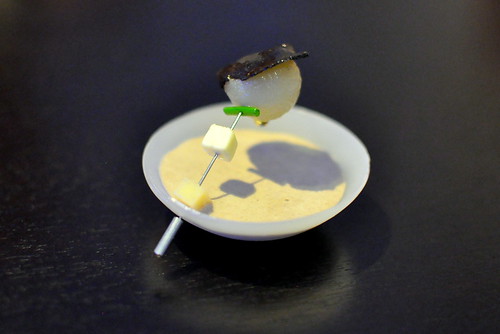 “Hot Potato, Cold Potato” has been wowing diners since the restaurant first opened. The combination of cold potato soup taken with a warm potato sphere was just as delightful this time around as the first. Fortunately, no fancy sports coats and eyeglass frames were harmed this time around (wink wink, Bro). 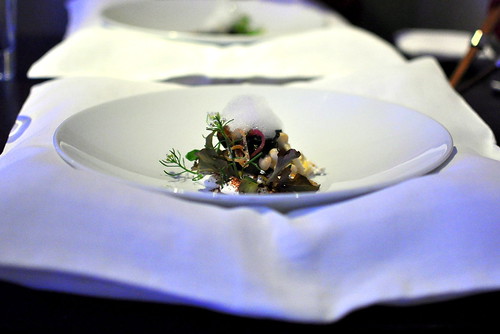 One of the most memorable courses from my first meal at Alinea featured a pillow that emitted lavender scented air. After retelling the story countless times to The Astronomer, it was great to finally experience the magical pillow together. 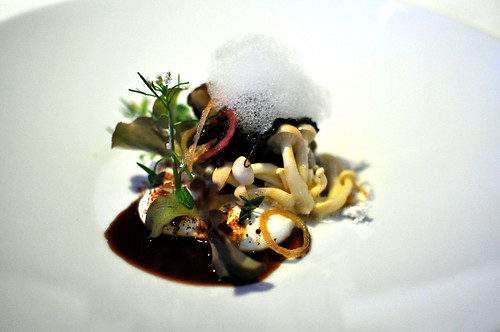 As we plucked the wild mushrooms from the plate—a collection of beechwood, hen of the woods, and black trumpet—pine scented air emanated from the pillow beneath. Taken together, the flavors and smells mimicked the act of foraging for mushrooms. I enjoyed the pillow course even more the second time around. 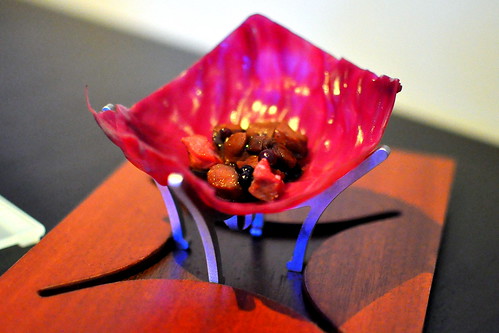 Remember the centerpiece that looked like flags hanging from chopsticks? The pickled cabbage “flags” served as a tortilla of sorts for these venison “tacos.” 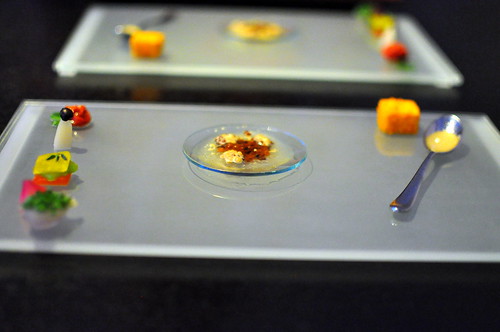 To garnish the “taco” was a mustard vinaigrette, a dehydrated tomato, a bell pepper trio, a pickled onion, a clove of sweet garlic, a paprika dusted potato, and a pilsner gel. The texture and flavor of the cabbage was a miss for me, but The Astronomer was a fan so I passed my parcel on to him. 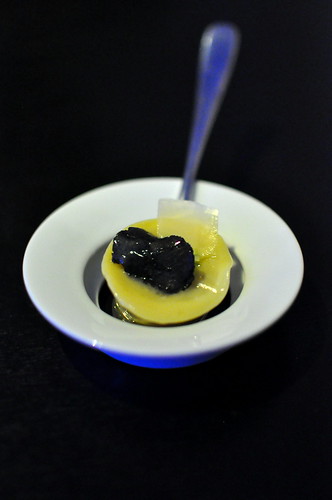 Black truffle “explosion” is another one of Alinea’s iconic dishes. The “anti plate” managed to trick The Astronomer into thinking that the single ravioli rested in broth, when in actuality it was only the table. The explosion was as explosive as billed, flooding our mouths with warm truffle broth. 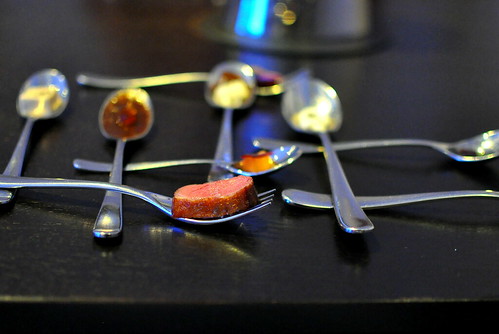 This next dish of whimsically arranged spoons and forks was inspired by a piece of artwork by Joan Miro that Chef saw while visiting Tate Modern in London. The spoons and forks, which contained squab, foie gras, prune preserve, balsamic vinegar with duck fat and thyme, pumpernickel crumbles, an olive, and a lavender noodle, could be eaten in whatever order we wished.

While the collection of flavors went together well enough, this dish was more fun to eat than it was actually delicious. It’s hard for ingredients to meld and mingle when they’re each hanging out on their own plane. 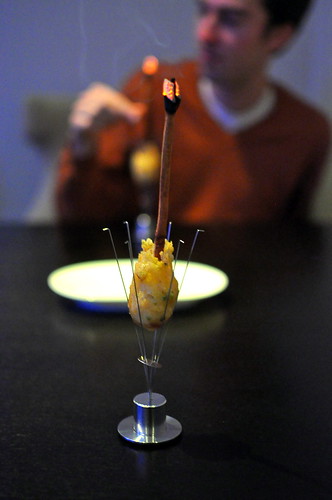 Transitioning from savories to sweets, we were served a very unorthodox cheese course. Hidden inside the tempura batter was a combination of pears, caramelized onions, and Brie cheese. The entire package adhered to a cinnamon stick that was lit on one end. The Astronomer, a cinnamon fiend through and through, was hopping that the warm spice would fill the air. In actuality, it just smelled like burning. 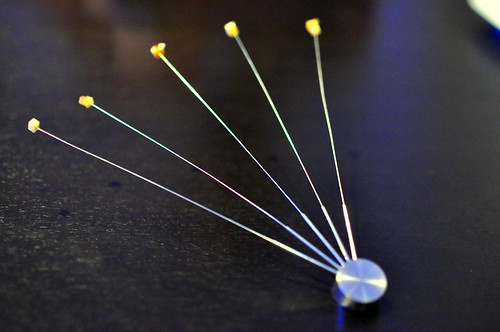 A ginger sampler followed the cheese course. Alinea has been “cultivating a relationship” with ginger growers in Hawaii, according to our waiter, and these tastes were the product of that partnership. The teeny tiny bites of tumeric, galangal, and ginger couldn’t be fully savored because they were each only slightly larger than a pinhead and faded instantly in my mouth as a result. 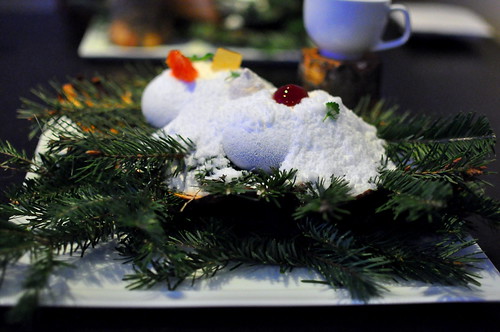 The course that made me giddiest was this winterscape featuring sour cherry pudding, macerated blood orange, gingerbread marshmallow, and honey gelee. While the “snow” wasn’t meant to be the star of the plate, I could not get enough of its fluffy texture and peppermint fresh flavor. The rocks, which were dunked in liquid nitrogen, kept the snow powdery for ages. On the side was a small mug of clear hot chocolate. 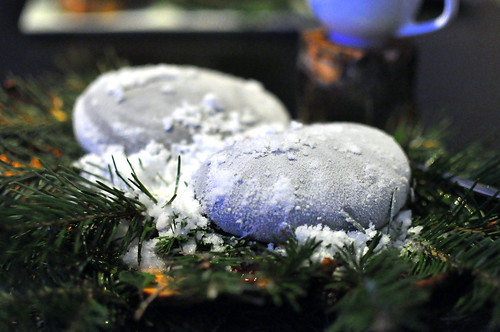 I shoveled as much of the snow from the rocks into my mouth as possible. This course was pure love. 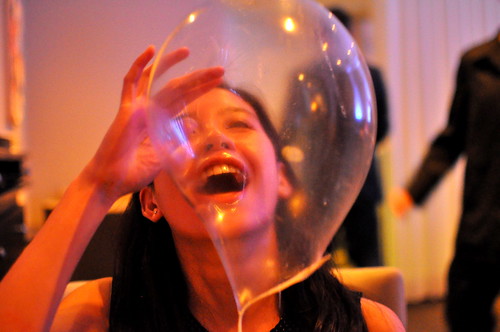 The penultimate course of the night featured a balloon made of green apple taffy filled with helium. We were instructed to puncture the balloon with our teeth, inhale the helium, speak high-pitched nothings to each other, and then devour the balloon and its string made of dried apples. We did as we were told and were delighted to no end. Our hands and mouths were totally sticky by the end, but damn, it was worth it! 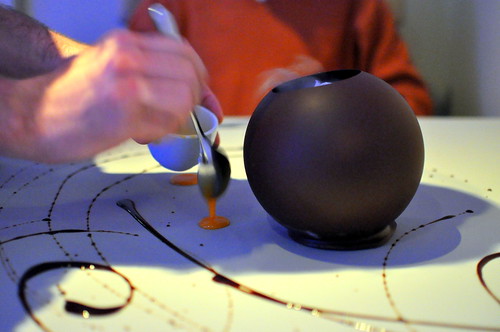 For the grand finale, one of the chefs made an artful spread upon our table. After rolling out a silicon mat on the table and setting down a smoking chocolate sphere in the center, he decorated the table with swirls of stout, marigold petals, and squares of lingonberry and orange-butternut squash sauces. 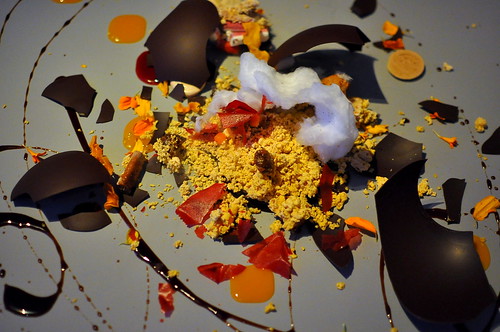 Before departing, he ceremoniously lifted up the sphere and let it crash down, spilling the sweet potato chips, cream cheese bites, toffee candies, fruit leather, cotton candy, meringues, and cake contained inside across the table. 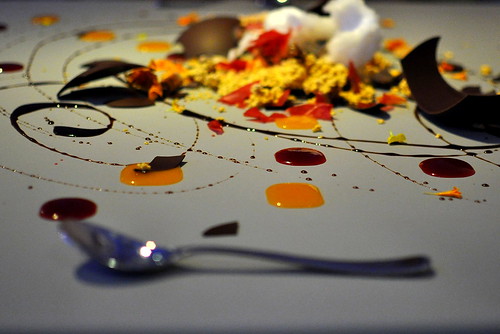 We ate the delicious mess with spoons, seeking out our favorite flavors. He hunted for marigolds, while she searched for toffee. 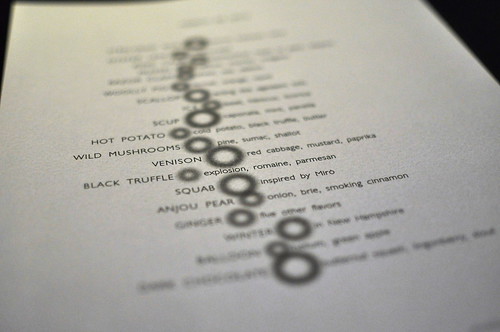 I often ask myself at the end of extravagant meals if it was in fact “worth it”—worth the cost, worth the time, and worth the effort. If the service this evening hadn’t been so lukewarm, I would not hesitate to recommend a meal at Alinea to all restaurant lovers. However, based on the experience we had this evening, it’s difficult to  justify the $600 price tag ($210 per person, plus tax, tip, drinks). There were definitely courses that elicited oohs and ahs, but not enough to make up for the lack of finesse service-wise. A third visit isn’t completely out of the cards, but I’m in no rush to return anytime soon.