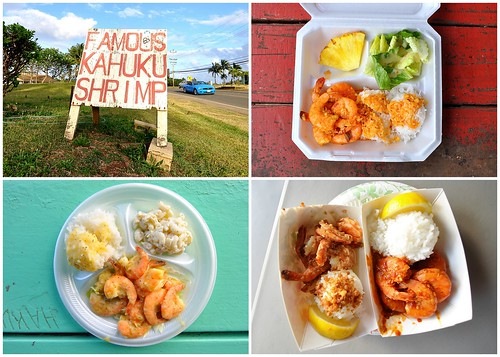 One of the highlights of our Hawaiian holiday was a day trip to Oahu’s North Shore to experience its beautiful beaches and to dine at its famous shrimp trucks.

After working up an appetite swimming and sunning all afternoon, The Astronomer, Luscious, and I hopped in our rental car and cruised along Kamehameha Highway toward Kahuku, a town known for its shrimp aquaculture. We hit up three trucks this early evening: Fumi’s Kahuku Shrimp, Famous Kahuku Shrimp Truck, and Giovanni’s Original White Shrimp. 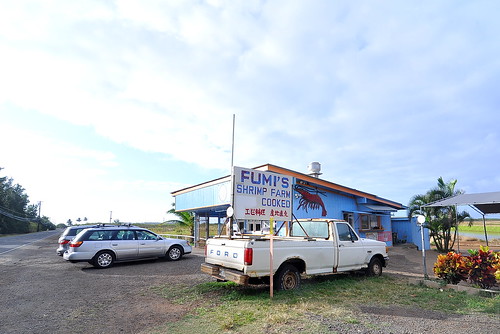 Our first stop was at Fumi’s Kahuku Shrimp, a stand located adjacent to the owners’ shrimp farm. Talk about unbeatable freshness! 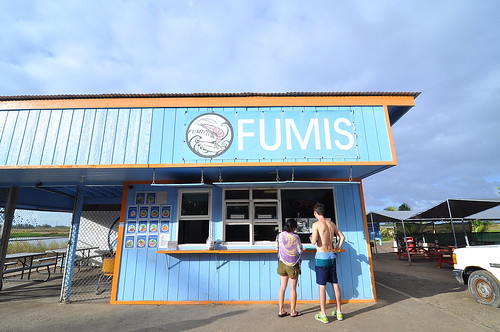 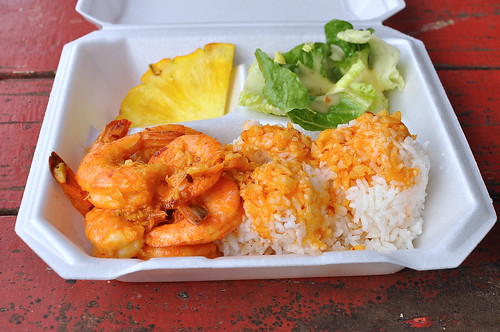 We dug into the Spicy Garlic Shrimp ($13) and swooned at first bite. The headless, shell-on shrimp were perfectly cooked, while the sauce was beautifully balanced—neither too punchy from the garlic nor too hot from the chilies. This preparation reminded The Astronomer and me of one of our favorite L.A. shrimp dishes: ConiSeafood’s camarones borrachos. Mmm! 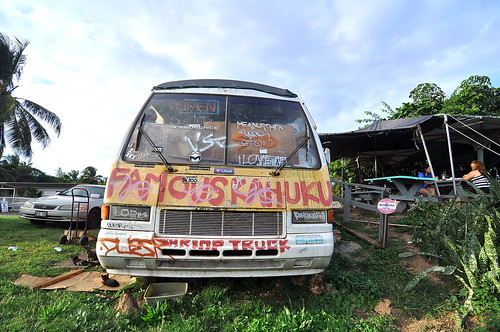 Next, we pulled over to try the Famous Kahuku Shrimp Truck, which had a well-worn and graffitied exterior. If we didn’t know any better, we would’ve thought that this vehicle was abandoned. 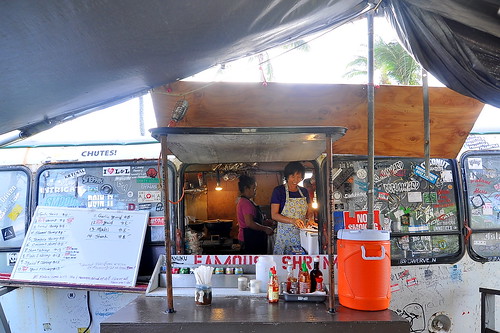 The ladies aboard the truck were really sweet, patient and smiley while we decided which dish to order. 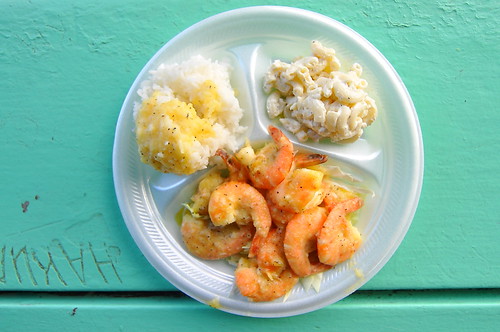 We were hoping for a spicy-garlic number similar to the one at Fumi’s, but settled on the Garlic Shrimp ($11) when we saw that it wasn’t offered.

The texture and flavor of the shrimp here couldn’t match Fumi’s pitch-perfect specimens. The garlic sauce tasted more of the powdered stuff than of fresh cloves, while the shrimp were just a touch overcooked. 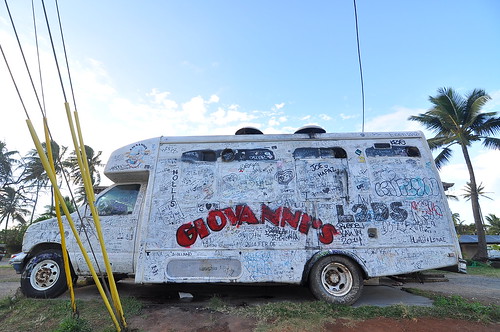 Our last stop was at Giovanni’s Original White Shrimp, which began operating out of a converted bread truck in 1953. It is the oldest and best known of the North Shore’s shrimp trucks. Fun fact: Ed Hernandez from El Paso, Texas was the first customer to sign the truck back in 1993. 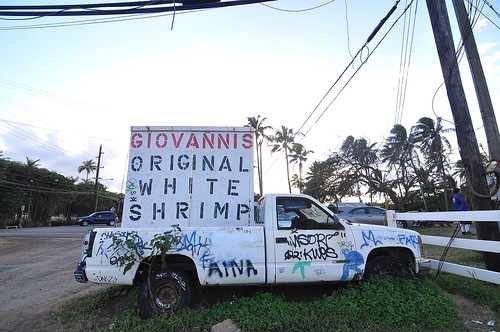 According to Honolulu Magazine, the truck cooks up “frozen shrimp from a wholesaler who sources locally when possible, internationally when not.” Interesting… 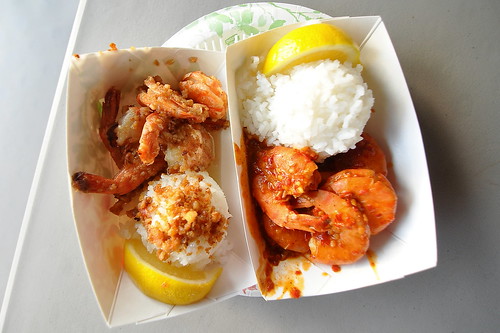 The folks aboard Giovanni’s were kind enough to let us split our order between two different preparations ($13)—a half dozen of the Scampi and another half dozen of the “No Refunds Hot & Spicy.” Both were heartbreakingly bad.

The Scampi had a blunt garlicky flavor profile that was seriously off-putting. Garlic can go from raw to acrid, skipping sweetness all together, when not prepared tenderly, and that’s just what happened here. The “Hot & Spicy” lived up to its name but lacked any finesse. What a shame.

While not every stop on our shrimpin’ adventure was a hit, we still had a damn good time exploring the tradition. Fumi’s for the win!