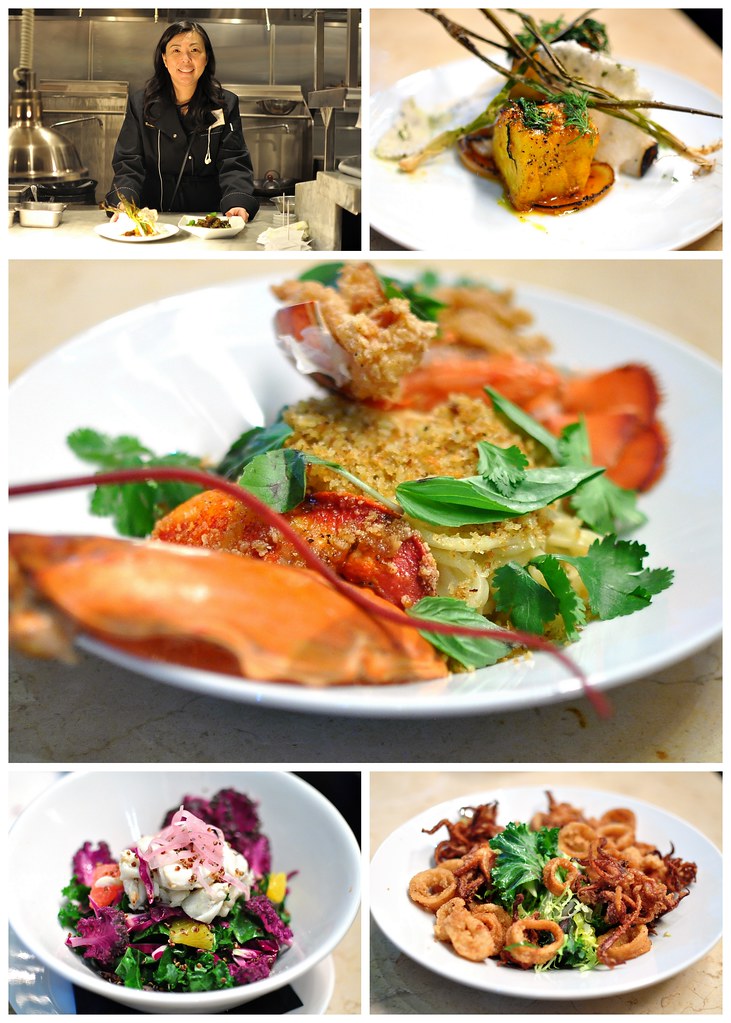 In the mood for fancy Vietnamese? Well, I’ve got the place for you. Filing my sixth Scouting Report, “Elegant Vietnamese dining in West Hollywood at the District by Hannah An” on the Los Angeles Times‘ Daily Dish.

Name: The District by Hannah An — a reference to the diverse neighborhoods, called districts, of Vietnam from which the menu draws — opened in early February on West Third Street in West Hollywood, near A.O.C. The two-story restaurant is dimly lit, with clean lines and a minimalist aesthetic, including modern chandeliers and (yes) Edison bulbs.

The chef: Hannah An steps behind the stoves and into the spotlight after learning the ropes first at her grandmother’s restaurant Thanh Long in San Francisco and later at her mother’s restaurants Crustacean, AnQi and Tiato. Her take on classic Vietnamese dishes is deeply personal and decidedly stylish.

Concept: An exploration of Vietnam’s rich culinary traditions with a nod to California’s abundant produce and sensibility. The menu takes diners on a tour of regional favorites from north, south and central Vietnam, with flavors staying true to their roots, ingredients sourced with care, and plating fitting of the upscale setting.

What dish represents the restaurant and why: The District Wok Lobster ($32) continues the An family tradition of serving crustaceans with carbs. Bite-sized tails and claws are wok- roasted and heaped over handmade garlic-lime-butter noodles with herbed panko and fresh herbs.

And in case you’re curious, there isn’t a secretive family-only kitchen to prepare this dish — at least not yet. (The An family has built a “secret kitchen” within all of their restaurants’ kitchens since Thanh Long to guard recipes — although, oddly, not this one.)

Runner up: Filets of Chilean sea bass are given an aromatic marinade of fresh dill and turmeric in the Cha Ca ($35). Served with vermicelli noodles and sauteed onions, this version is less oily and more refined than the Hanoi original, but it doesn’t miss a beat flavor-wise.

Who’s at the next table: The dramatic patio, fitted with flames on tabletops and along the perimeter, attracts couples on first dates and women enjoying a night out.

Appropriate for: Shoppers in need of fuel following sprees on nearby Robertson Boulevard, as well as Vietnamese food lovers who don’t mind the prices compared to the San Gabriel Valley or Westminster.

Service: The staffers are as knowledgeable about the cuisine as they are about the beverage program. If you’re having a hard time choosing between the Crab and Pomelo Quinoa ($18) and the Saigon Calamari ($13), they’ll provide useful insights to help you make a fitting decision.

What you’re drinking: While the wine and beer lists are both solid, it’s the Vietnamese-inflected craft cocktails that are most enticing. The Hot Asian packs a wallop with its lemongrass-infused vodka, fresh lime juice and chili agave. The Face Down in Saigon is perfumed with Saigon cinnamon three ways.