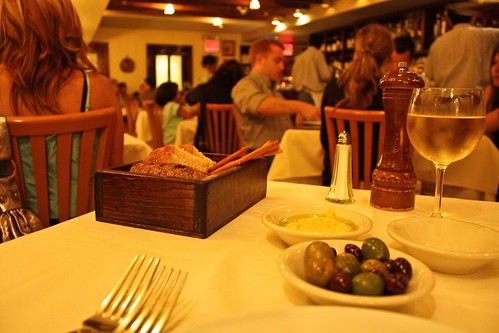 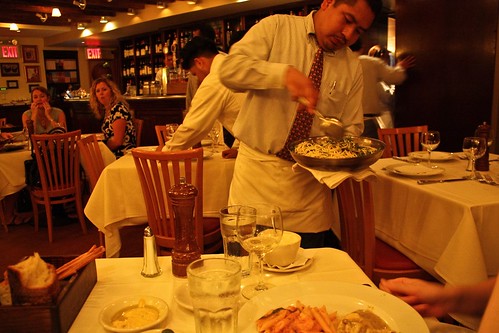 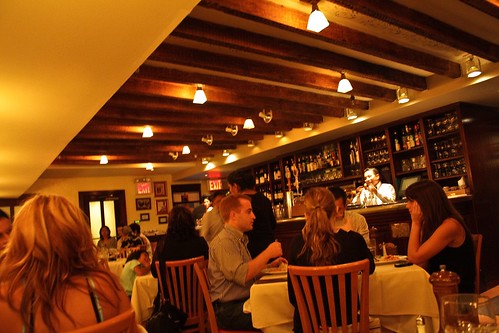 Primi:
Sinfonia di Paste -Unlimited servings of our three pastas of the day

The meal at Becco’s was perhaps one of the most extravagant affairs in my dining career. Our group had a private room and a pre-set menu designed at $82 a head without tax or tip. The restaurant was relatively large compared to many other NY restaurants and busy the evening we dined. Research has uncovered that Becco is one of Lydia Batianich’s restaurants and opened in 1993. I’ve always wanted to dine at a Lydia restaurant because her persona on her PBS cooking show screams authentic Italian. Our meal lasted three hours and included unlimited wine that I didn’t partake in. I prefer not to drink my calories.

Before the courses began we were brought an assortment of breads and olives. Since I was saving room for the actual meal, I only tried the foccacia, a bread stick and a couple olives. All were good, but nothing to write home about. Our first course was the antipasti — we had an antipasti platter filled with flavorful veggies along with some fresh mozzarella. My favorite items on the platter were the corn, eggplant, zucchini and yellow squash. We were also served two fish antipasti that I thought were only okay. Cold fish is something I’m not too big a fan of. We also had peas accompanied by fresh ricotta cheese — good texture and mild in a good way. Lastly we had a Caesar salad which I hardly ate because it was boring, definitely your average Caesar salad.

After our antipasti we were served three pastas — a penne with marinara, fettuccine with bolognese and some “gnocchi.” I definitely loved the pasta course even though the penne with marinara was a bust. Penne is my least favorite shape of pasta due to it’s terrible ability to hold on to sauce and the marinara was very bland. Great thing the two other pastas made up for it. The fettuccine was absolutely fresh and cut in thicker ribbons, almost like a pappardelle, which is my favorite pasta shape. The bolognese was also quite excellent and I think I tasted the employment of cinnamon sticks. The highlight of the pasta course was the “gnocchi.” While the servers called it a gnocchi it was definitely very different from your average potato ball with ridges. In fact, I don’t think the pasta contained any potato. The gnocchi seemed to be made of cornmeal and semolina and shaped to look like a giant scallop. The gnocchi was doused in a lovely creamy cheese sauce and topped with fresh chives. SO very good. I ate three of these gnocchi scallops. I would definitely return to Beccos just for the gnocchi.

Our meat course came next — fish, chicken and steak. I was very much out of room at this point so I only tried the chicken and steak. The chicken was moist and lemony, but I don’t care much for chicken in general. The steak was fantastic and prepared rare. Lastly came dessert!

Dessert was divine. In addition to the assortment of desserts offered at the restaurant (cheesecake, panna cotta, chocolate mousse) we were brought a number of gelatos and sorbets including passion fruit, sour cherries, basil and a few more. I devoured the cheesecake and panna cotta; they were superb. I didn’t try the chocolate desserts because I wasn’t in the mood for chocolate. The basil gelato was very special and yummy as was the sour cherry gelato.

The Astronomer is quite jealous of my Italian feast without him so we’ll definitely have to go to Becco’s on our next trip together to the city. That is if we can’t get a reservation at Babbo for the pasta tasting menu.