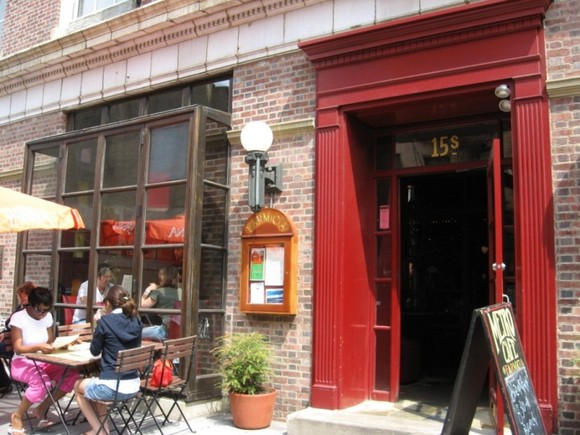 At Farmacia the emphasis is on “great tasting food crafted from local, organic, and artisanal producers.” The Astronomer and I dined at Farmicia before the Built to Spill show and found it to be a wonderful eatery.

Farmicia’s pre-meal bread is from the Metropolitan Bakery and is served with a fantastic butter with chives. On the evening that we dined we were offered three types of bread: New York Rye, White, and Baguette. We tried all three. My favorites were the baguette (crisp outside and soft inside) and the Rye (great contrast to the butter). We asked for seconds and thirds.

Appetizer I:
Gastronomer: I picked out the salad appetizer and left the second appetizer up to the Astronomer. For the salad appetizer I chose the French Lentil Salad because goat cheese, greens and lentils are a few of my favorite things. The sherry dressing was perfectly tart and not too sour as vinaigrettes sometimes tend to be. The goat cheese made the dish spectacular because of its intrinsic rich creaminess. The lentils were mixed with small diced vegetables such as carrot and zucchini. Very tasty.

Astronomer: Our meal got off to a fantastic start with a French Lentil Salad. My mom began incorporating lentils into her cooking sometime during high school, and I used to look scornfully upon them. However, they have grown on me, particularly when they are accompanied by massive quantities of goat cheese. All in all, the combination of flavors in the Farmicia salad was delightful.

Appetizer II:
Gastronomer: The shrimp appetizer came with five good-sized crispy shrimp (perhaps they were dusted with cornmeal), placed on a “corn fritter” (more like a pancake), drizzled with a lemon horseradish sauce and topped off with greens. I loved the flavor of the horseradish sauce, especially paired with the pancake. The shrimp were warm from the deep fryer. Oh boy!

Astronomer: The crispy fried shrimp were delicious. I made a split-second decision to order them, and for a second afterwards I was scared I might actually not like horseradish sauce, but they turned out to be as tasty as I had hoped. The sauce was good enough to warrant sponging up with bread.

Entree I:
Astronomer: Despite the success of the appetizers, the true highlight of the meal was my entree: duck breast with raspberry basil sauce. It was some of the most delicious meat I have ever enjoyed. It was somewhat questionable how much it actually tasted like raspberry, but whatever it was, it was good. The duck came with carrots and fennel and wild rice with almonds. All of them were well executed, and I even enjoyed the wild rice. In all honesty, however, during the time I was eating the side dishes I was usually anticipating my next bite of duck. Needless to say, at the end of the meal, bread was a good vehicle for raspberry sauce.

Gastronomer: I had one bite of the duck (prepared medium rare) and found it moist, tender and down right perfect! The wild rice was nothing special, but to be fair, it is pretty much impossible to compete with an amazing duck.

Entree II:
Gastronomer: I chose the eggplant cannelloni for my entree. The dish was served in a TV dinner like platter. The side dishes were in little compartments on the “tray,” which is perfect for a girl who hates “contaminated” food. The cannelloni was fantastic! The filling really made the dish; the ricotta cheese was mixed with spelt and had the most wonderful texture. The eggplant and marinara sauce were pretty basic, which let the filling shine. I was served three cannelloni, but could only finish two. The cannelloni came with three side dishes: firstly a carrot, mushroom and onion mixture, secondly some white beans in a vinaigrette, and thirdly some sauteed broccoli rabe. I adored the mushroom dish the most, even though it was on the oily side. I hated the broccoli rabe because it was extremely bitter. Two for three isn’t terrible.

Astronomer: The Gastronomer ordered roasted eggplant cannelloni. I steered clear, as I am afraid of eggplants and tomato sauce. Perhaps I should have helped her out–there were leftovers, but unfortunately the last cannelloni was eaten by Chinatown.

The food at Farmicia is very delicious, well thought out, and presented beautifully. Our only complaint was the pacing of the meal. The appetizers were brought out quickly and our entrees soon followed. As a result, I couldn’t finish my entree and had no room for desert. What a shame.