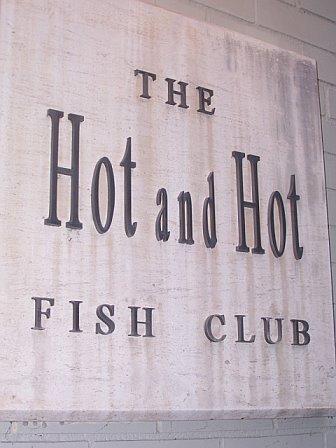 Birmingham’s fine dining scene is a mix of high-quality ingredients, French preparations, and southern staples. This unique treatment of food cannot be found anywhere above the Mason Dixon. While Highland’s Bar and Grill set the bar for this tradition, Hot and Hot measures up nicely, especially in the dessert department.

The Astronomer’s family and I went to Hot and Hot for dinner during my recent visit down south. With such a big group of diners, we were able to order a variety of dishes and share each other’s delights.

Appetizers:
Gastronomer: I ordered the Proscuitto Di Parma Wrapped Figs because anything wrapped in bacon has to be great, right? Plus figs are one of my favorite fruits. I thought this starter was only so-so because the figs should have been sweeter and the bacon saltier. When pairing fruit with bacon the sweet/salty flavors need to be perfect. The figs sat on a bed of lightly dressed arugula, which was a decent contrast, but nothing spectacular. The blue cheese saved the day.

The Astronomer ordered the duck sausage. A generous link was presented atop some cabbage. I loved the cabbage, but found the sausage too mild. I like my sausages bursting with spices and flavor, but perhaps the chef wanted the natural duck flavor to come through.

The Astronomer’s brother Dan ordered the spring rolls and shared one with us. “Spring rolls” is a misnomer because it was deep fried, which makes it an egg roll. The egg roll was okay and so was the sauce. Restaurants like Hot and Hot should really avoid Asian fusion dishes. It’s just not their strong suit.

Also, it must be noted that the restaurant’s tableside bread (sliced baguette rounds) was the best baguette I’ve ever had.

Astronomer: My family went a bit crazy when ordering appetizers, as all 6 diners got our own. I copied my granddad and chose the smoked duck sausage. It was tasty, but I feel that making duck into a sausage might be a waste of a delicate and delicious meat. The Gastronomer’s dish was also good but not amazing–I do love greens served with strong cheeses.

Entrees:
Gastronomer: I loved my pork and beans entree. The meat was tender and plentiful (I shared quite a bit with the Astronomer and his father), the collard greens were perfectly overcooked in the Southern tradition, and the cornbread was absolutely phenomenal. And just in case you’re wondering what “chow chow” is, it is a mixed vegetable and pickle relish. The dish was a fantastic combination of flavors and textures. An upscale rendition of a classic southern dish.

The Astronomer’s meat was out of this world. Prepared rare and drizzled with chive aioli, the dish was right on.

Astronomer: For my main dish I ordered a sirloin. It was pretty awesome–tender, juicy and satisfying. Once again the blue cheese was an ideal complement, as were the tamarind sauce and chive aioli. I had wondered whether ordering a steak at a “fish club” was a mistake, but I needn’t have worried. I also enjoyed eating my brother’s left over baby potatoes from his fish in a bag. The only downer was that the air conditioner blew straight down on my steak and made it cold before I had finished eating it.

Dessert:
Gastronomer:The desserts at Hot and Hot were the highlight of the meal. The table ordered three desserts to share. My favorite was the bananas foster. The carmelized bananas and fresh vanilla ice cream were presented in a nest made of candied sugar. Mmm! I have a weakness for banana desserts and this one really hit the spot.

The doughnuts were also spectacular. Each of the three doughnuts were about the size of a tennis ball, wonderfully fluffy, and paired with delicious accompaniments. One of my favorites was the Espresso Cream and Brittle doughnut. The cream was not too strong, but rather sweet. I also enjoyed munching on the brittle with little expresso beans after the doughnut was gone.

The Astronomer and his mom ate most of the bread pudding.

Next time I dine at Hot and Hot I’ll skip the appetizers and stick with the entrees and desserts!

Astronomer: We shared a number of desserts– I ordered the white chocolate and raspberry bread pudding. It was quite good, but not as special as the”Hot and Hot Doughnuts,” which might have been the best thing we ate all night. They should be a required dish at hot and hot, like bastilla at a Moroccan restaurant. The cream-filled doughnut was especially amazing, but all were incredible–soft and fluffy and just the right sweetness. Definitely worth going back for. 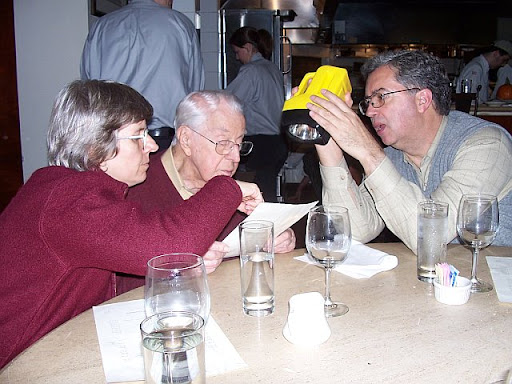 One thought on “Hot and Hot Fish Club – Birmingham”