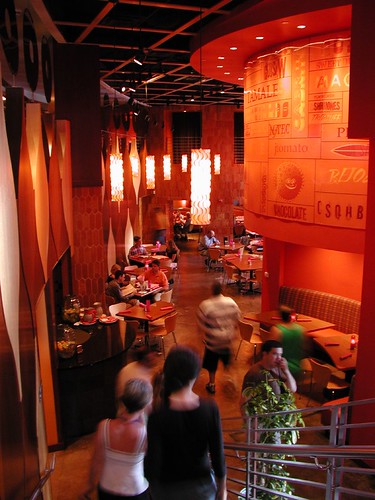 For a girl from San Diego, I don’t like Mexican food as much as I should. While there are some exceptions, namely guacamole and fish tacos, the genre doesn’t evoke any cravings if you know what I mean.

While on travels to San Antonio for work, two colleagues and I dined at Acenar. Acenar’s Tex Mex/fusion is far from authentic Mexican fare, which is definitely a good thing.

I started off dinner with the cerviche, while my co-worker had the oysters. The cerviche was fresh and sour, but nothing amazing. I wished the pieces of fish were larger. The avocado was a little unripened and the shredded icebrerg, which is sadly a staple in Mexican fare, was a waste of space. The oysters on the other hand were really great. In fact, they were the same oysters as my entree — the oyster tacos.

According to the waiter, the oyster tacos were recently voted best tacos in San Antonio, so I had to try them. The oysters were dipped in a batter that tasted like the Colonel’s Original Recipe from Kentucky Fried Chicken. Mmm. The pineapples added a nice tang to balance out the savory batter. I couldn’t really taste the oysters due to the adornments, but that’s really unavoidable. The corn tortilla didn’t do much flavor-wise for the tacos, so I ate the oysters alone. The tacos came with rice and beans, which were pretty good. The cotija cheese atop the beans were a nice touch. Overall, a very creative dish.

I had one of my co-worker’s crab tacos and thought they were great. The corn tortilla was essential for this taco because the crab was a bit salty. There was plenty of crab, but sadly the avocado was not perfectly ripe.

I had one bite of the Fish Veracruzano and found it to be overly dressed. The buttery sauce overpowered the fish’s natural flavors. I prefer fish preparations to be on the light side so that the fish shines through.

One thought on “Acenar – San Antonio”