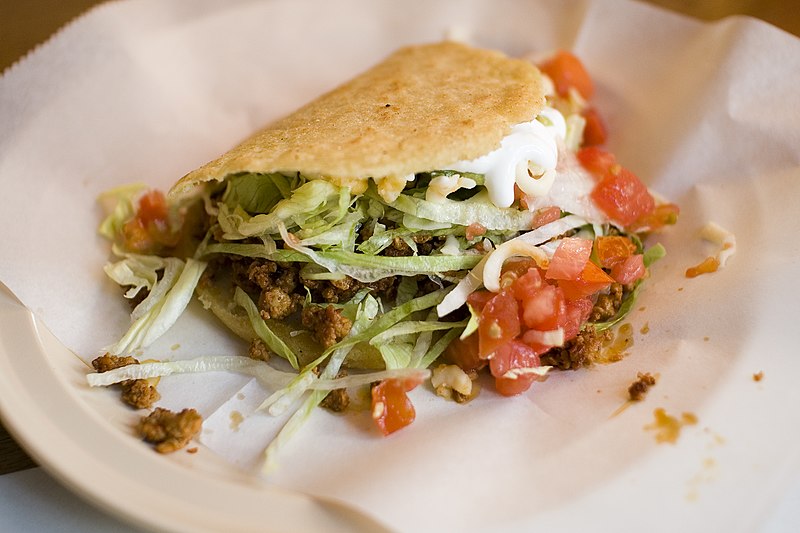 For our final meal in San Antonio, some locals took us to a hole in the wall Mexican joint for some authentic native fare. The restaurant was definitely off the beaten path and was packed for lunch. While I’m not the biggest fan of Mexican food, I was curious to see how Freddy’s compared to San Diego’s Mexican fare.

Freddy’s looked a lot like a SoCal taco shop (plastic tables and booths, funky yellow walls), but was a lot bigger and did not have a drive through. The locals ordered the gordita special, so I did the same even though I was leaning toward the tamales. Let me tell you, I felt really funny saying, “I’d like a gordita, please.” It’s kind of like saying, “I’d like to be fat, please.” I ordered one chicken gordita and one beef.

I had heard of a gordita before thanks to Taco Bell, but really wasn’t sure what it was. According to Wikipedia, “A gordita is a food which is characterized by a small, thick tortilla made with corn flour. The gordita is typically baked on a comal, a small pan similar to a skillet. The gordita’s thick tortilla is typically split and filled with guisos (soups or stews) or casseroles, like chicken, cochinita pibil, nopales, carne al pastor, etc. These are made mostly for lunch and are accompanied with many different types of salsas.”

My gordita did not come with different types of salsas, although red and green salsa were already on the table. The gorditas came with small sides of rice and beans. The rice and beans were very similar to the ones I’ve had in San Diego. The gorditas were quite tasty. The beef gordita contained ground beef that was well seasoned, if not a little on the greasy side. However, I feel that grease is to be expected and welcomed when it comes to Mexican food. The chicken gordita was slightly less greasy and surprisingly flavorful; I tend to expect the worst when it come to chicken. The chicken was shredded and also seasoned nicely. Both gorditas were stuffed with iceberg lettuce and tomatoes. I discarded the iceberg.

The best part of the gordita is the thick corn tortilla. The texture is just so yummy—kind of like nacho chips that have lost their crispness due to a heavy dousing of cheese and meat.