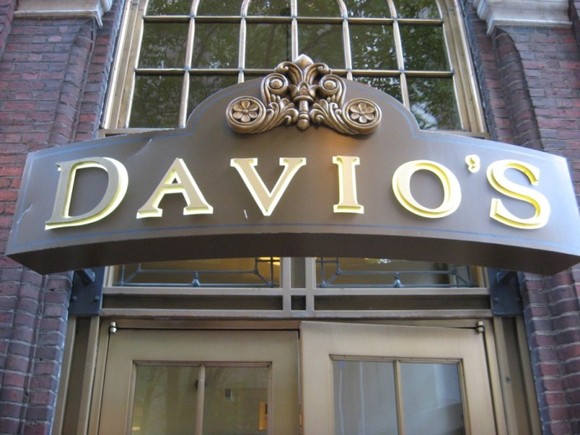 P/PV had our annual holiday gathering yesterday afternoon at Davio’s Northern Italian Steakhouse. As far as office parties go, this one was one of the best. The food was phenomenal, the band was festive, the room was gorgeous, and the company was good too.

The party began at noon, but I didn’t arrive until 12:30 because being fashionably late never goes out of style. When I arrived, the three-piece band was in full swing playing peppy holiday music, waiters were walking around with Hors D’oeuvres, an antipasta station was set up in the back of the room, and the bar was open with wine and top shelf liquors. I passed on the booze because I don’t drink my calories.

Appetizers: I was quickly offered a mini crab cake; the first of three or four. The crab cake was placed atop a crustless round of white bread and dabbed with a Caper Aioli on the bottom to adhere it to the bread. The crab cake was excellent – slightly crisp on the outside, large chunks of crab on the inside, and its natural flavors brought out by the aioli. Another appetizer standout was the Philly Cheesesteak Spring Rolls; I had two of those. A better name would have been the Philly Cheesesteak Taquito because it was deep fried. I liked everything about it – the meat was salty, the wrap was crisp, and the ketchup was spicy. Well done. I had one of the Smoked Salmon appetizers, which was pretty good. However, the potato chip had a very strong taste so it sadly outshined the more delicate Lemon Mascarpone and fish.

The antipasta station had a good selection of meats and cheeses, as well as fruits (berries and figs) and vegetables to complement the flavors. My favorite cheese was the smoked Gouda. The smoky flavor was divine. There were stronger cheese offerings as well, including two types of goat cheese. However, they were a bit too intense for lunchtime. I also really enjoyed the prepared mushrooms. My favorite cured meats were the salami and prosciutto.

Main Course: The salad, pasta, side dishes, and meat were served buffet-style. I passed on the salad because greens are a waste of precious space. I went with a piece of roasted filet mignon drizzled with the gargonzola sauce, a side of asparagus, and both types of pasta. The filet mignon was delicious; it made me appreciate cows all over again. I received an end piece of the roast, so it wasn’t as rare as I would have liked but tasty nevertheless. The gargonzola sauce was good, but not needed because the meat itself was fantastic. The asparagus was simply prepared. The pastas were excellent as well. Even though I hate penne as a pasta shape, I couldn’t complain about the accompaniments. I loved the sun dried tomatoes. The rigatoni was stuffed with ricotta cheese, which was creamy and mild. The rose basil sauce was the perfect sauce choice. I tried to go back for some polenta, but they were fresh out. So I moved on to dessert!

One thought on “Davio's – Philadelphia”