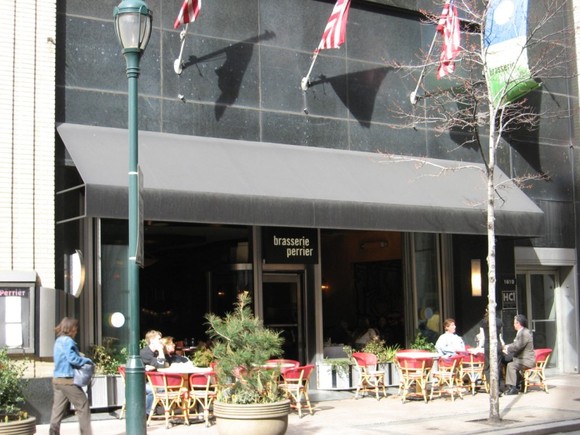 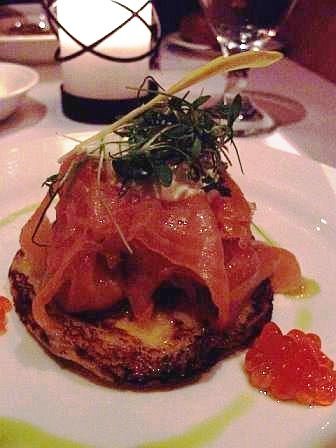 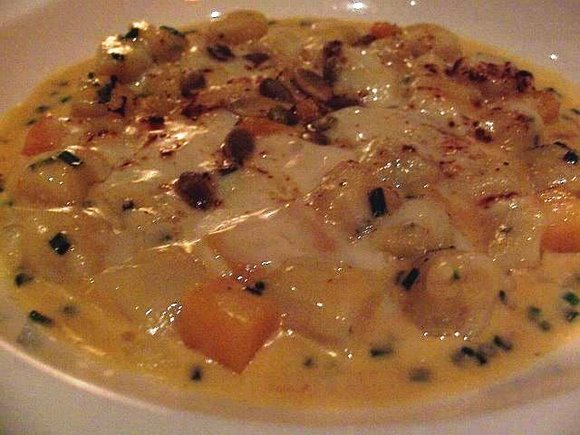 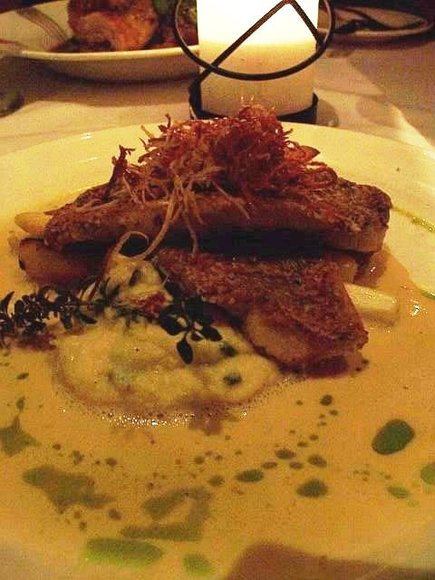 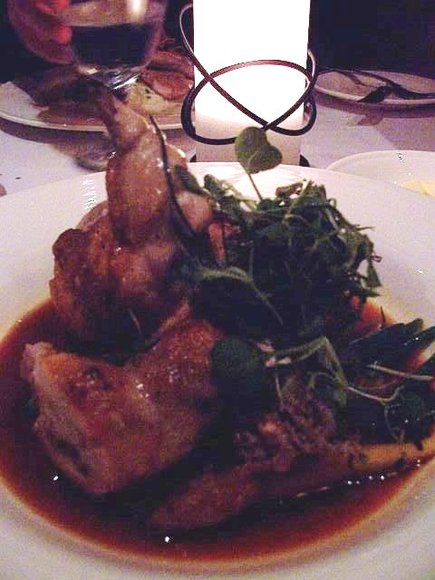 Our dinner at Brasserie Perrier was hands down one of the best meals the Astronomer and I have ever eaten. I dined at BP once before with my brother during Swarthmore Family Weekend 2004, but didn’t think too highly of it because we ordered strange items like sweetbreads and wild boar. This visit was a totally different story…

We started our feast with two appetizers. I chose the smoked salmon, while the Astronomer chose the gnocchi. I had read good things about the smoked salmon and liked the fact that the fish was smoked on the premise. A more than generous portion of thinly sliced smoked salmon was placed atop a potato blin, which is a small, yeast-leavened, buckwheat pancake. The smoked salmon was luxurious! The salty fish paired beautifully with the hearty blin and rich lemon crème fraiche. The red pepper “caviar” was made with science, but tasty nevertheless. I especially liked how each “egg” popped in my mouth and released it’s flavor. The smoked salmon appetizer was incredible.

The Housemade Potato Gnocchi was also outstanding. The Astronomer described the gnocchi’s texture as “delicate.” I had a couple of bites of the dish and totally agree; each gnocchi melted in my mouth. The butternut squash added a wonderful sweetness and the pepitas brought about an interesting crunch. The cheese and sauce were amazingly rich and creamy. Almost too much goodness for my taste. It’s a good thing the Astronomer prefers decadent sauces. The dish was a refreshing and innovative take on the classic Italian dish.

For my entree I ordered the chicken, while the Astronomer ordered the sea bass. We traded plates numerous times throughout the meal because sharing is caring. Even though I think chicken is an inferior meat, I had a good feeling about BP’s preparations. While I’m not a full convert yet, I’m on my way because this dish was the greatest chicken I have ever eaten.

The juices were locked in and the spices (probably just salt and pepper) were perfect. The forest mushroom stuffing was also very lovely. In fact, I would have liked a side of mushroom dressing. The polenta cake was wonderfully dense and full of buttery flavor. The dish also included some sautéed vegetables including green beans, spinach and baby carrots. Wow, what a combination of flavors!

The Astronomer’s sea bass was equally divine, but much more subtle in flavor. The sea bass was battered very lightly and fried to a perfect crisp, skin included. The batter was salted nicely and thus contrasted impeccably with the sweet pureed parsnips. The dish’s only flaw was the braised Belgian endive; it was much too bitter to be enjoyable.

By the time dessert rolled around, we were much too stuffed to indulge. I look forward to returning to BP for their lounge menu which includes fondue and steak frites!

One thought on “Brasserie Perrier – Philadelphia”