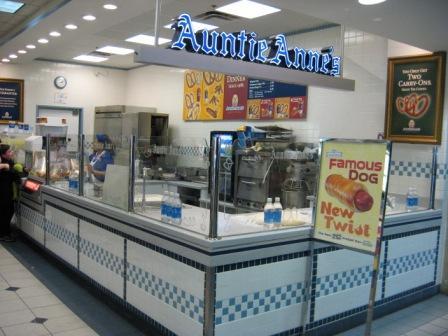 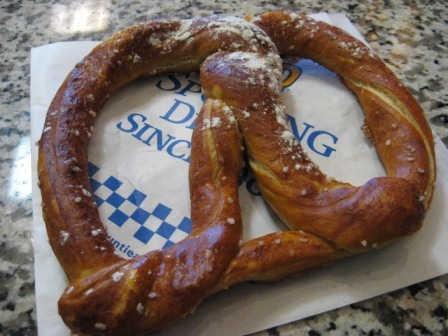 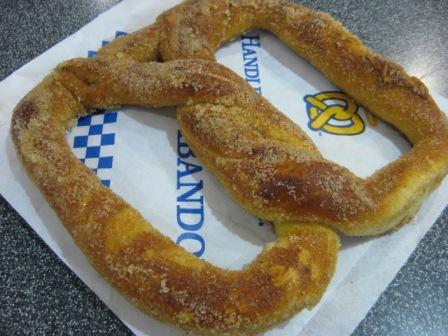 I thought long and hard about whether or not to include a mall-staple like Auntie Anne’s on gas•tron•o•my. On one hand her pretzels are pretty darn good, but on the other, it’s merely food court cuisine. In the end I decided to muffle the food snob within and embrace the deliciousness of Auntie Anne’s pretzels and share my enthusiasm with the world.

The Astronomer turned me on to Auntie Anne’s early in our relationship. In fact, we used to fund our pretzel fix back in the day with gift certificates from his ex-girlfriend! Oh, awkward.

During a layover at DFW, I was in a savory mood and procured a Garlic Pretzel. For some bizarre reason, I actually thought the pretzel would contain bits of real garlic. I was sort of grossed out when I saw the woman behind the counter shaking a white powder on the pretzel. The garlic powder tickled my nose and tasted expectedly artificial. I wished I had gotten it plain because the “garlic” stayed with me for hours.

On my second layover at DFW, I ordered The Astronomer’s favorite flavor–Cinnamon and Sugar. It was warm, buttery, and sweet. On future trips to Auntie Anne’s I will avoid the pretzels that contain mysterious flavor powders (garlic, jalapeño, sour cream and onion) and stick to the real stuff (well, as real as mall food can be) like Cinnamon and Sugar.