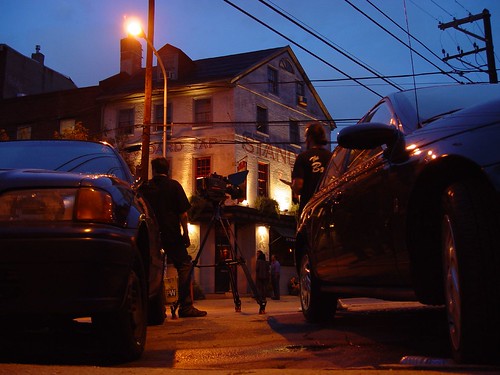 After reading a lot of press about the Gastropub trend in Philadelphia, I finally made my way to Standard Tap to see if the hype was warranted. The Astronomer and I, along with our friends Ross and Melina, walked a ways to Northern Liberties—a part of the city neither one of us had ever been to. Many of Philly’s hot new restaurants seem to be sprouting up in this part of town.

We sat at a small table for four in the main room where the bar and juke box were located. The noise level was pretty high, but expected seeing as though we were in a bar. The boys got the evening started with some local brews—Ross had the Sly Fox Stout ($4) and The Astronomer had the Sly Fox Red ($4). Both of them seemed satisfied with their choices and since I know nothing about beers, I’ll leave it at that.

For our appetizers, Ross, The Astronomer and I shared the octopus ($9). Melina had a green salad ($6). I’ve eaten a great deal of squid in my life, but this was my first taste of octopus. The octopus was fantastic—the meat was not the least bit rubbery and marinated to perfection. Our waiter informed us that the octopus was boiled first, then marinated, and then grilled. The Astronomer enjoyed the octopus as well, but was a little wigged out eating the creature’s head and tentacles. Ross found the octopus tender and surprisingly steak-like in texture. Melina liked her green salad as much as someone could like a green salad. The size of the patty on the Double Standard burger was approximately 1.5 inches thick so I had difficulty biting the entire sandwich at once. The burger was adorned with lettuce, onions, tomatoes, sautéed mushrooms, and provolone cheese. The burger was excellent, but could have used some “special sauce” to tie all the flavors together. The French fries were crisp and delicious. The pulled pork sandwich was good, but not as tasty as traditional barbecued pulled pork. The sandwich came with homemade Ruffles.

Melina liked her burger as well, but preferred the burger fixings at Monk’s. Ross found the tuna very fresh and of high quality. The flavors of the seaweed and tuna were clean and palatable and the sauce, a chipotle mayonnaise, was a nice contrast. His only complaint was that the radish and cucumber did not provide enough crunch for the dish.

Overall, I thought Standard Tap had above-average food, but lacked the little things I love about restaurants—ambiance, menus, formality, etc. As someone who hardly drinks and doesn’t frequent bars, I don’t think I can properly appreciate Standard Tap to the fullest. In the future, I’ll stick to restaurants for good eats and pubs for watching sports.

As the gastropub trend gains serious momentum stateside, Philadelphia is leading the way, particularly in the neighborhoods of Northern Liberties and Fishtown, just north of Old City.

Standard Tap in Northern Liberties was the first, and the one by which all others are measured. Nowhere in town are there better bartenders to guide you through the large local beer selection. All of the Mid-Atlantic’s top brews are on tap, including, if you’re lucky, hand-pumped Yards E.S.A. and Victory Hop Devil I.P.A. They pair ideally with menu staples like the huge plate of fried smelts and the pork sandwich on crusty bread, as well as seasonal specialties such as roasted lamb shanks. (901 North Second Street; 215-238-0630; standardtap.com)

It’s the biggest restaurant trend of the year — the British pub redefined, American style. The beers are local, the vibe is friendly, and the food is homey yet refined. It’s called the gastropub, and Philly’s Standard Tap is a star example. Take a page from chef Carolynn Angle’s menu and bring home a meal that couldn’t be more perfect for a cozy winter’s night.