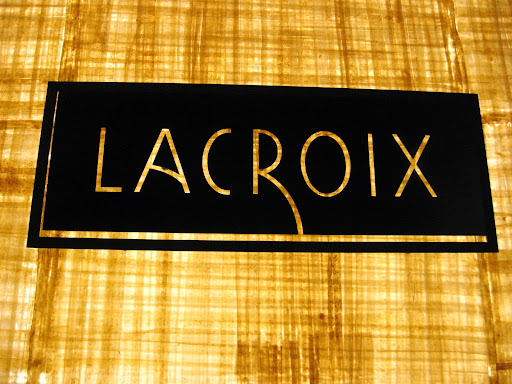 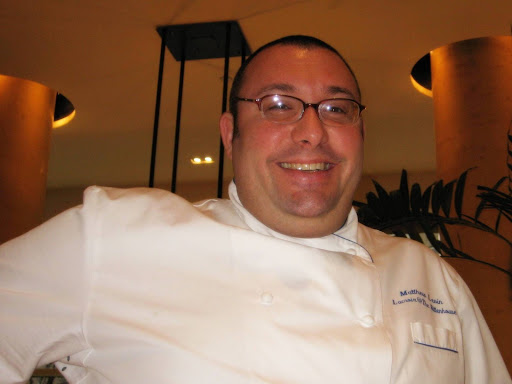 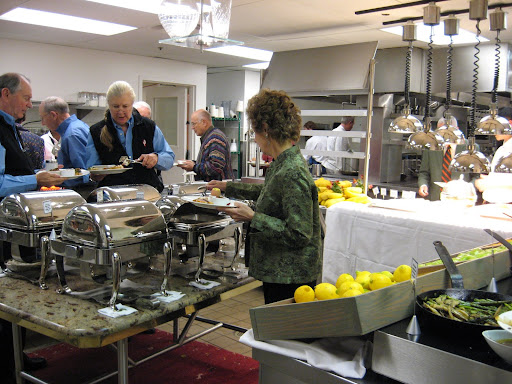 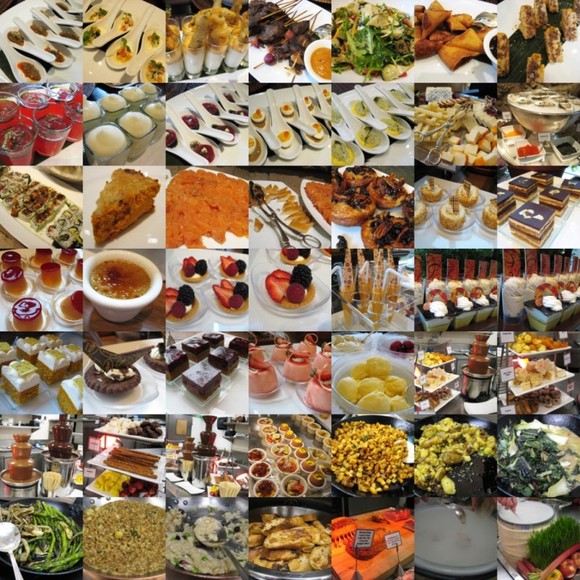 The Gastronomer: In celebration of three lovely years of togetherness, the Astronomer and I indulged in an extravagant Sunday brunch at Lacroix at the Rittenhouse. When we arrived at 11 AM, the staffers were putting the final touches on the heavenly spread. The natural light coming through the immense windows lit up the room serenely, even for a rainy April morning.

The Astronomer: As I reflect back on my meal at Lacroix and the approximately 50 different dishes that I sampled, I am once again astounded by the sheer magnitude of the experience. How can Lacroix afford to offer so much amazing food for scarcely less than the price of an entree at some other fine dining establishments? I have a feeling it has to do with the meager appetites of many of their patrons—in any case, as an Astronomer who loves to eat, I was more than ready to take advantage of the situation 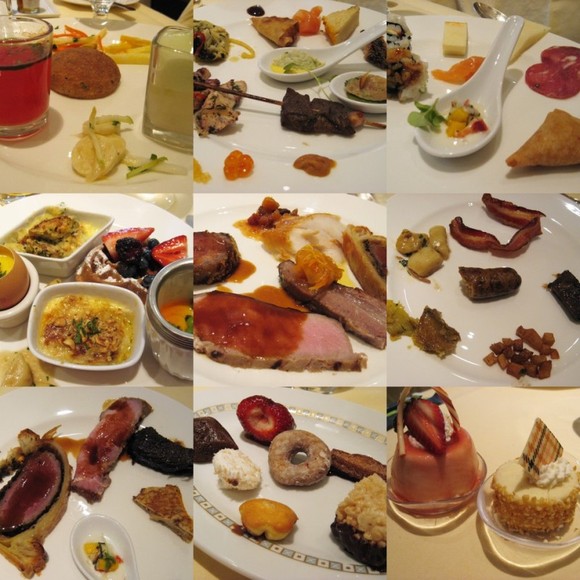 The Astronomer: The Gastronomer and I began our meal by sampling the selections from the cold appetizers. In order to avoid being overwhelmed, I served myself only a few items—I knew I had many hours of eating ahead of me. Nothing from Plate #1 (top row, first) was really amazing. I enjoyed the rosemary olive focaccia and the heart of palm salad was tasty, but the cucumber-lime foam was not as exciting as it looked. Neither was the wild berry “explosion”—Gushers fruit snacks are more explosive. I was glad that I tried the bubble tea—I’m usually not much of a tea drinker, but I found it quite enjoyable, perhaps because the taste approached Kool-Aid more than tea. I also ordered a glass of apple juice, which, as expected, tasted like apple juice.

The fun really began for plate #2 (top row, middle). I returned to the hors d’ oeuvres table and also sampled some offerings from the raw bar. The grilled Portuguese octopus salad was excellent—octopus is my new favorite sea creature. I was less impressed by the salmon roe and other caviar that I tried. Caviar may be expensive, but that doesn’t make it delicious. My favorites from this round were probably the Szechwan chicken dumpling (what can I say, I love Chinese food) and the mini foie gras ice cream sandwich (I’ll leave it to the Gastronomer to describe that one).

At this point I felt like I was just warming up, which was a good thing, because there was a lot more food to try. I decided to make one more trip to the cold food before heading to the kitchen. Plate #3 (top row, last) included two sushi rolls; they were good, but my inexperienced palate couldn’t differentiate the quality from that offered at Ajia. The yogurt “panna cotta” with Maine lobster, pickled mango, and basil was definitely a highlight. Its flavor was smooth, subtle, and refreshing. Due to the amazing variety of food available, I maintained stringent standards for which dishes would warrant a second helping. The lobster and yogurt made the cut, as did the chicken dumpling. 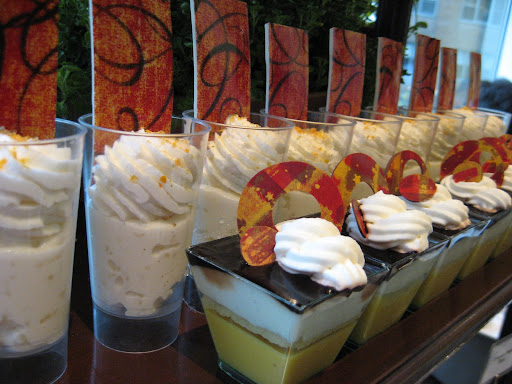 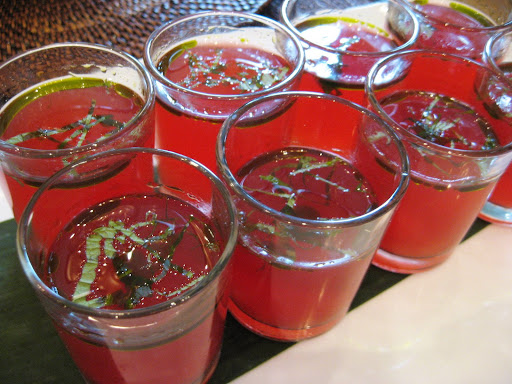 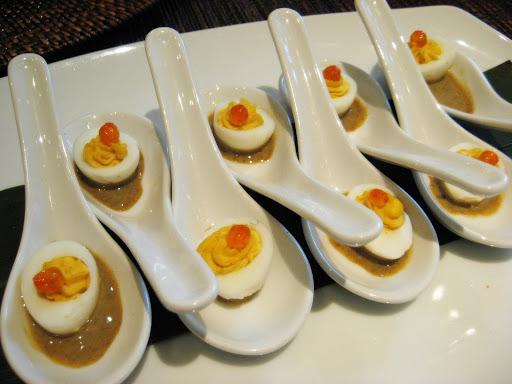 Plate #4 (middle row, first) took me to the heart of Chef Matt Levin’s kitchen, where a whole new level of adventure awaited. Nearly overwhelmed by the extent of the offerings, I decided to hold off on the meats for a bit and sample several treats in small porcelain dishes. The savory Tuscan bread pudding was tasty and might have been worth going back for more if I hadn’t been beginning to feel my stomach swell, but the others were largely disappointing. I loved the Piedmontese gnocchi—it positively melted in my mouth. I tried a Belgian waffle with fruit and also sampled some of the Gastronomer’s French toast. These items would be a highlight for me at a normal brunch, and indeed they were excellent, but somehow I didn’t feel like eating standard breakfast fair doused in syrup after sampling such extravagant hors d’ oeuvres.

When I returned to the kitchen, I finally allowed myself to begin the part of the meal that I had really been looking forward to: the meat courses. I tried a little of everything, and they were absolutely fantastic. Each was unique, with a rich flavor and well-chosen sauce for accompaniment, and all were wonderfully tender. The black cod was delicious, as was the Berkshire pork belly, although its powerful orange sauce unfortunately overwhelmed the taste of some of my subsequent bites. I loved the Vietnamese wild boar with ginger jus, but in the end, my favorite meat dish was the Wellington of Cervana venison loin with apricot-poivre sauce. The venison was surrounded by a flaky pastry, and the pieces came together perfectly.

Even after my meat extravaganza, there were a number of offerings in the kitchen that I still hadn’t tried. I passed on most of the vegetable dishes, although I did try the purple Peruvian potatoes and the sautéed potatoes with fleur de sel, which were nothing special. The Gastronomer got me excited about the Niman Ranch bacon; however, it turns out that I am just not much of a bacon fan, no matter how fine the pigs. The chicken and apple sausage, on the other hand, was quite enjoyable, and the beer braised beef short ribs were incredible. They were among the many dishes that I would have gladly ordered for an entire entree in a more traditional restaurant setting. 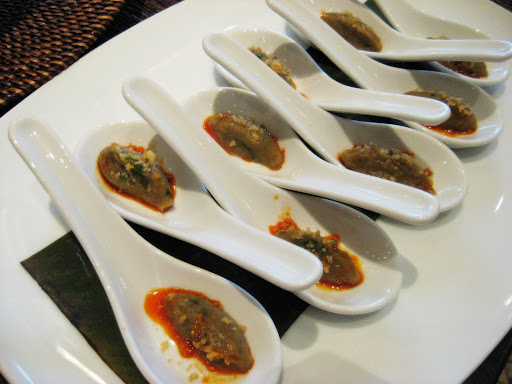 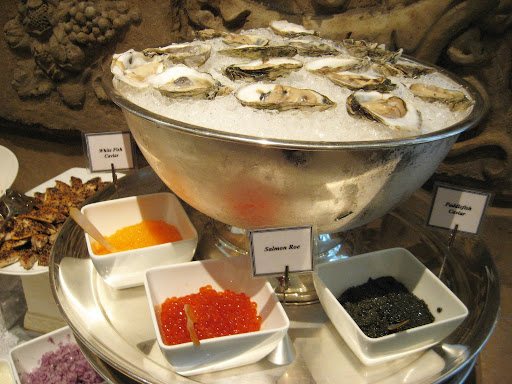 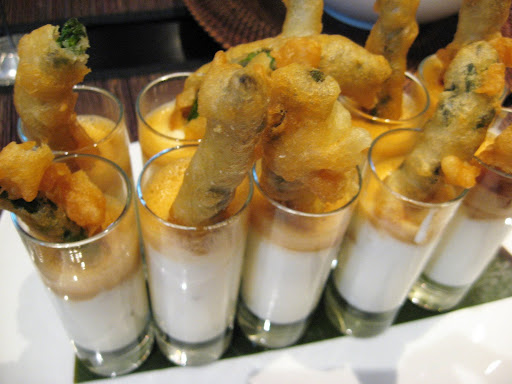 By plate #7 (bottom row, first) I was beginning to feel the effects of my earlier indulgences. However, I couldn’t leave the kitchen without taking a second helping of some of my favorites, including the short ribs, venison, and wild boar. After this we decided it was time for dessert. I sampled a number of miniature baked goods—including such personal favorites as a churro and mini-donut. It was fun dipping them in the chocolate fountains, but after the finery of my previous courses, rice crispy treats and brownies seemed a bit boring.

Needless to say, by this point my stomach was ready to explode. We still had not even touched the beautiful offerings presented by pastry chef Matt Maslowski. I carefully perused the table and selected a strawberry rhubarb tart and a small cheesecake with white chocolate. They were sweet and perfect and provided an ideal conclusion to the meal. 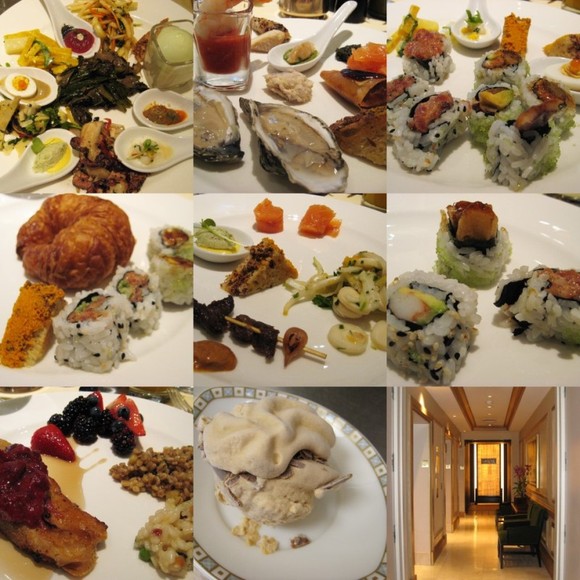 The Gastronomer: Firstly, hats off to The Astronomer for playing the Lacroix Brunch game so well! As you can see from my plates above, I ate way too much at the Raw Bar and Hors d’ Oeuvres station and hardly anything in the kitchen or at the dessert table because I was too full. I was overly excited at the start and as a result, had a disappointing finish. Oh well, I’ll do better next time. And believe me, there will definitely be a next time!

I enthusiastically sampled every offering at the Raw Bar and Hors d’ Oeuvres station (see list below). My favorites of the bunch were the Crazy Eel Roll, Deviled Quail Eggs, Jalapeño-Crab Rillette, and Mini Foie Gras Ice Cream Sandwiches. The eel roll was sweet and lightly packed so it fell apart in my mouth. The selection of sushi was so outstanding that I ate 14 pieces! The Deviled Quail Eggs were far milder than their chicken and mayo counterparts, but the Uni cream tasted like seawater. One of these days I’ll develop a taste for Uni. The Jalapeño-Crab Rillette was spicy and fresh. 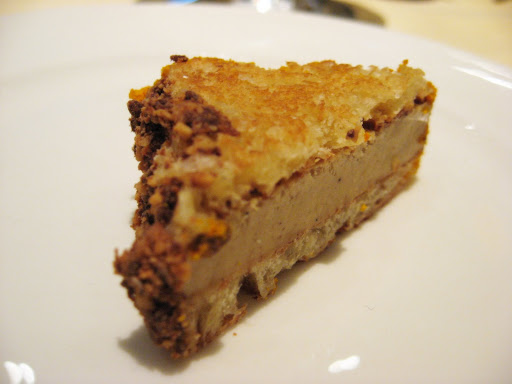 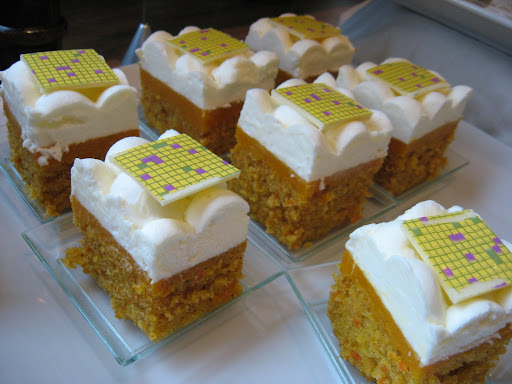 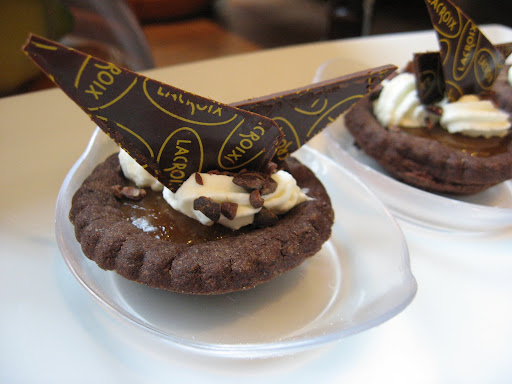 The highlight of the Hors d’ Oeuvres station were the Mini Foie Gras Ice Cream Sandwiches. Ultra thin slices of toasted white bread delightfully held together foie gras flavored ice cream. The little gems were dusted with hazelnut-orange powder and sea salt, which further brought out the ice cream’s sweetness. I was such a huge fan of this creation that I effortless consumed six. According to the Chef, I am the current record holder for the most Foie Gras Ice Cream Sandwiches eaten in one sitting.

My favorite salads were the Charred Scallions and Maitake Mushrooms with Black Truffle and the Candy Stripe Beets and Jicama, Yogurt Mint Coulis. The intense mushrooms coupled with the slightly burnt scallions was a winning combination. The beets and jicama were also an outstanding duo—the mint was incredibly refreshing and the beets were wonderfully sweet.

As I headed into the kitchen for the hot buffet, I sadly realized that I was full. Even though I wanted to sample everything Lacroix had to offer, my stuffed state required me to be discerning with my selections. From the kitchen, I chose the Pearl Barley and Apple Pilaf, Creamy Risotto with Early Spring Peas, Dried Cherries, and Roasted Pine Nuts, Fresh Berry Compote, and French Baguette Toast with Apricot Jam. Both the pilaf and risotto were bland compared to the other offerings and were mostly left untouched. The French toast was extra-cinnamon-y and so very good. The apricot jam and berry compote meshed wonderfully with the French toast. After I finished plate #7 (last row, first), I took an hour long break (in the fetal position), while the Astronomer proceeded to eat plates of meat. 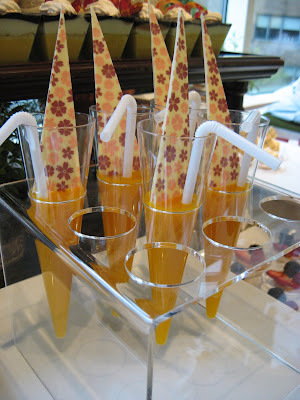 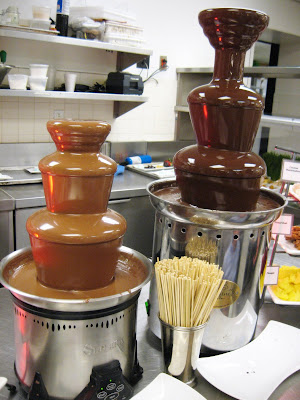 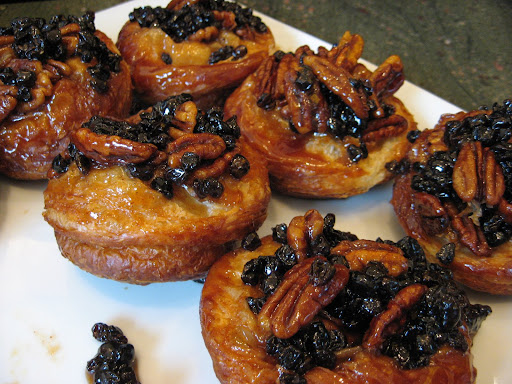 My final delight at Lacroix was the Coffee Foam with Gianduja Chocolate at the Liquid Nitrogen Station (last row, middle). I was beyond stuffed at this point, but I couldn’t pass up the opportunity to see molecular gastronomy on the ground. The woman working the station piped a coffee flavored custard mix into a small bowl, sprinkled it with Gianduja Chocolate, and added another layer of custard. She dropped the entire concoction into the bubbling liquid nitrogen. The custard floated in the nitrogen for a quick minute and was scooped out and served. The cold custard crumbled in my mouth and was extremely airy in texture. The coffee was too bitter for me, but the chocolate nicely sweetened the treat.

The Astronomer: By the end of our three and a half hour stay at Lacroix, I was stuffed beyond belief and utterly satisfied. I would go so far as to say that brunch at LaCroix was my favorite meal that I have ever eaten at a restaurant. Le Bec Fin was divine, Buddakan is always delicious, and Highlands Bar and Grill has a special place in my heart, but none can compare with the experience of sampling a stunning variety of amazing appetizers, breakfast foods, meats, and desserts in an all-you-can-eat environment. I only have a few more months in Philly, and there are many new restaurants that I still want to try, but some of these adventures may have to be sacrificed in the name of finding time for a return trip to Lacroix.

The Gastronomer: Whereas Craig LaBan had a salad for dinner after brunching at Lacroix, I had an hour long run instead. I can’t wait to return! 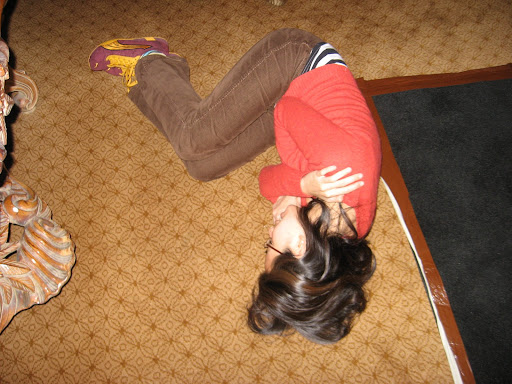 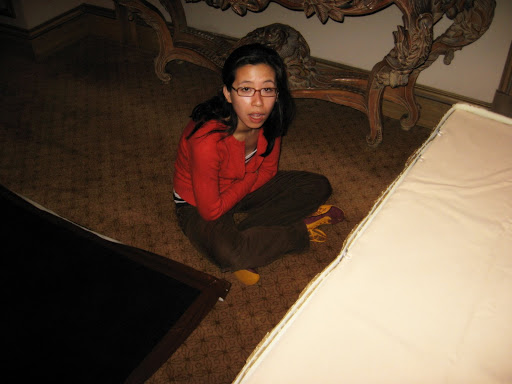 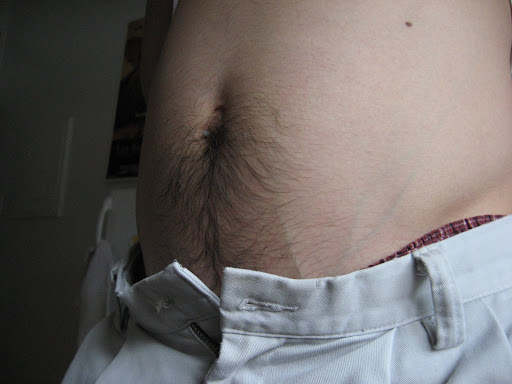 7 thoughts on “Lacroix at the Rittenhouse – Philadelphia”