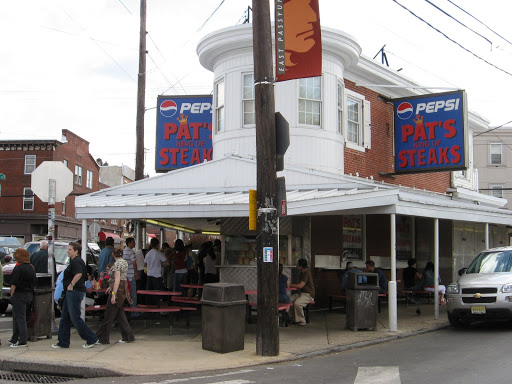 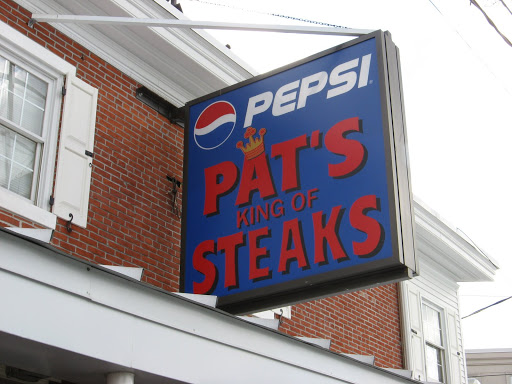 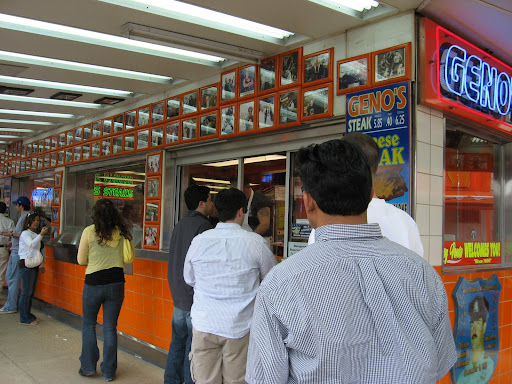 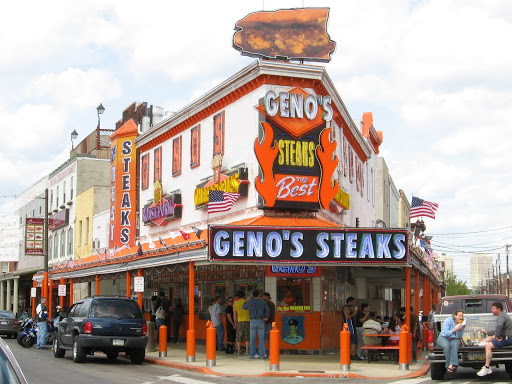 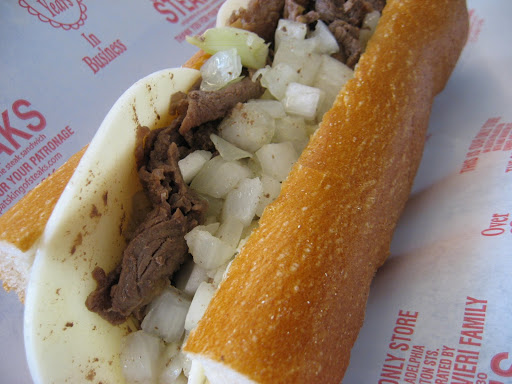 Cheesesteak with Onions and Provolone ($7) 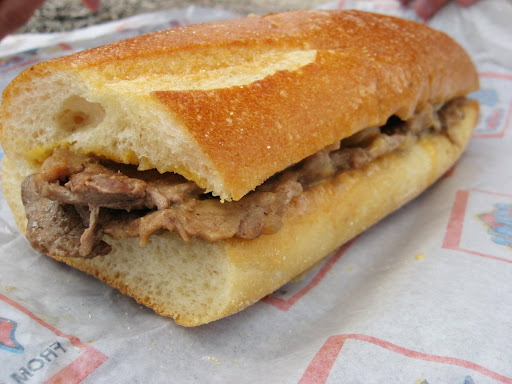 Cheesesteak with Onions and Cheez Whiz ($7)

While there are definitely superior cheesesteaks to be eaten in Philadelphia (Try Donny’s at The Grill at Swarthmore College), it’s Pat and Geno who get the most press and accolades due to their hilarious rivalry and close proximity. From the outside, Geno runs a cleaner and more modern shop that somewhat resembles Times Square. Pat on the other hand, has a no-frills white storefront with faded red tables for customers to dine at. Geno is a bit more notorious than Pat because sometime last year he publicly demanded that all customers order in English because we live in America! I don’t know where Pat officially stands on the issue, but it’s most likely the opposite of Geno.

My brother and I conducted a ‘steak by ‘steak comparison three years ago during Family Weekend and concluded that Pat made a better product, but that was ages ago. For kicks and giggles last weekend, the Astronomer and I set out to determine once and for all who makes a better cheesesteak–Pat or Geno.

Before I delve into the sandwiches, it must be noted that the customer service at both establishments is horrible. The men who work behind the counter are fat, mean, and intimidating. Small talk is non-existent; Pat, Geno, and their minions want you to pay and scram. The grill at Pat’s is also really disgusting (see evidence below). 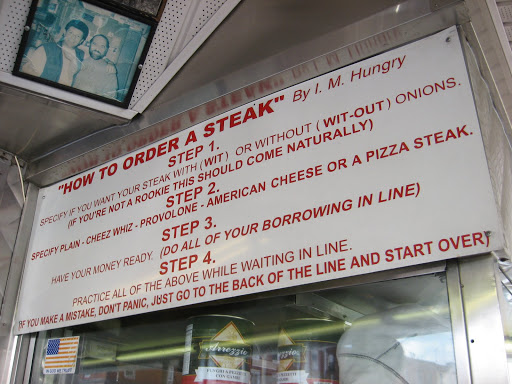 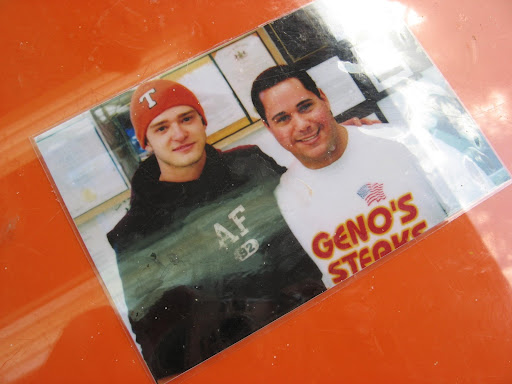 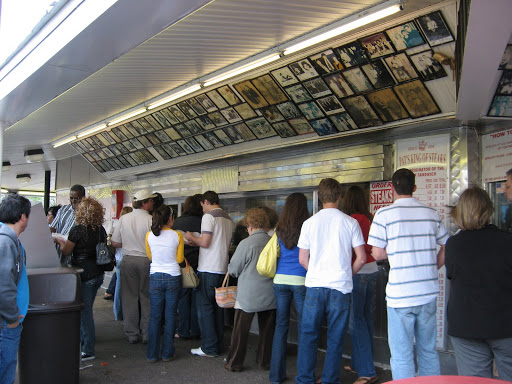 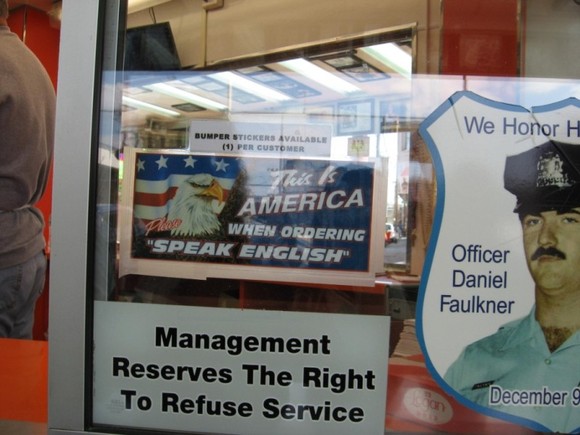 The Astronomer and I headed to Pat’s first because he isn’t a known racist. The cheesesteak was made in 2.5 seconds, which was way too fast for the provolone to properly melt. Clearly made with indifference, our sandwich was handed to us unwrapped on some butcher paper. Every table at Pat’s was occupied so we sat on a ledge across the street. My first thought as I bit into the sandwich was, “eh.” My second and third thoughts were, “the onions are still a little raw” and “there isn’t much steak here.” On a positive note, the bread was good. Surprisingly, the meat was dry considering the copious amounts of grease on the grill. I can’t believe my brother and I gave Pat’s a thumbs up. 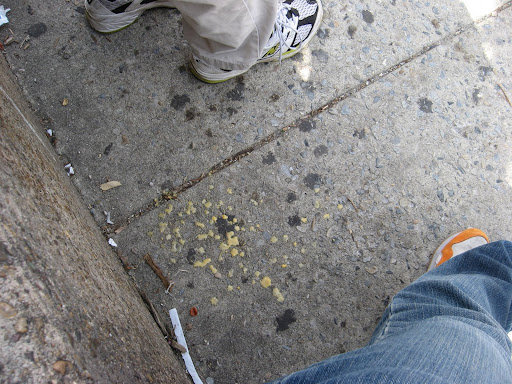 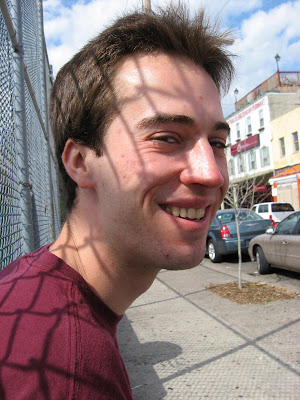 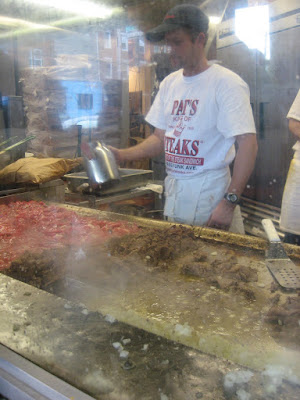 Soon after we finished the first, we crossed the street and placed our order at Geno’s substituting provolone with Cheez Whiz. Although it would have been best to compare apples to apples, I didn’t want to risk another cheesesteak without melted cheese. The folks at Geno’s were slacking because it took 10 whole seconds to produce our sandwich. Unlike Pat’s, our cheesesteak was handed to us wrapped-up in butcher paper. Once again, we headed to the ledge to chow. The major difference between the cheesesteaks is the meat. Pat chops his meat into bits, while Geno slices his thinly. My first thought as I bit into Geno’s sandwich was, “ooh, I really like Cheez Whiz.” My second and third thoughts were, “the onions are perfectly cooked” and “the bread is just like Pat’s.”

On this warm spring day, The Astronomer and I guiltily declared Geno the winner. As good liberals we should have let Pat win, but our tastebuds decided otherwise.

28 thoughts on “Pat's King of Steaks vs. Geno's Steaks”