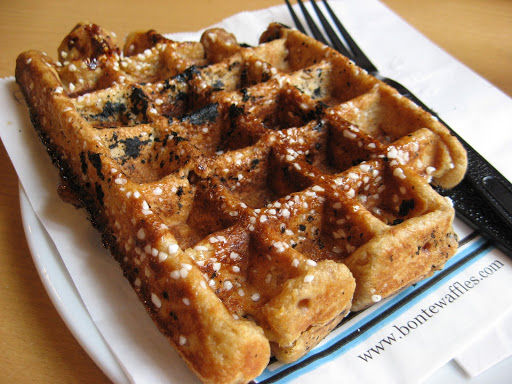 Belgian Sugar Waffles – made fresh, served hot, just like on the streets of Belgium ($2.75)

Bonté currently boasts three locations in Center City on 17th, 13th, and 9th all along Walnut Street. Perhaps the city should consider changing the street’s name to Waffles Street? Now, that would be rad. Since I live on Waffles Street, I walk by Bonté often and would have tried it sooner if their most convenient location on 13th wasn’t always closed when the mood struck.

On our way to the Italian Market one Sunday afternoon, The Astronomer and I took a snack break at the Bonté on 9th. For our inaugural tasting, we chose the plain waffle. White chocolate, dark chocolate, blueberries, bananas, strawberries, and pecans are available mix-in options for an additional sum. 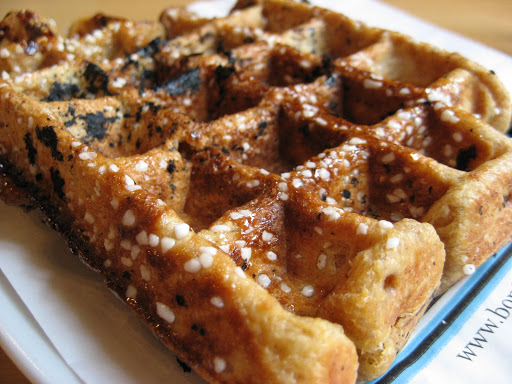 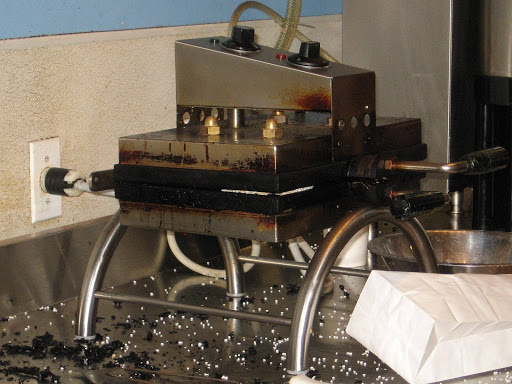 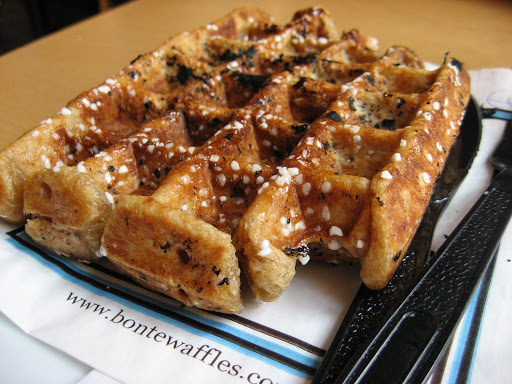 Approximately five minutes after placing our order, a piping hot waffle was brought to our table. It smelled delicious, but the charred spots were somewhat off-putting. One bite and it was obvious that the “authentic” Belgian waffles made at Bonté have little in common with the Belgian waffles we’re accustomed to.

First off, Bonté’s waffles are made from a dough rather than a batter. I peaked behind the counter and saw the waffle artist pressing pre-made dough onto the hot iron, which explains its density and irregular shape. Whereas regular waffles are consumed with maple syrup, Bonté’s have sugar crystals within the dough providing plenty of sweetness and a great crunch. In terms of texture, Bonté’s waffles are stiffer and denser than their fluffy, batter-made counterparts. The interior of Bonté’s waffles is wonderfully flaky.

The waffles cooked up at Bonté are special and delectable. With three ridiculously convenient shops, I’m going to start making Bonté a habit because their waffles sure are tasty.