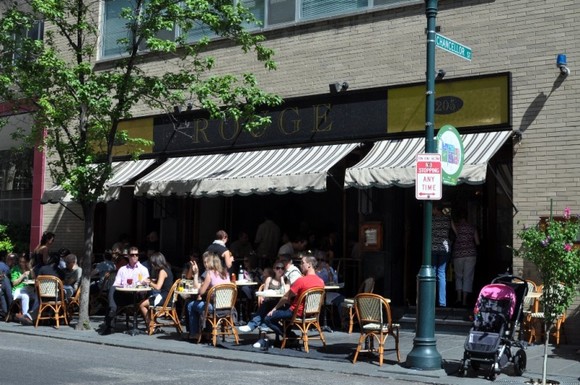 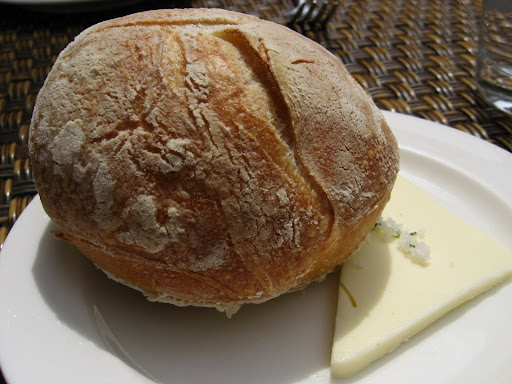 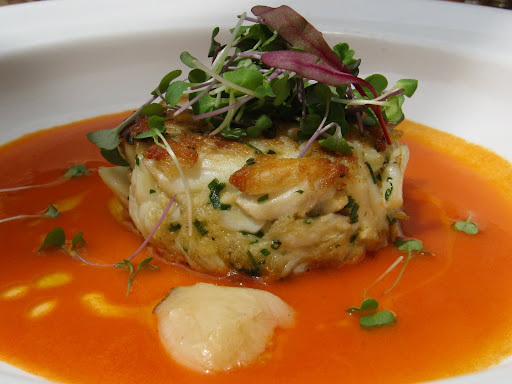 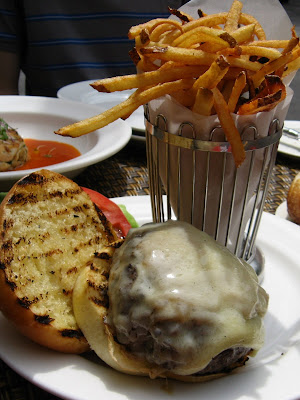 With spring definitely in bloom, my friend James and I met up for a leisurely lunch at Rouge. The weather was perfect so we opted to dine alfresco even though it meant waiting a short while. We landed a table close to 18th Street, which fortunately wasn’t too busy this weekday. Exhaust and eats would have been a terrible combination.

In July 2005, Alan Richman of GQ ranked the Rouge Burger #4 on his list of “The 20 Hamburgers You Must Eat Before You Die.” Glancing at the menu, I quickly settled on the famed burger because I love a well-executed burger and I aim to eventually eat all twenty someday! By the way, Rouge’s neighbor Barclay Prime holds the #3 spot on the list with their Kobe Beef Sliders.

After spying a fellow diner’s Rouge Burger, I decided that it was too hefty for one and chose to split it with James. For our second entree, James picked the Pan Seared Crab Cake. As we waited for our food to arrive, we were brought out delicious rolls with pads of butter sprinkled with coarse salt. The afternoon sun softened the butter nicely, which ensured a smooth spread. 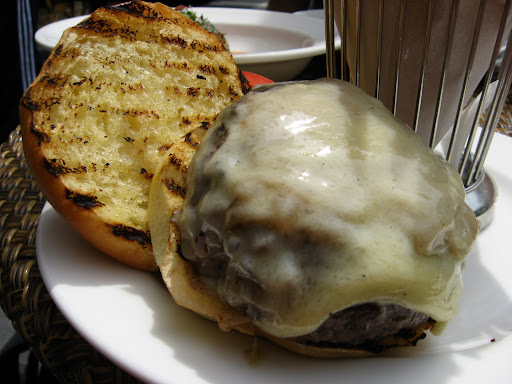 The entrees were brought out simultaneously, but I reached for the burger first because it looked so inviting. One bite and I was in beefy heaven. The meat patty was moist, flavorful, and measured over an inch thick at it’s widest (which James found a little challenging). The brioche bun was flaky, sweet, and bravely held on tight to the enormous patty. The cheese and caramelized onions were great too, but overshadowed by the almighty beef. The burger was so satisfying that I skipped on the ketchup, lettuce, and tomato. Our only complaint was the limp pickle spear.

The frites served with the Rouge Burger reminded James in appearance (not taste) of Boardwalk Fries. Every frite from top to bottom in the conical holder was crisp and salted nicely. In this case, ketchup was in order.

I moved on to the Pan Seared Crab Cake after a couple bites of my burger. The crab cake was petite, lightly packed with chunks of crab meat, and seared ever so slightly. James thought the tastiest parts of the crab cake were more aggressively seared. In hindsight, we should have asked for the crab cake to be delivered as an appetizer because the flavors were far too mild to be eaten side by side with the burger. The fish “soup” was lackluster, but next to the Rouge Burger, what isn’t?