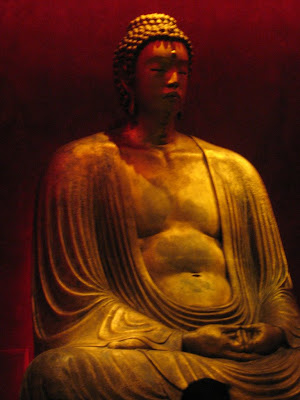 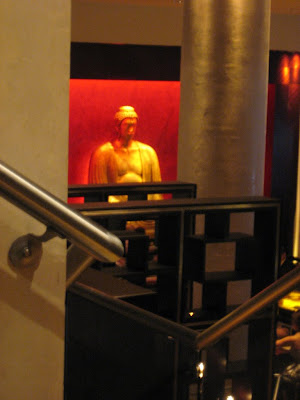 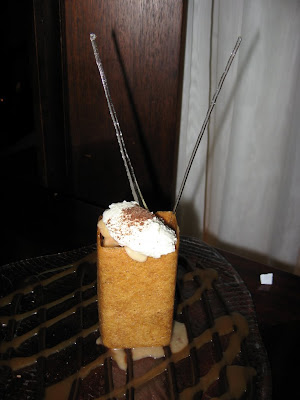 Philly diners either love or hate Steven Starr, but there’s no denying that he is an influential player in the city’s food scene. I have always been an enthusiast of Starr’s restaurants and believe that his venues add value and variety to the dining landscape.

I once read that Starr built his empire around booze and babes, but for a gal who hardly ever drinks and is happily smooching one Astronomer, I enjoy his joints for a simpler reason—Starr and his minions crank out some really good eats. Striped Bass, Alma de Cuba, and Morimoto are all stellar, but Buddakan remains my favorite through and through.

For my last supper in the City of Brotherly love, The Astronomer and I headed to Old City to pay the obnoxious, glowing Buddha one last visit. For a Tuesday evening, the restaurant was packed and loud. In fact, the main dining room was so noisy that we requested a different table from our original seating. We were ultimately placed upstairs in a table next to the one we sat at on New Year’s Eve (!), which made conversation easier on the pipes. 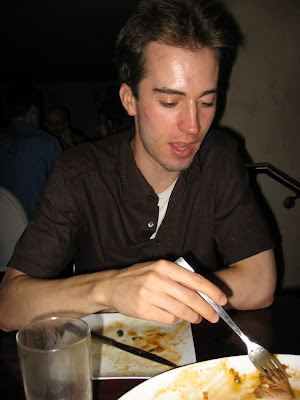 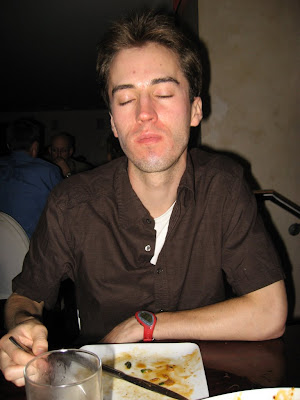 Buddakan’s entrees and desserts have always been right on point, but their appetizers tend to leave me dissatisfied. We asked our waiter for a recommendation and he suggested we try the Crispy Calamari Salad. A small order of the salad was humongous and composed of five different types of greens including Napa cabbage, bok choy, and watercress. The salad was topped with a sweet miso dressing that complemented the greens and calamari wonderfully. The salad was cool, refreshing, and a great start to our dinner.

For our entrees, The Astronomer and I ordered our two favorite dishes, the Grilled Teriyaki Salmon and Asian Barbecue Pork. I requested the salmon be prepared rare and it came out just as I asked, which kept the meat tender yet flakey. The cream cheese and arugula sushi rolls were amazing (as always) and were my favorite part of the dish. Although the combination of ingredients inside the sushi may sound a bit strange, trust me when I say that the flavors really meld nicely together.

The pork dish was also delectable, especially the gigantic panko crusted onion rings. The pork tenderloin was thinly sliced, served in a hoisin based sauce, and arranged beautifully on the platter. The meat was moist and paired well with the sautéed Chinese broccoli. The Astronomer loves eating his greens when they’re covered in a delicious glaze. 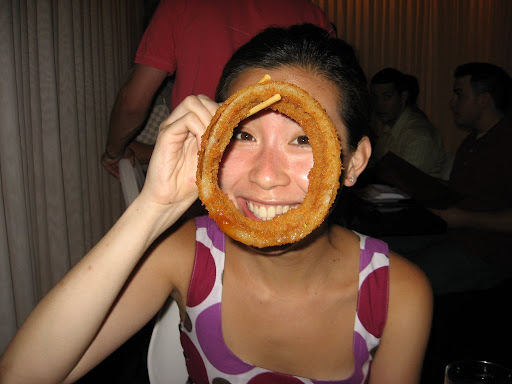 For dessert we each ordered our own delight because The Astronomer dislikes bananas and I had to have a Banana Tower. I enjoyed a Banana Tower once prior with my brother but haven’t ordered it for a long while due to The Astronomer’s aversion. While I would normally insist on splitting dessert, since it was our final dinner in the city, splurging on two was totally acceptable.

The Tower combines two of my favorite ingredients—bananas and caramel—in a thick and buttery cookie. I enjoyed demolishing the cookie Tower and coupling it with the caramel pudding and ripe bananas. It’s amazingly easy to finish a dessert solo when it’s this divine.

The Astronomer enjoyed his donuts thoroughly and had a look of utter bliss on his face as he ate them. The donuts appeared to be a lot bigger than the ones served in the past, but The Astronomer managed to finish them with ease. The blackberry and ginger cream cheese were his favorite accompaniments.

Our dinner at Buddakan was unbelievably marvelous and provided the perfect ending to our Philadelphia adventure. Peace, Philly.

One thought on “Buddakan – Philadelphia”