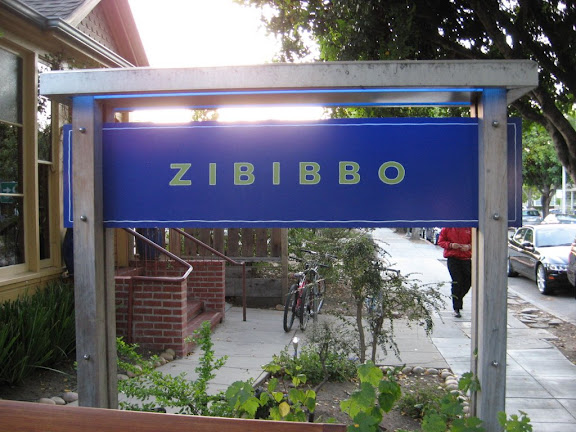 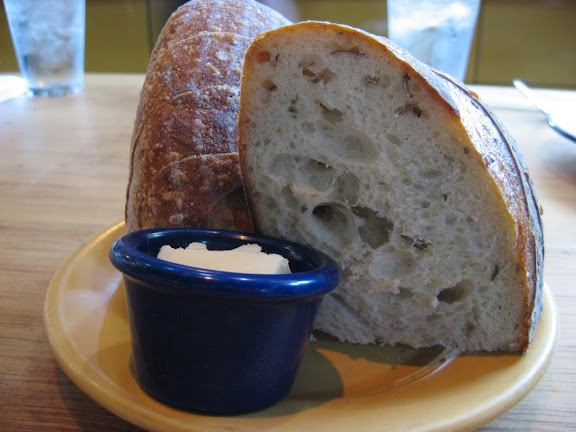 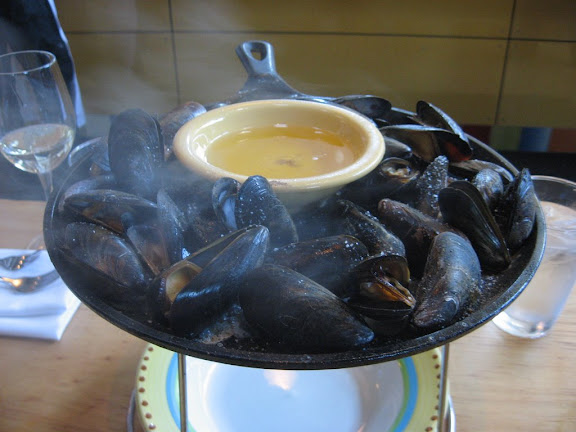 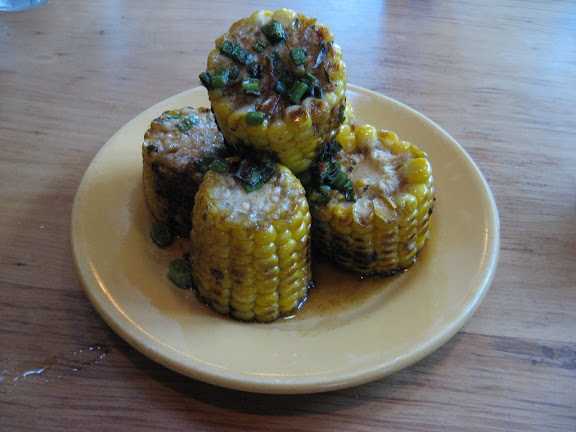 Roasted Corn on the Cob with Rosemary Harissa Butter ($5) 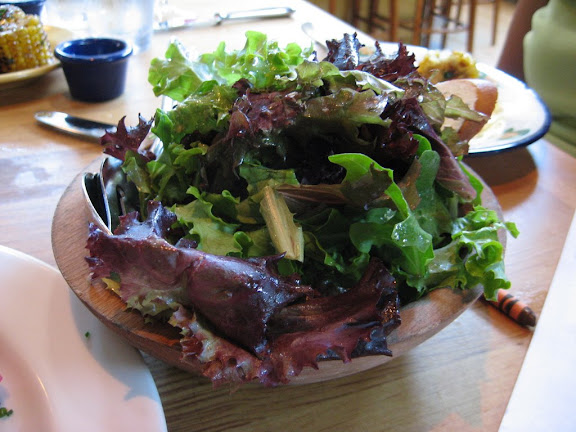 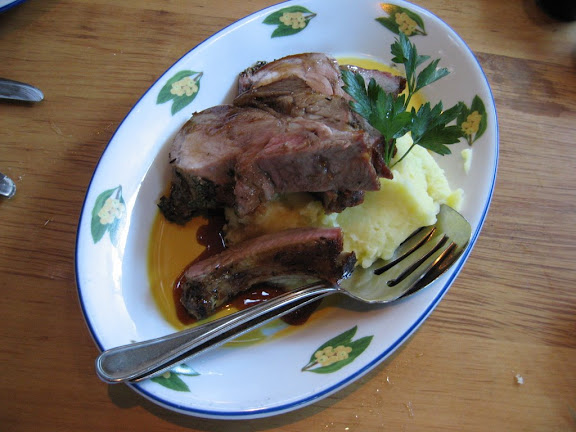 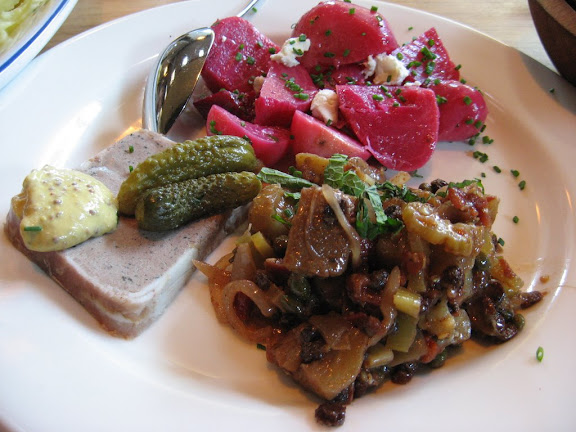 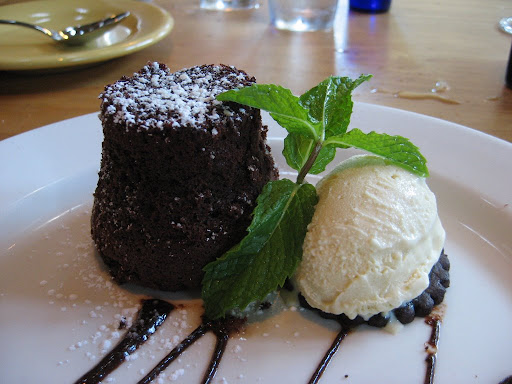 Before jetting off to Vietnam, I’m spending a month in California with my family. Hopefully after thirty days with me, they’ll miss me a little less when I’m gone. The weather has been unbeatable and I’m learning a lot about Vietnamese cooking from my grandma—hence the increased number of Vietnamese recipes on the site as of late. There’s a whole lot more to come!

On a recent weekend, I flew to the The Bay to spend time with my favorite aunt Thao, Uncle Brian, and Cousins Megan and Madison. The weather up north is too cool and breezy for me, but the company and food were absolute perfection. On the first evening of my visit, we drove to Palo Alto to dine at Zibibbo, which was named one of the 20 best American restaurants by the readers of Gourmet. Zibibbo’s website touts:

Palo Alto’s Zibibbo offers an inventive pan-Mediterranean menu that changes with the seasons in the tranquil surroundings of a renovated Victorian home. Its compass ranges from the Pillars of Hercules to the Golden Horn, offering foods from Spain, Morocco, Greece and Italy in addition to the Provençal-inspired dishes made famous by sister property Restaurant LuLu in San Francisco.

My aunt chose Zibibbo because she had a great experience on a previous visit with some friends. The restaurant’s space is roomy, well-lit, and has a lovely open kitchen complete with a rotisserie and coal oven. The laid back and classy vibe embodied the spirit of the cuisine.

We started with some complimentary potato and rosemary bread. The bread had a crusty exterior and mild flavor that leaned more toward potato than rosemary. The butter was rich and spread-able. Both my aunt and uncle enjoyed the bread and butter immensely.

At the suggestion of my aunt, my uncle and I shared the Iron Skillet Roasted Mussels with Lemon-Herb Butter for our appetizer. This was my first encounter with mussels not prepared in a white wine or tomato broth. The skillet preparations unleashed a smoky flavor on to the au naturale mussels and created a dry dish overall. The butter did not contain strong lemon and herb flavor and as a result, the dish was one dimensional. 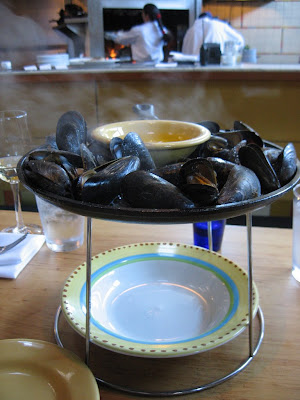 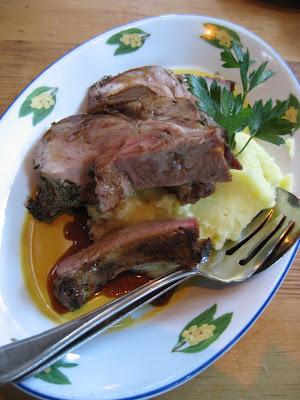 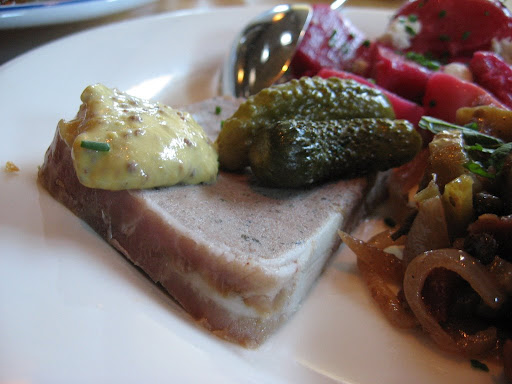 My aunt created a vegetarian small plates experience by ordering the Roasted Corn on the Cob with Rosemary Harissa Butter and Baby Mixed Greens with Herb Goat Cheese Crouton and Mustard Vinaigrette for her “entrée”. The corn was generously buttered, delightfully robust, and crisp to the bite. I haven’t had corn this good since my trip to Iowa years ago. My aunt really enjoyed this selection and couldn’t stop raving about it during and after the meal. The mixed greens salad was fresh, but average. I didn’t get a bite of the crouton, but my aunt thought the goat cheese was too strong, while my uncle liked it quite a bit.

In the sharing mood, my uncle and I split the Pomegranate Molasses Glazed Pork Loin with Olive Oil Mashed Potatoes for our entrée. The portions at Zibibbo are intentionally humongous to encourage family style eating. The pork loin lacked a distinct pomegranate and molasses flavor, but was a true standout regardless. The cuts of pork were moist and fatty in all the right places. The mashed potatoes were smooth, creamy, and worked well with the pork.

In addition to the pork loin, my uncle and I also shared an antipasti plate. I chose the Roasted Baby Beets with Fresh Goat Cheese and Eggplant Caponata with Currants and Mint, while my uncle selected the Pork Pate with Grain Mustard and Cornichons. The beets were simply prepared and a feast for the eyes and mouth. My aunt and uncle were not fans of the beets, so I ate the majority of them. The eggplant was sweet and refreshing due to the mint, but needed a vehicle of some sort, perhaps some crostini, to enhance the flavors. My uncle consumed most of the pate because I didn’t care much for it. He said the pate reminded him of the pate he enjoyed on a recent trip to Paris with my aunt.

My cousin Megan selected the Chocolate Cake with Caramel Ice Cream for dessert and devoured the bulk of it. The cake contained a molten center and was intensely chocolaty, but not too bitter for Megan’s sensitive palate. The caramel flavor in the ice cream was lacking, but Megan didn’t seem to mind because she ate every last drop.