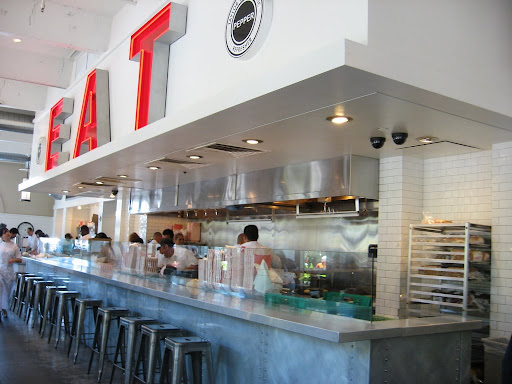 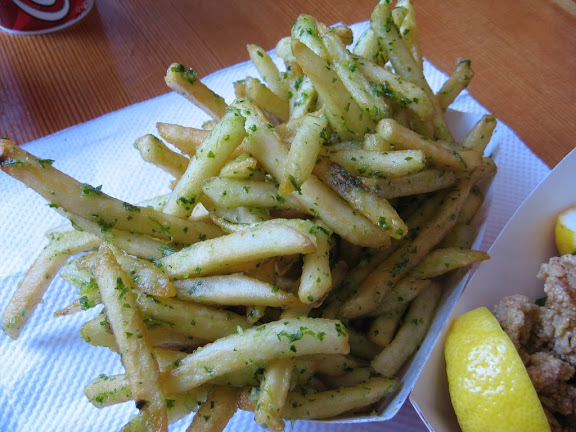 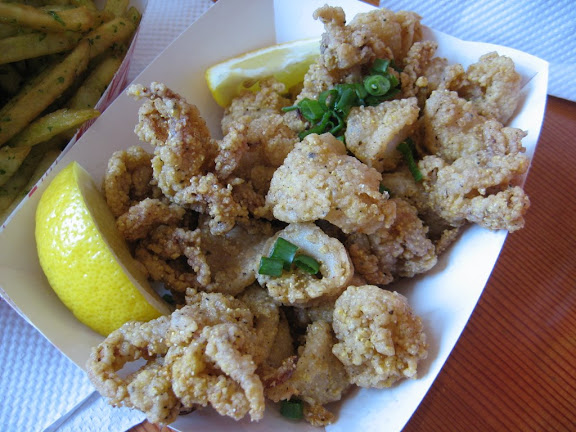 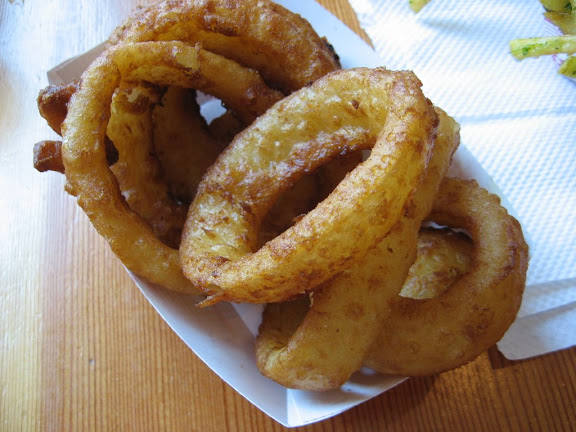 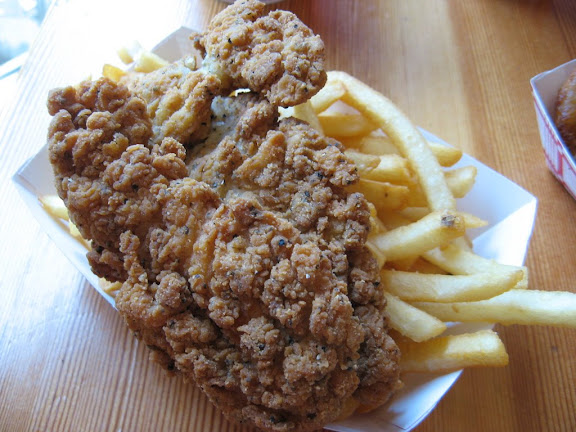 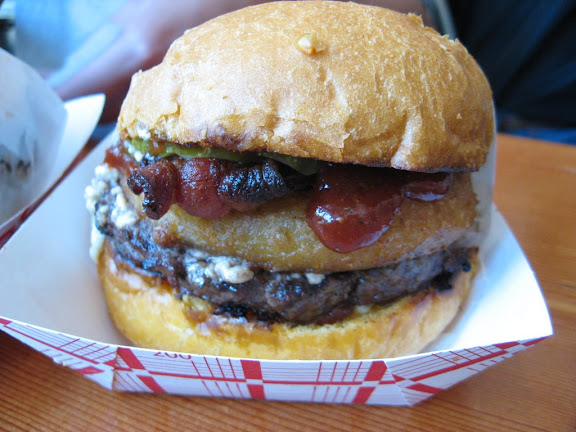 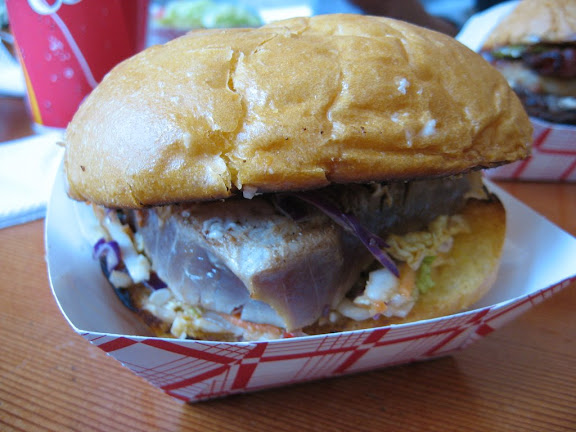 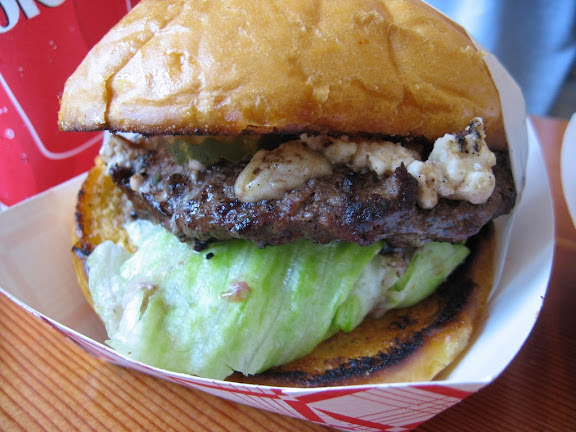 A trip to The Bay just wouldn’t be complete without visiting the Ferry Building. The Astronomer and I had a ball there last spring pursuing the shops and sampling a plethora of gourmet goodness. Even though my aunt and uncle reside only a short drive from the Ferry Building, this was their first trip to the gastronomic Mecca. Since we were in the neighborhood, we picked up Cousin Timmy at SFSU to join us for lunch.

During my previous visit to the Ferry Building, The Astronomer and I constructed a multi-course lunch from a number of different vendors. This time, the majority of my family was in the mood for Taylor’s Automatic Refresher, so I figured it would be best to join them rather than venturing on my own. You know how it is in big groups…

I ordered the Ahi Burger, which was the priciest item on the menu. The seared tuna’s flesh was pleasantly pink and a refreshing alternative to a standard beef patty. I’ve consumed a lot of seared tuna in my days, but never in between two pieces of bread so I was pleasantly surprised by how well the combination worked. The slaw was crisp and dressed in a soy vinaigrette, while the ginger and wasabi mayonnaise was relatively mild. All of Taylor’s burgers are served on a toasted egg bun, which was terrific. Overall a solid burger, but perhaps priced a bit too high. 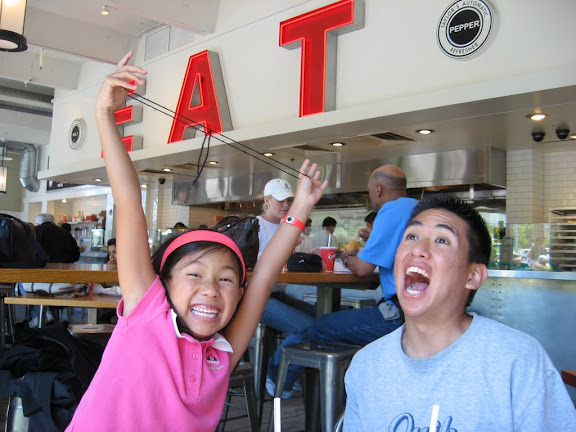 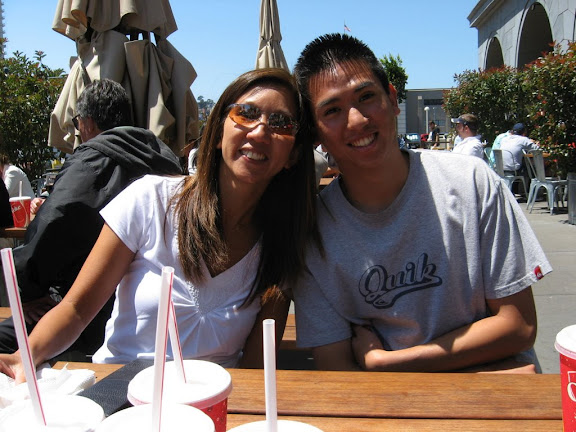 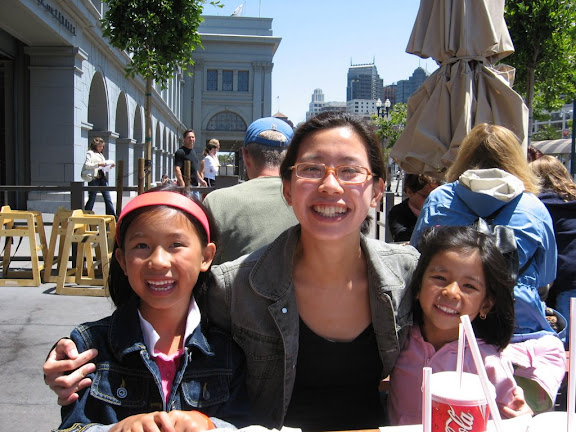 Uncle Brian enjoyed his Western Bacon Blue Ring enormously. The one bite I had was really great—the onion ring and BBQ sauce hit all the right flavors and textures. The burger reminded me of the ones served up at Carl’s Junior, but much more satisfying and dramatically less messy. Cousin Timmy ordered the Blue Cheese Burger, which he liked, but I didn’t get the impression that it blew him away. Cousins Megan and Madison both ate Chicken Fingers (surprise, surprise). The honey mustard sauce that accompanied the fingers was sweet, tangy, and so downright delectable that I had to dip everything in sight.

The table shared an order of garlic fries, calamari, and onion rings, which were all very good. My favorite was the onion rings, which were spectacular with ketchup. My uncle didn’t care much for the onion rings because the batter wasn’t crunchy enough for his tastes. Rather than serving neat little rings of calamari like most restaurants do, Taylor’s served up squid heads! The calamari was well-seasoned and softer than I expected. I’m not too big on fries, but the garlic fries held their own.

I’ve said it before and I’ll say it again, I am definitely a fan of high-end renditions of classic American junk food.