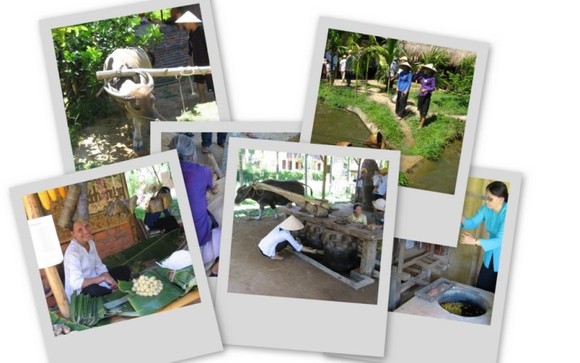 Staff retreats stateside and in Vietnam have two things in common—ridiculous amounts of food and not so much productivity.

On the road from Da Nang to Hoi An, the site of the retreat, the entire East Meets West staff (80+ people) stopped at the Vietnam Village Resort for a cultural experience and lunch.

The Vietnam Village Resort is a Vietnamese version of Colonial Williamsburg, but instead of observing butter churning demonstrations and visiting the shoemaker, we saw silk being spun from cocoons (!) and learned the art of making banh chung. Although I usually shun tourist traps, the exhibits were so interesting that I couldn’t help being a fan. I was particularly fascinated by the sugaring demo, which transformed sugar cane into raw sugar. The Astronomer had a more hands-on experience and learned how to make banh cuon. We had a blast. 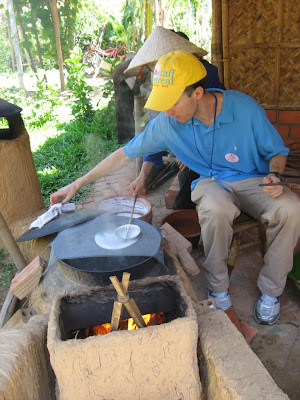 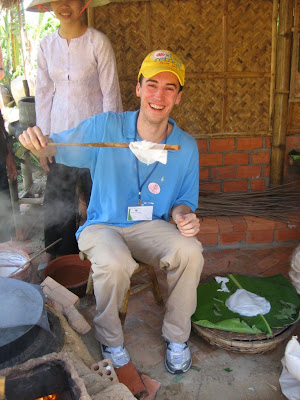 After perusing the food and craft stalls for an hour or so, we sat down for a multi-course lunch prepared by the Village staff. We started off with three appetizers: banh dap, banh beo, and banh nam. 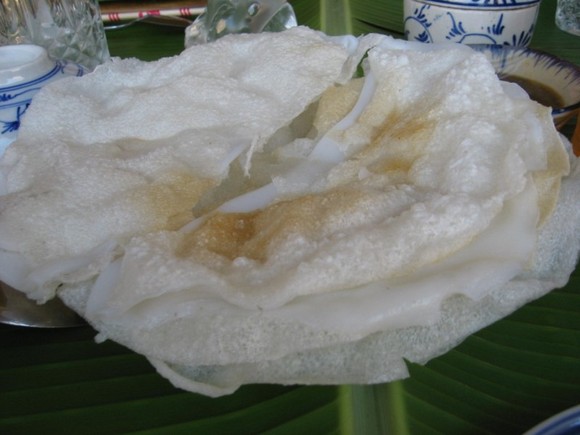 This was my first time trying banh dap, which is banh cuon (tender rice flour crepes) laid atop a crispy rice cracker, broken in half, and eaten with fish sauce. Dap means to hit/slap in Vietnamese, which is what one does to break the banh in half. I found banh dap a little bland, but enjoyed the texture. A little Internet research has revealed that some versions of banh dap are made with scallions and meats; I’m sure those preparations are much more desirable. 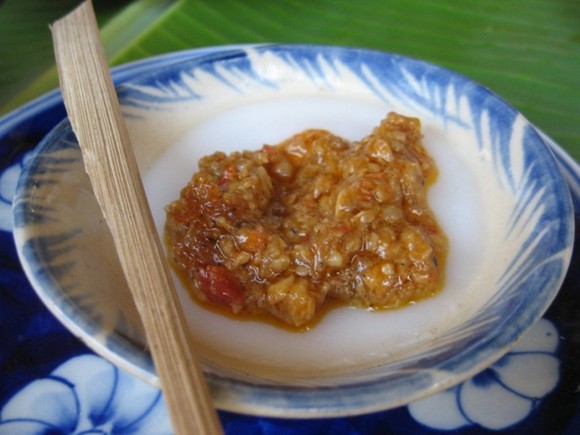 The banh beo was very unique in that it was portioned in a small dish, topped with a salty shrimp paste, and eaten with a wooden stick. The banh beo I’m familiar with is arranged overlapping on a plate, topped with mung bean paste, sautéed scallions, dried shrimp, and sweet fish sauce, and eaten with chopsticks. The Village’s version was alright, but I prefer the one I’m used to. 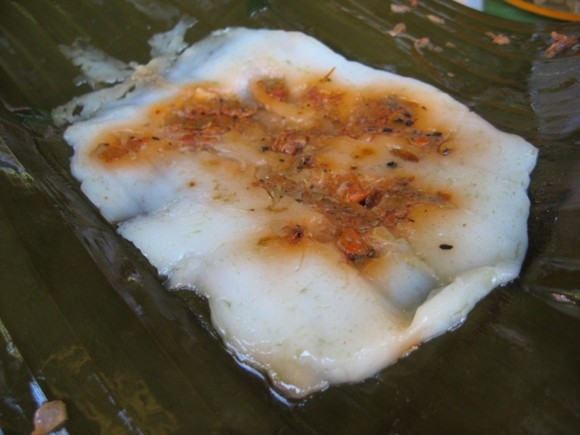 The banh nam was very well prepared; everything tastes better wrapped up in banana leaves! 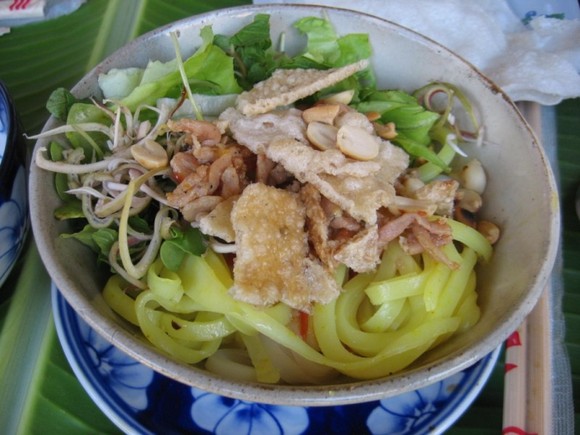 Next came an intermezzo course of my quang, which was far from amazing. The dish tasted like it was thrown together and the flavors didn’t meld at all. Preparing a meal for a large group is tough and the noodles really suffered as a result. Following the my quang, we enjoyed a number of dishes with rice. 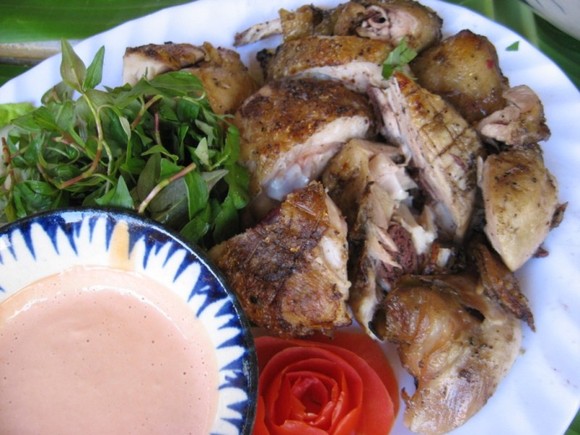 I didn’t have any of the chicken, but my table ate it up. 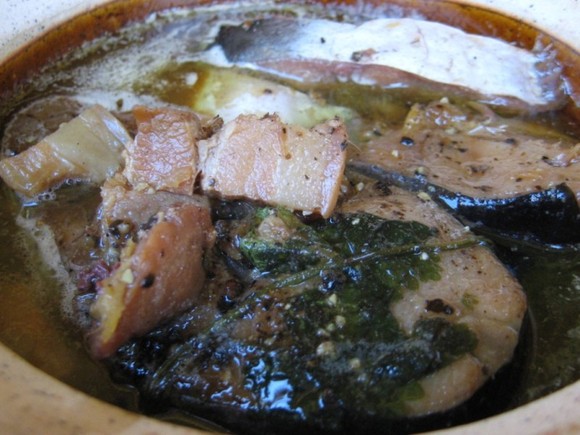 The braised fish was wonderfully marinated and my favorite course of the afternoon. 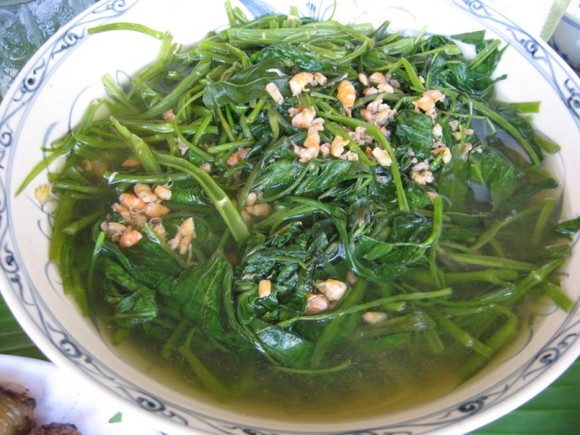 The water spinach and shrimp soup provided a good source of greens, but was nothing special. 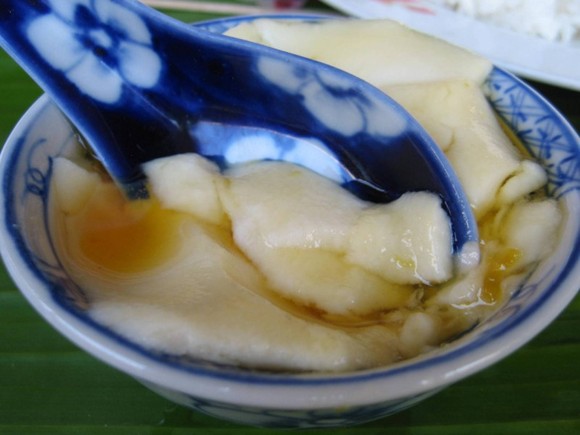 For dessert we were served sweet tofu in a ginger syrup, which rocked my world so much that I ate three bowls. There’s just something about the tofu’s delicate texture mixed with the sweet and spicy syrup that I clearly can’t resist.