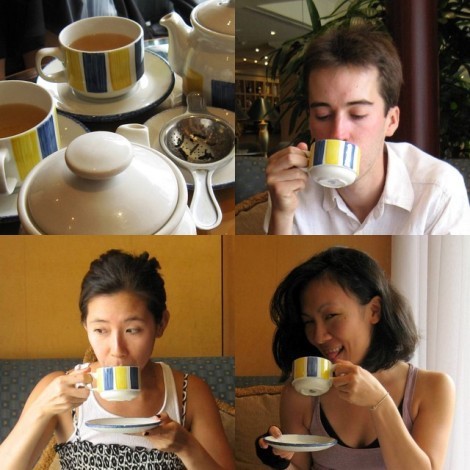 Sure, I love street food. But I also love luxurious indulgences. After all, variety is the spice of life.

I’ve been aching to attend tea at one of the posh hotels in town for quite some time. Lush’s visit provided a fine occasion to sip and nibble the afternoon away. We checked out the menus at the Park Hyatt and the Sheraton, but settled on the Caravelle because they offered both a traditional English bill of fare and a Vietnamese one. 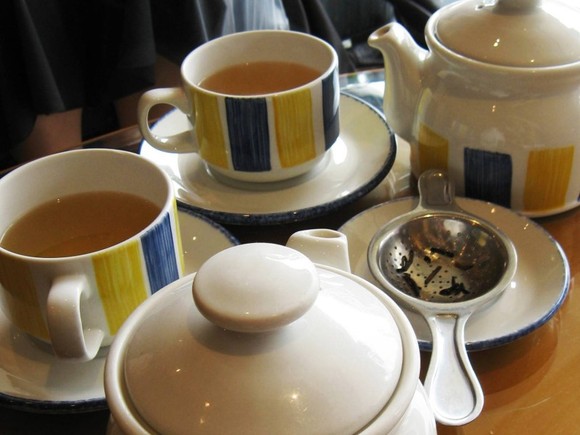 I started the afternoon off with a hefty glass of Vietnamese coffee, while The Astronomer ordered peppermint tea and Lush had a lotus brew. Even though the coffee was insanely good and strong, I later regretted my decision to veer from tea due to the onslaught of sweets to come. The peppermint tea was a crowd pleaser, while the lotus was too bitter for all of us. 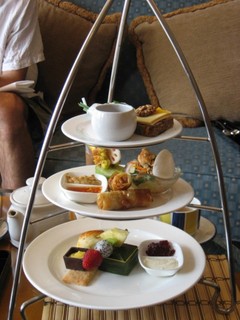 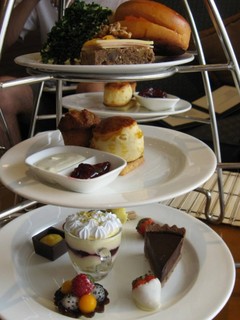 Our savories and sweets were served on three-tiered, stainless steel presentation pieces that were imposing upon our modest coffee table, yet awe inspiring. In fact, onlookers from inside and outside the hotel gawked at the structures. 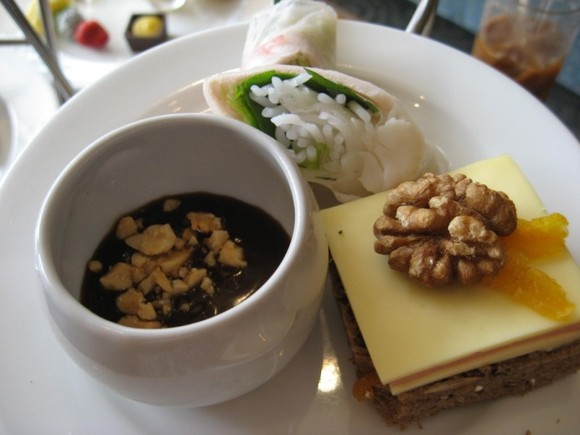 The Astronomer couldn’t stand a day without Vietnamese food and went for the “Lotus” offerings. The top tier included an open-faced sandwich with cheddar cheese, apricots, walnuts and smoked ham, and spring rolls with hoisin sauce. The spring rolls did not stray far from traditional goi coun, while the sandwich was simple and dainty. After months without whole grain breads and cheeses other than Laughing Cow, the open-faced sandwich made The Astronomer and I a little giddy. 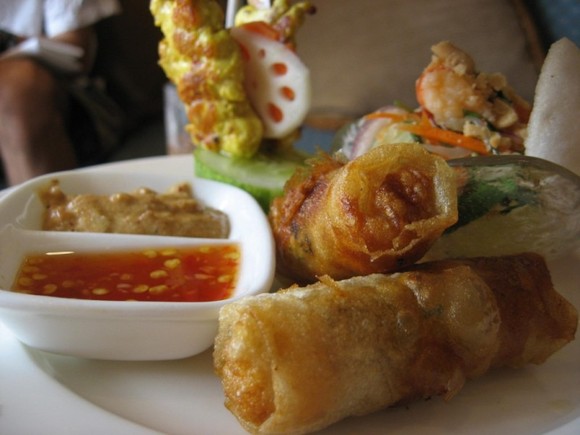 The second tier included two crab meat and pork eggrolls with a chili dipping sauce, chicken satay with peanut sauce and a pomelo salad served with shrimp chips. I was definitely in the mood for English fare and found the Vietnamese offerings fairly run of the mill. The eggrolls were the usual, as was the pomelo salad. The chicken satay with peanut sauce was a nice departure from the traditional Vietnamese food on hand. The Astronomer enjoyed each of the items because his heart bleeds fish sauce. 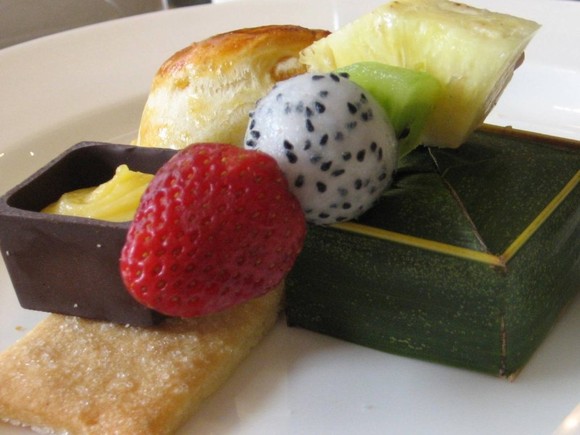 The desserts on the Lotus menu were not nearly as extensive as the traditional one, but offered good variety. A shortbread cookie, raisin scone, fresh fruit skewer, chocolate filled with lemon curd and “Vietnamese traditional pudding in banana leaf” rounded out the selections. The curious “pudding” turned out to be a gelatinous coconut cake infused with jasmine. The Astronomer and I did not care too much for it, but Lush was a fan. With the exception of the pudding, everything on the Lotus dessert plate was offered on the English menu and will be assessed below. 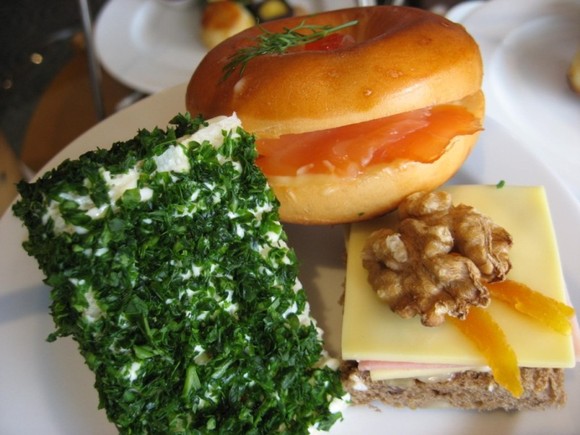 The top tier of my English offerings included a smoked salmon bagel sandwich accented with dill and salmon roe, a cucumber and tomato sandwich, and the same open-faced sandwich as above. The cucumber and tomato sandwich was dusted in parsley and perfect for the occasion. Tea just isn’t quite tea without a crust-less triangular sandwich made from white bread. The salmon number was my favorite. I took my sweet time eating it, savoring each smoky bite. Oh, how I love the salty pop of salmon roe! 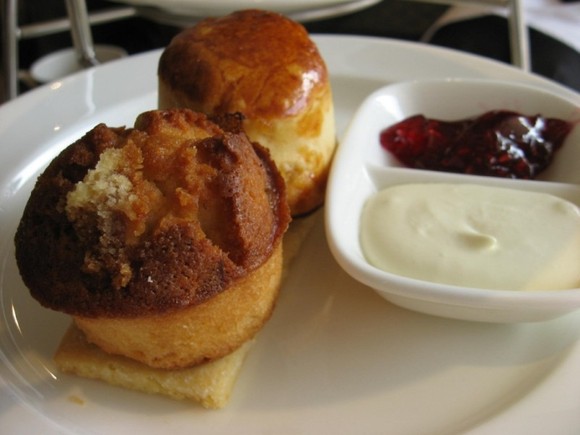 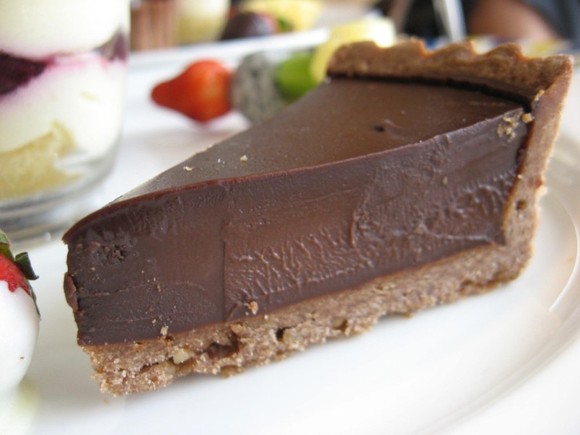 The richest dessert was the bittersweet chocolate tart. The velvety interior was contained by a crumbly and buttery crust. I maxed out at three bites, and had to share the rest with The Astronomer. Lush, a chocoholic if you will, couldn’t finish hers either. I guess some desserts are just too intense. 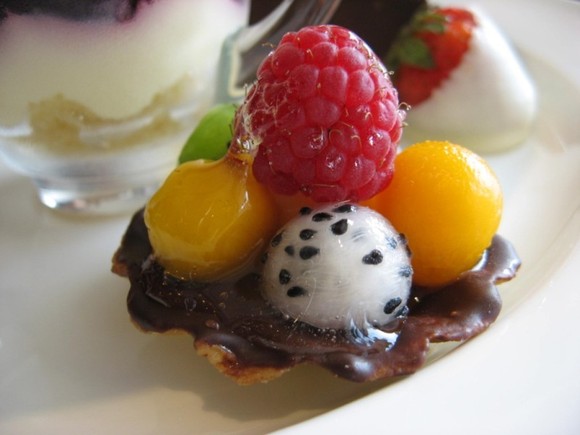 My favorite dessert of the afternoon was the fruit tartlet. Bite-sized orbs of mango, dragon fruit kiwi and raspberry rested atop a thin, golden crust painted with chocolate and filled with vanilla cream. The entire tartlet was glazed in a simple syrup until the fruits gleaned. Sweet, tart, creamy, chocolaty goodness! I could have eaten a couple more of these. 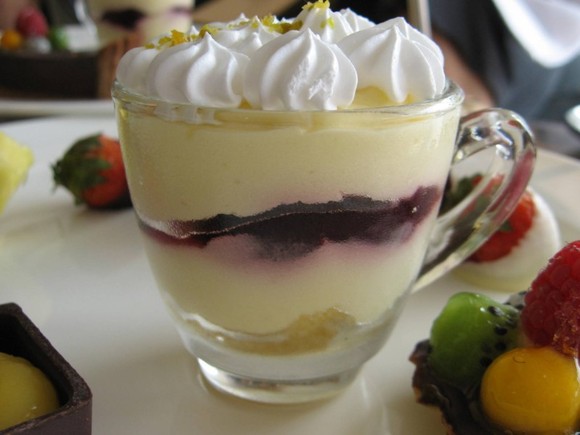 The British vanilla and cherry trifle was another highlight of the dessert offerings. The creamy custard and whipped cream coupled with the tart cherries and liquor-laced cake left Lush and I yearning for more. The bottom layer of rum-soaked pound cake was my favorite because I am a pirate. 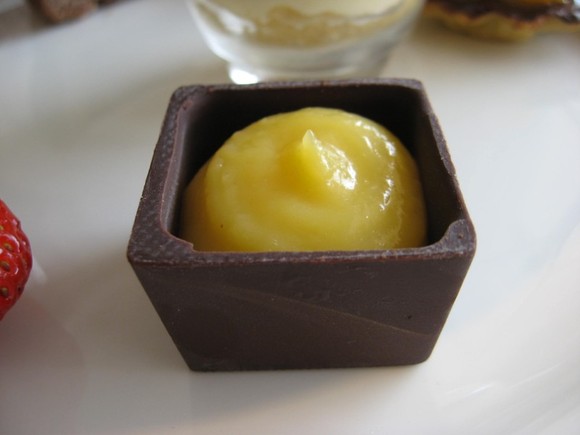 The chocolate box filled with lemon curd was one of The Astronomer’s favorite desserts. As the chocolate box entered our mouths, it effortlessly collapsed, combining smoothly with the lemon curd. While we’ve all had chocolate and fruit paired together numerous times, we had never experienced it with lemons. Lemons and chocolate are indeed a good team. 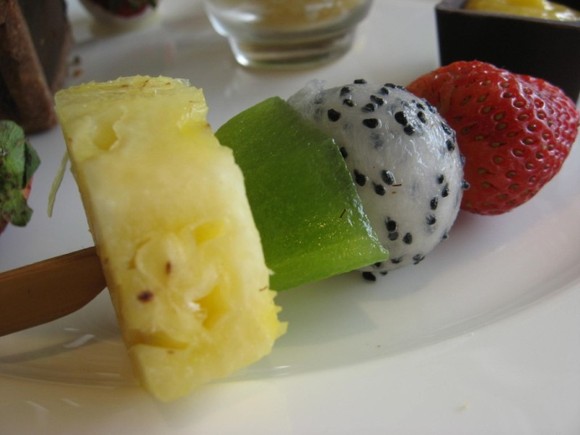 The selection of fruits balanced out the overwhelming sweetness of some of the desserts. In addition to the fresh fruit skewer, the English menu also included white and milk chocolate-dipped strawberries!

My first experience with afternoon tea was truly stupendous! Speaking with a faux-British accent and pretending to be lady-like, all while munching on obscenely cute food was a dream. Must do it again soon!

5 thoughts on “Afternoon Tea at the Caravelle Hotel”