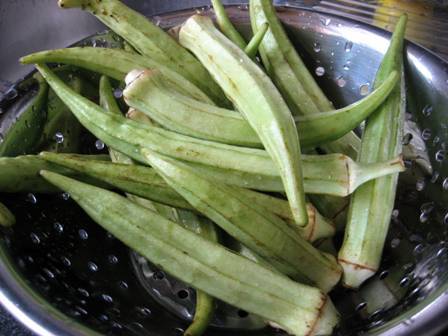 Okra (American English: [ˈoʊkɹə], British English [ˈəʊkɹə], [ˈɒkɹə]), also known as lady’s finger, bhindi (Hindustani) and gumbo, is a flowering plant in the mallow family (along with such species as cotton and cocoa) valued for its edible green fruits. Its scientific name is Abelmoschus esculentus.

The species is an annual or perennial, growing to 2 m tall. The leaves are 10–20 cm long and broad, palmately lobed with 5–7 lobes. The flowers are 4–8 cm diameter, with five white to yellow petals, often with a red or purple spot at the base of each petal. The fruit is a capsule up to 18 cm long, containing numerous seeds.

The species apparently originated in the Ethiopian Highlands, though the manner of distribution from there is undocumented. The Egyptians and Moors of the 12th and 13th centuries used the Arab word for the plant, suggesting that it had come from the east. The plant may thus have been taken across the Red Sea or the Bab-el-Mandeb strait to the Arabian Peninsula, rather than north across the Sahara. One of the earliest accounts is by a Spanish Moor who visited Egypt in 1216, who described the plant under cultivation by the locals who ate the tender, young pods with meal.

From Arabia, the plant spread around the shores of the Mediterranean Sea and eastward. The lack of a word for okra in the ancient languages of India suggests that it arrived there in the Common Era. The plant was introduced to the Americas by ships plying the Atlantic slave trade by 1658, when its presence was recorded in Brazil. It was further documented in Suriname in 1686. Okra may have been introduced to the southeastern North America in the early 18th century and gradually spread. It was being grown as far north as Philadelphia by 1748, while Thomas Jefferson noted that it was well established in Virginia by 1781. It was commonplace throughout the southern United States by 1800 and the first mention of different cultivars was in 1806.

Until I moved to Saigon, I never knew that okra or đậu bắp made an appearance in Vietnamese cuisine. I always associated the vegetable with southern specialties like gumbo.

In Vietnam, đậu bắp is most commonly found in a soup called canh chua alongside pineapples, tomatoes, and upright elephant ears (bac ha). I’ve also encountered it sauteed and served as a side dish at restaurants specializing in broken rice and paired with raw meets at DIY grilling eateries.

In my experience with Vietnamese-American home cooking and restaurant fare, đậu bắp is pretty much non-existent. Is it just me or has đậu bắp lost its importance in Vietnamese food abroad?