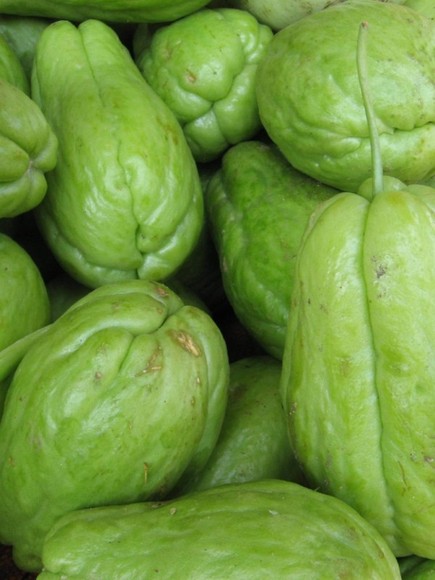 The chayote (Sechium edule), also known as choko, chocho, chow-chow, christophine or merliton, is an edible plant that belongs to the gourd family Cucurbitaceae along with melons, cucumbers and squash.

In the most common variety, the fruit is roughly pear or apple shaped, somewhat flattened and with coarse wrinkles, ranging from 10 to 20 cm in length. It has a thin green skin fused with the white flesh, and a single large flattened pip. The flesh has a fairly bland taste, and a texture described as a cross between a potato and a cucumber. Although generally discarded, the seed has a nutty flavor and may be eaten as part of the fruit.

Although most people are familiar only with the fruit, the root, stem, seeds, and leaves are all edible.

The fruit does not need to be peeled and can be eaten raw in salads. It can also be boiled, stuffed, mashed, baked, fried, or pickled. Both the fruit and the seed are rich in amino acids and vitamin C.

The tuberous part of the root is starchy and is both eaten by humans and used as cattle fodder.

The leaves and fruit have diuretic, cardiovascular and anti-inflammatory properties, and a tea made from the leaves has been used in the treatment of arteriosclerosis and hypertension, and to dissolve kidney stones.

Truth of the matter is, I don’t have much experience with chayote or trai su su as they are called in Vietnamese. The Astronomer, Nina and I recently ate some julienned stir-fried chaoyte at a restaurant specializing in Sapa cuisine. My grandma makes a similarly simple stir-fry using bits of minced pork and shrimp and of course, fish sauce. Other than these two dishes, I’m all tapped out of Vietnamese culinary uses.

In terms of western eats, my good friends at Epicurious.com have some very intriguing uses for chayote including recipes for chayote and hearts of palm salad, chayote soup with lemongrass and ginger, sauteed chayote with garlic and herbs and creamed chayote with chives!

My, my these little guys are versatile. How do you like your chayote? With a coyote?