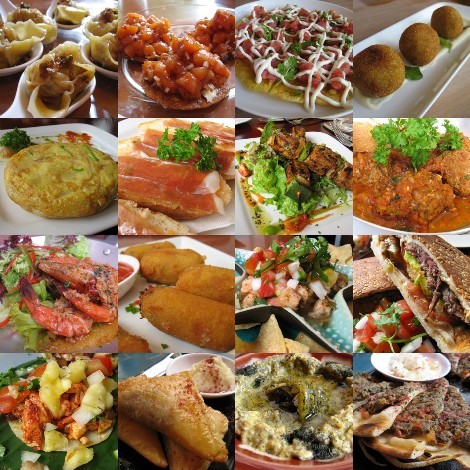 Communal nibbling is a tradition in many cuisines. Spaniards have their tapas, the Cantonese consume their dim sum, Greeks celebrate their mezze and the Japanese feast on sakana at izakaya bars. Cathy Danh checks out the big business of small plates in HCM City.

It used to be that going out for a meal meant ordering appetizers to start, which were then followed by entrees (usually a slab of protein paired with a carbohydrate and starch) and if there was any room left, dessert proceeded. Taking a cue from the global small plates trend, a number of popular establishments in town are deconstructing their menus. Appetizers, entrees and desserts are still present in some form, but the addition of small plates (or tapas as they are more popularly referred to) is notable.

HCM City’s chefs are adding an unexpected twist to this trend by rethinking and transforming cuisines not traditionally served in this fashion. Mexican, Cuban and Vietnamese foods are being given a modern makeover and becoming major players in the emerging small plates scene. Light bites, big groups and stiff drinks are the name of the game, and the city is packed with dining options that fit the bill. 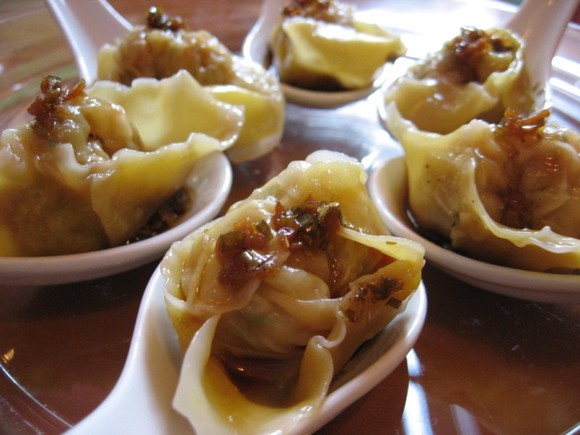 Qing
31 Dong Du, District 1
Qing has the honour of being the city’s first small plates joint. “When I looked at what was around Dong Du, there was already a Vietnamese restaurant and Al Frescos,” says Tony Fox of Qing. “We wanted to do something different and decided on tapas with a twist—Asian tapas.” Qing opened its doors in December of 2004 and has been doing brisk business ever since. Even though the menu includes traditional entrees and appetizers, “70% of our customers order wine and tapas,” says Fox. “It’s all about small bites and big flavours.” The Korean-spiced salmon with kimchi blinis and wasabi cream cheese (68,000 VND) are a crowd favourite. The delicate pieces of diced fish are placed atop a crispy pancake smeared with spicy cream cheese. The prawn wontons with ginger and spring onion dressing (75,000 VND) are also stellar. Each dumpling is daintily served on a porcelain spoon, and the combination of flavours are reminiscent of traditional dim sum. 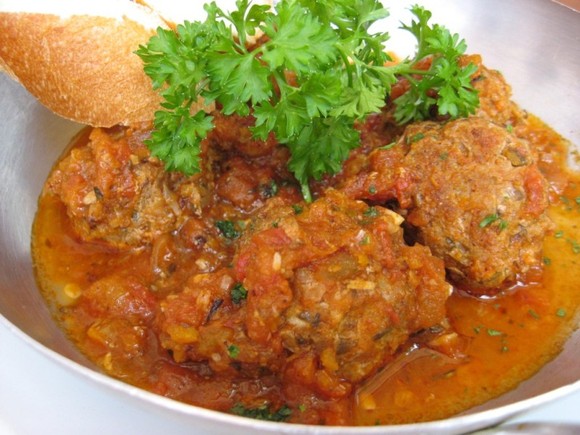 La Habana
6 Cao Ba Quat, District 1
With over 50 delectable Spanish and Cuban-inspired tapas on the menu, live music and dancing nearly every night of the week and cocktails sold by the pitcher, La Habana is guaranteed to be a great night out. “Tapas and paellas are our signature specialties,” says Jane Speeger of La Habana. The Cuban meatballs (60,000 VND) in tomato sauce are hearty, rustic and satisfying, especially atop toasted slices of bread. The chilli garlic prawns (60,000 VND) garnished with a fresh spring mix are juicy, succulent and will leave you wanting more. The croquetas filled with mushroom, cheese and ham are served with a chilli pineapple sauce (60,000) to create an unstoppable combination of flavours. Every Monday at La Habana is a Tapas Fiesta where diners have a choice of three tapas for 150,000 VND. Add 30,000 VND for a glass of house wine. 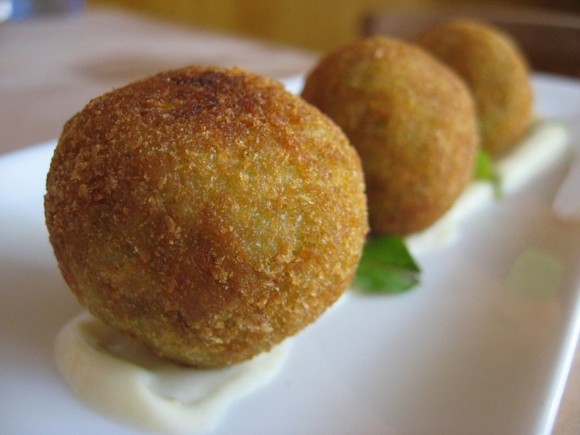 Xu Café Bar
71-75 Hai Ba Trung, District 1
The Xu restaurant empire is taking a stab at small plates at the café bar on the first floor of their flagship establishment. A varied selection of modern “Vietnamese tapas” share menu space with an extensive wine and cocktails list. According to Elizabeth Fisher of Xu, the concept for the café bar was to keep food light and informal. “The menu provides something to snack on while drinking,” says Fisher. “If people want a full dining experience, then they can go upstairs to Xu Restaurant.” One of the best-selling tapas is the Vietnamese Pizza (60,000 VND). The base of this fusion dish is a cross between a Vietnamese crepe and a tostada shell. Squares of rare tuna and a smattering of cilantro are piled on top, and a chilli and lime dressing provides the finishing touch. “We’re taking traditional Vietnamese herbs and spices and giving it new style with our tapas menu,” says Fisher. A fine example of this blending is the Rau Ram Arancine (60,000 VND). The fried risotto balls combine the heartiness of Italian risotto with Vietnamese coriander. With the Vietnamese tapas menu receiving rave reviews from customers, the folks at Xu are now working to bring late night acts to the venue. “We want people to eat, drink and be entertained,” says Fisher. 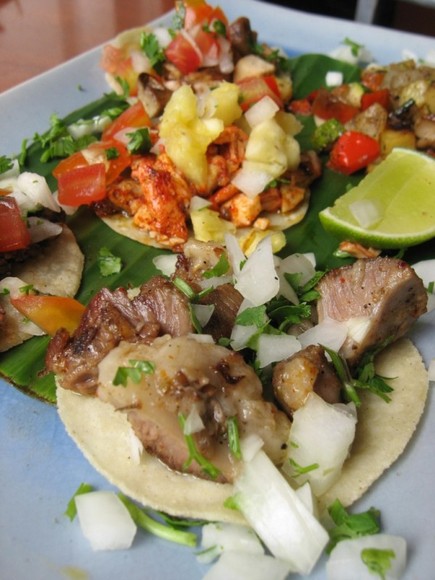 Cantina Central
51 Ton That Thiep, District 1
For the past year, Cantina Central has been satisfying HCM City residents’ cravings for Mexican street food through its selection of small plates. While burritos and tacos dominate the menu, the short and sweet anojitos/tapas section is a fun option when noshing with friends. Start with the ceviche—tender cubes of fish marinated in lime, chilli, cilantro and onions topped with jalapenos (60,000 VND). The well-presented dish is a refreshing albeit tart palate cleanser. The selection of five mini tacos (steak, chicken, pork, fish, vegetarian – 55,000 VND) is just the thing for those who can’t decide what to order. The pork and vegetarian versions shine the brightest. The grilled steak torta with avocado and tomatoes (60,000 VND) is interpreted by the kitchen as a Mexican hamburger, and although it’s not authentic, it’s executed well enough. 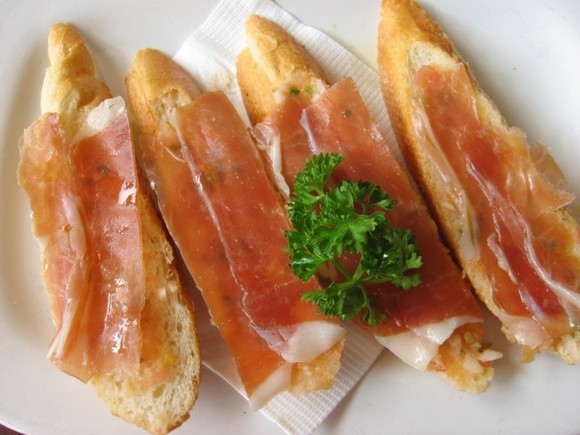 Pacharan
97 Hai Ba Trung, District 1
Opened in September 2006, Pacharan is the only restaurant in HCM City specializing in authentic Spanish tapas. Stepping into the three-story restaurant, one instantly gets the sense that Chef Fernando Olivares knows what he’s doing. Bulky legs of Serrano ham hang above the bar, while the drinks menu is heftier than the bill of fare. The menu is divided by protein and is complete with all the flavours and textures of the Mediterranean. “We intend for diners to share each portion with our tapas menu,” says Nguyen Thanh of Pacharan. “These finger foods are best paired with white and red wine or sangria.” Sangria is served by the jug (215,000 VND) or glass (45,000 VND) alongside an ample array of red, white, rose and sparkling wines. The Montaditos de Jamon Serrano (75,000 VND)—toasted rounds of bread are drizzled with olive oil and topped with minced garlic, fresh tomatoes and Serrano ham—pair well with any of the libations. The cured meat is sliced paper-thin and has just the right amount of saltiness to balance the tomato’s tartness. The Spanish omelette (65,000 VND), which is served alongside fruity purees, is also deftly prepared. The tender Pincho Moruno pork skewers (65,000 VND) are marinated in savoury Moorish spices and grilled to perfection. 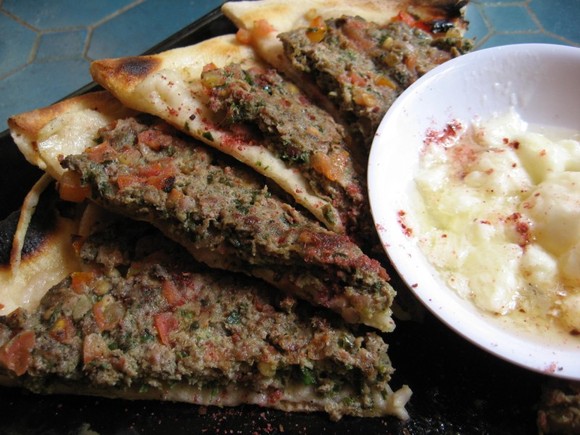 Warda
71/7 Mac Thi Buoi, District 1
The term mezze comes from the Persian maze, which means taste or snack. Warda, HCM City’s premier middle-eastern eatery, serves up hot and cold mezze for lunch, supper and late night. There is little more pleasurable than lounging with a group of friends upon plush pillows, passing around the hookah and indulging in a smattering of mezze. The Egyptian havashi (55,000 VND), grilled pita bread topped with sautéed spiced minced lamb, is a savoury dream. The lamb’s pure flavours stand out from the soft pita and fragrant spices. The sambousek (50,000 VND), oven-baked filo pastries filled with creamy goat cheese and spinach, are a lovely vegetarian option. The bite-sized turnovers are rich, crisp and airy. Another great meat-free option is the baba ghanoush (48,000 VND); roasted eggplant dip drizzled with olive oil and served with pita chips and warm flat bread. The small plates served at Warda are anything but; so do invite a big group to share in all the deliciousness.

7 thoughts on “The Tapasfication of Saigon”