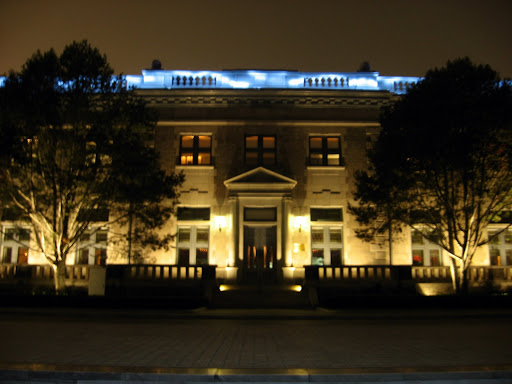 While in Kunming, I received this amazing offer from my brother via email:

Hey. If you want to have dinner here in Beijing, keep it under $250 and it will be my treat.

Talk about an irresistible offer! I booked a reservation straightaway on an evening without any Olympic sporting action scheduled. Leading up to the big day, The Astronomer and I closely monitored our meals in order to ready our palettes for an onslaught of Frenchy food.

Maison Boulud is housed in the former American embassy building in Beijing’s Legation Quarter. The exterior looks stately, while the interior feels like a library. Granted, a rather hip library, but a library nevertheless. According to the extremely detailed press release for the restaurant, “Maison Boulud’s approach can be compared to that of Chef Daniel Boulud’s highly acclaimed New York restaurants, combining the sophisticated informality of his Café Boulud with some of the grandeur and elegance of Daniel.” 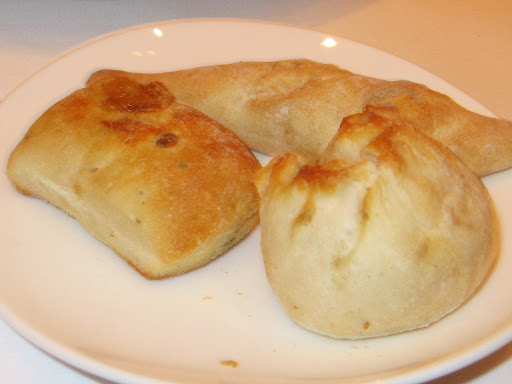 There are a number of rooms inside Maison Boulud, including a few private dining areas. The Astronomer and I were seated in the main dining room—for a layout of the entire facility, see page 16 and 17 of the press release (I told you it was detailed). Dinner started off with a selection of warm breads and slightly cool butter. Why is it that fancy restaurants forgo tongs for two spoons when delivering bread to diners? It’s the most awkward thing, especially for a waiter who’s new to the fine dining scene. After a bit of a struggle (spoon vs. bread), The Astronomer and I were delivered three breads each. My favorite was the rectangular one that had whole cloves of roasted garlic and rosemary. The long one was too crusty for me because I’m more of an innards gal, but the roundish one was solid. 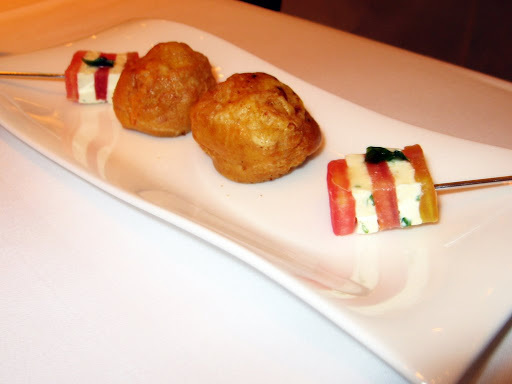 An amuse bouche of tomatoes and creamy cheese served with a cheesy puff (not to be confused with Cheesy Poofs, which were what my friends and I ate in college while inebriated). The pin-like utensil reminded me of the funky tableware Grant Achatz used at Alinea. The tomatoes were perfectly ripe and sweet—I wonder if they were grown in China. 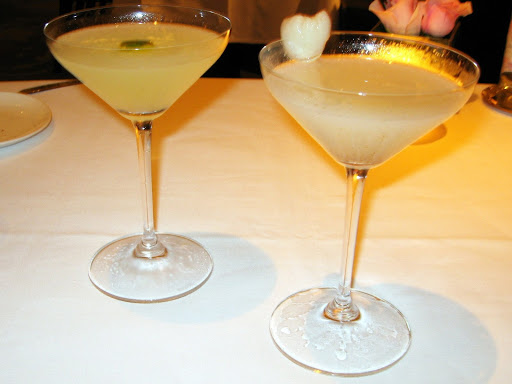 Sometime between placing our order and snacking on bread, I realized that I was being attacked by a hungry swarm of mosquitoes. With several bites on each arm and feeling extremely irritated, I asked one of the suited gentlemen if the restaurant had any sort of repellent on hand. He offered me a pashmina, which protected my guns for the rest of the evening. When these two martinis arrived without being ordered, I suspected it was because of the bug bite incident. As far as I’m concerned, strong drinks are just as good as cortisone cream to stop the itching! The lime (L) and lychee martinis were well mixed and stiffer than Martha Stewart. 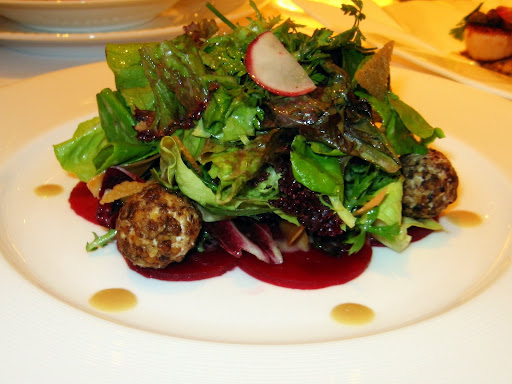 Feeling bold, The Astronomer and I ordered three appetizers. Our table was only designed for two, so things got a bit tight with all three appetizers arriving at once, especially with two bread plates and one butter dish already taking up space. I should have requested that the appetizers arrive in courses since we were sharing, but in restaurants this nice, waiters are usually familiar with the protocol. To be fair, the restaurant has only been open for a couple of months, so the waitstaff isn’t as polished as those at Boulud’s other outlets.

I chose the roasted beet salad with Chinese black walnut goat cheese and summer greens (90 RMB) to start, because its been way too long since I’ve enjoyed roasted beets. The dressing was a straightforward vinaigrette, and the greens were a basic mesclun mix. The highlight of the salad were the balls of goat cheese crusted in walnuts that were creamy, rich and nutty. 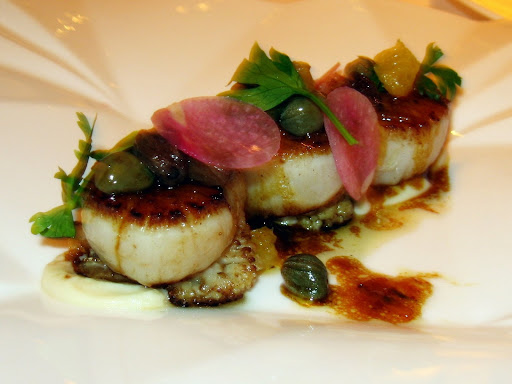 Our second appetizer were caramelized sea scallops with cauliflower, orange glaze, capers and croutons (195 RMB). This dish was comprised of a number of layers—a florette of cauliflower formed the base, then came the succulent scallops, capers and bits of tart mandarin oranges. The capers stood out among the toppings because of its sour tinge. 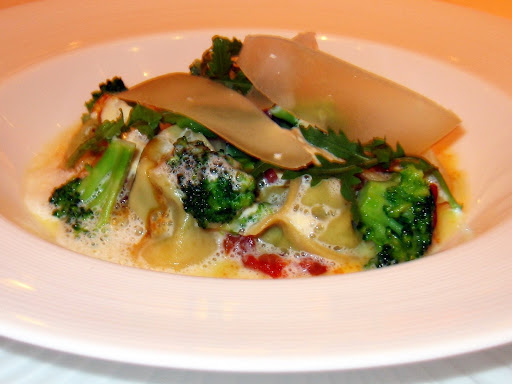 The broccoli tortellini, fried artichokes, crispy pancetta and Parmesan emulsion (130 RMB) was our favorite appetizer. With all this street food we’ve been eating, it’s been ages since we’ve dug into some proper foam! The pancetta and chunky tomato sauce coupled with the Parmesan emulsion flavored the delicate pasta wonderfully. 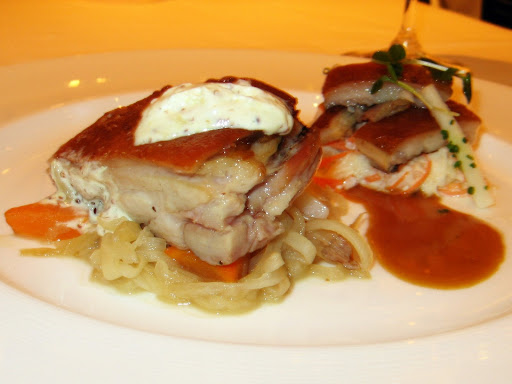 While the appetizers didn’t knock our socks off, the entrees rocked like old school Weezer. Knowing that the pig is my favorite animal to eat, my brother heavily hinted that he wanted me to order the crispy suckling pig with daikon sauerkraut, apple coleslaw and Dijon mustard jus (230 RMB). And boy am I glad I did. Seriously, this dish ruled. The skin was taut and crispy, while the meat was SO tender that I’ve vowed to only eat baby animals for the rest of my life. Is that wrong? The sides were a fine accompaniment, but there was no competing with the star of the show. 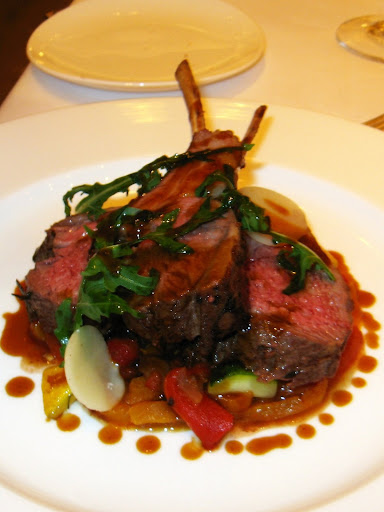 The Astronomer went for the cumin roasted loin of lamb with sweet pepper stew, Persian dried figs and summer squash (260 RMB). Although it wasn’t specified on the menu, we suspect that the meat came from a baby lamb because there wasn’t a trace (or taste) of hard living. I find that lamb, even the tenderest of cuts, is usually slightly chewy. However, the texture of Boulud’s lamb was anything but—a cross between foie gras and butter. No joke. 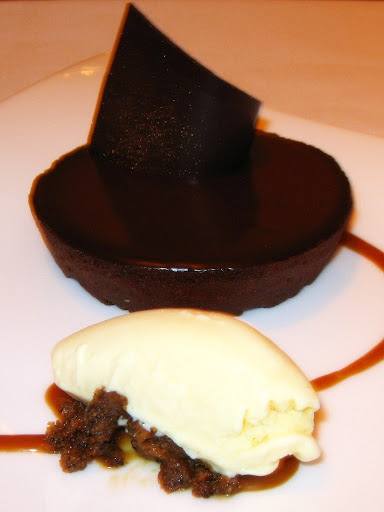 For dessert, I chose the mocha tart with coffee-chocolate ganache, caramel sauce and whiskey ice cream (95 RMB). Everything about the tart was perfect—the crust was buttery and a little crumbly, while the chocolate ganache was intensely rich, silky smooth and not overly sweet. Words can’t do the ganache’s texture justice, it was simply incredible. I haven’t had enough shots of whiskey in my day to tell you if the ice cream was accurate, but I can tell you that it tasted fabulous and provided a cool contrast to the bombardment of chocolaty goodness. 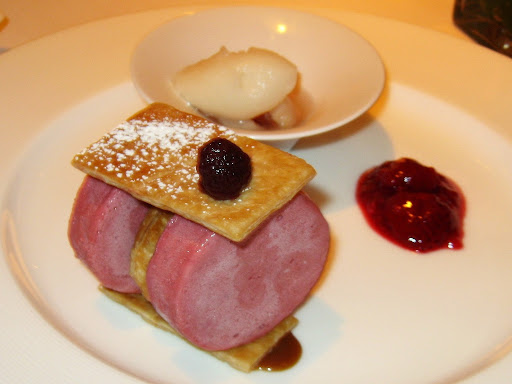 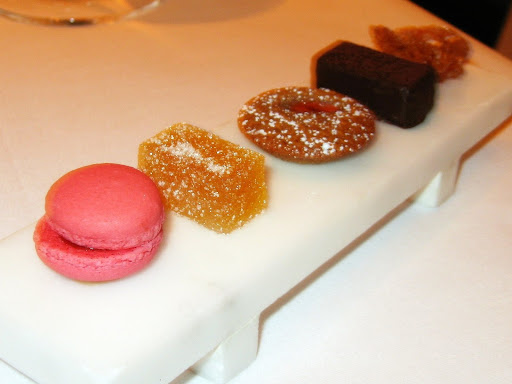 The petit fours arrived next. We were stuffed of course, but that didn’t stop us from eating each and every one. The sugar-coated passion fruit jelly was my favorite. I think petit fours are the best part of fine dining—they’re just so impossibly cute! 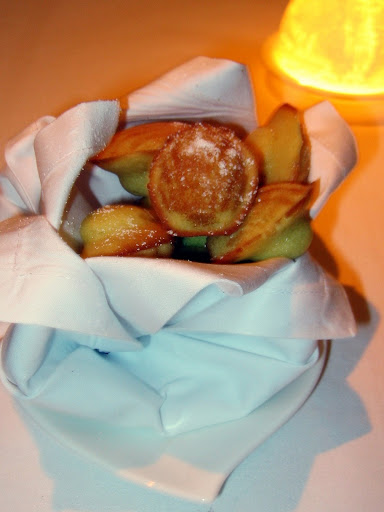 After we paid our bill, the waiter brought us additional petit fours and madelines. We tried to explain to him that we had already received both, but the language barrier was too much and he just kept saying, “No, they are complimentary.” The Astronomer squeezed in one more madeline, but the petit fours remained on the table untouched. I hope this newby glitch never gets worked out. 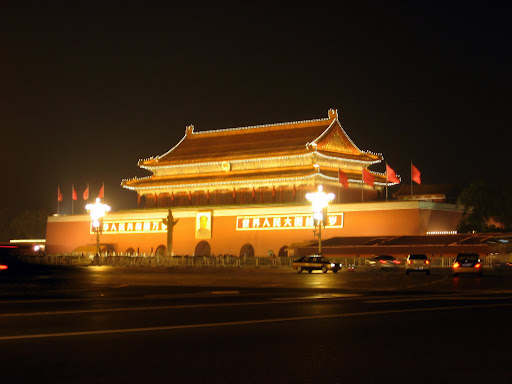 On our walk back from dinner across Tienanmen Square, we waved hello to Chairman Mao.