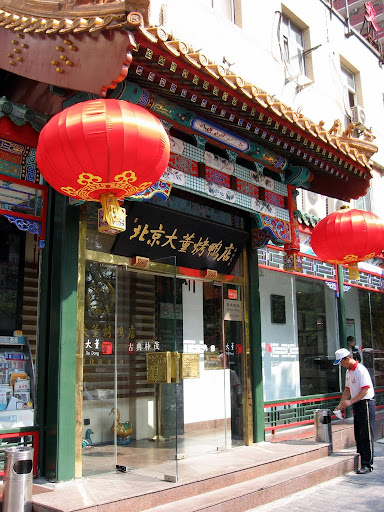 A trip to Beijing wouldn’t be complete without a meal of Peking duck. After consulting a number of food blogs and online publications, I decided to take Diana of Appetite for China’s advice and try Da Dong Roast Duck Restaurant even though Quanjude and Bianyifang are the city’s most popular establishments.

Peking Duck originated in Beijing and has been prepared since the Yuan Dynasty. According to Wikipedia, ducks are bred specially for the dish and are slaughtered after 65 days. The ducks are then seasoned and roasted in a closed oven or a hung oven.

We arrived at Da Dong at lunchtime and were stunned by the number of Olympic-goers who also felt the need to cross “eat Peking duck” off of their to-do lists. The wait time was quoted at 40 minutes, but ended up being more like a full hour. 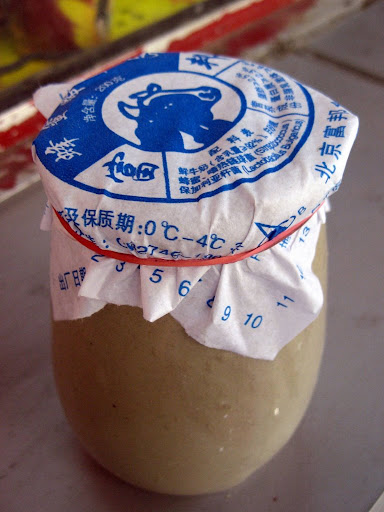 To pass the time away and to quell our hunger pangs, The Astronomer and I strolled around the neighborhood in search of light snacks. We stumbled upon a convenience store nearby where The Astronomer picked up some cookies, while I went for a mysterious beverage sold in a little clay jar (3 RMB). I’ve noticed Beijingers consuming some sort of liquid from similar clay jars and was curious to try it myself. The consistency was a bit too thick to suck through a straw, so I removed the rubberband and tissue paper and gulped it down. It turned out to be yogurt—thick, sweet, a smidge sour and all around good. 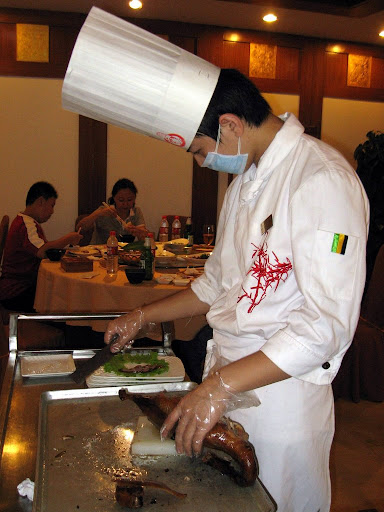 After our excursion, our table was finally ready. Even though there was only two of us, we were seated at a table for 10. The duck usually takes 70 minutes to prepare because it is made to order, but The Astronomer had a stroke of genius and pre-ordered ours so that it was ready upon arrival! Woot for instant gratification!

We ordered a half portion, which set us back 98 RMB. This was double the normal price—hotels weren’t the only ones looking to cash in on Olympic fever. Each duck is carved tableside by a fowl artist wearing a surgeon’s mask. 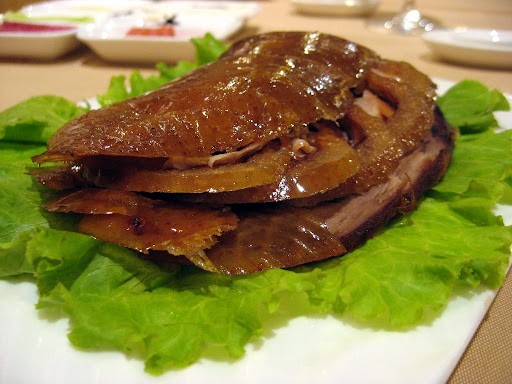 The duck was presented to us in neat slices upon leaves of Romaine. The skin was glossy, thin and crispy—definitely the highlight of the entire dish, while the meat was moist but unspectacular. By the way, Da Dong’s specialty is a leaner duck; apparently it only has 17%  fat compared to up to 47% for other Peking ducks. 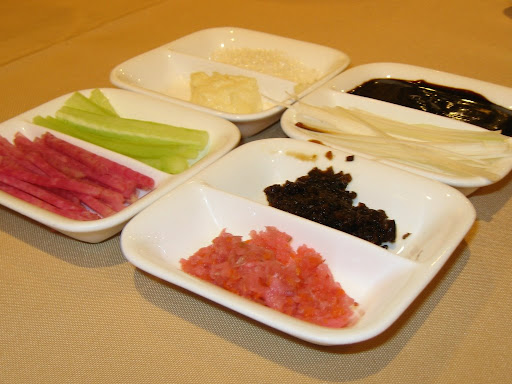 The duck is served with an array of condiments. The classic accompainments are scallions, cucumbers and hoisin sauce. The extras included crushed garlic sauce, granulated sugar, julienned turnips (I think) and two mysterious chunky pastes (pink and brown—front and center) that The Astronomer and I could not decipher. 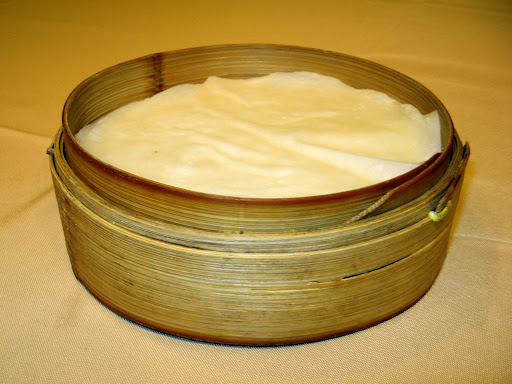 A portion of steamed pancakes to wrap up the duck and condiments in. To assemble, we put a little bit of this and a little bit of that onto the pancake along with a few slices of duck. We wrapped it up neatly, ate and repeated until the duck was gone. The cool cucumber was my favorite condiment; the combination of granulated sugar and garlic came in a close second.

After a year of living and eating in Vietnam, The Astronomer found it VERY peculiar that the proper protocol for eating Peking duck was to spread the hoisin sauce onto the pancake rather than dip the roll into the sauce, a la goi cuon. That’s my boy! 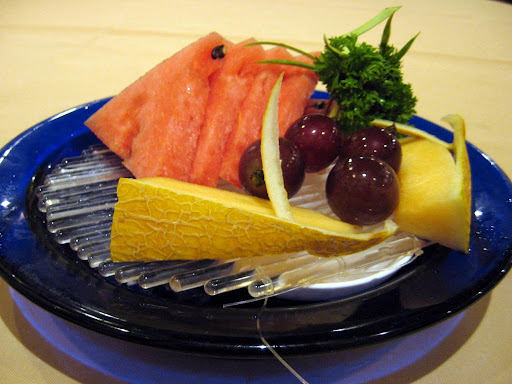 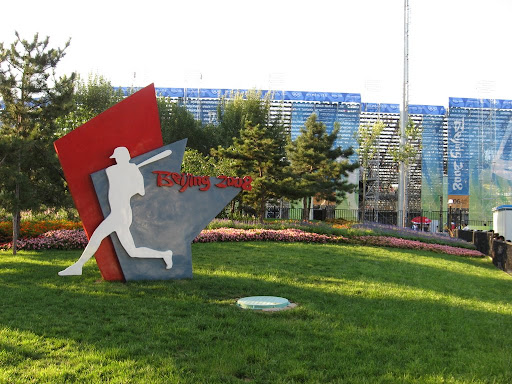 With our tummies full of ducky goodness, we headed to the baseball diamond. 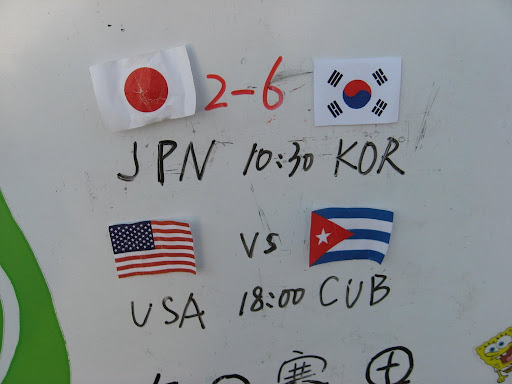 We caught the semi-final match-up between the USA and Cuba. 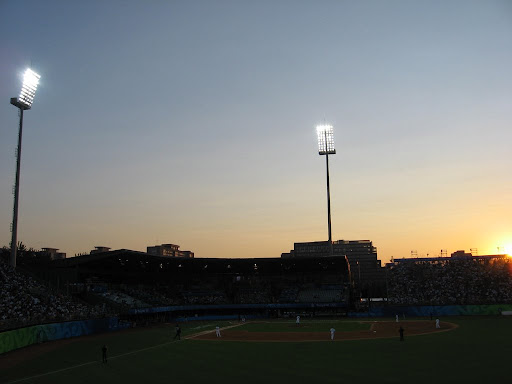 The sun setting over the field. There’s nothing like catching an evening baseball game during a warm summer night. 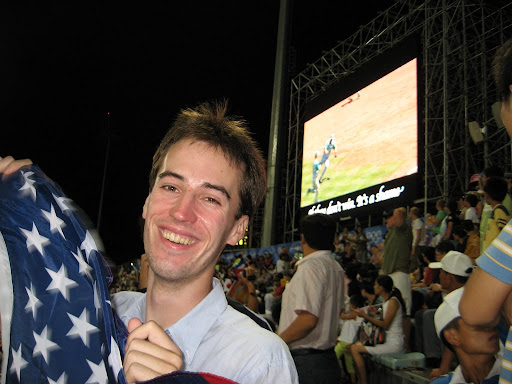 The Astronomer waving his newly purchased America flag during the seventh inning stretch. The lyrics to “Take Me Out to the Ball Game” appeared on the big screen for everyone to sing along. We felt like we were back in America. Too bad the minor leaguers couldn’t hack it against the Cubans. It could have been a perfect day.