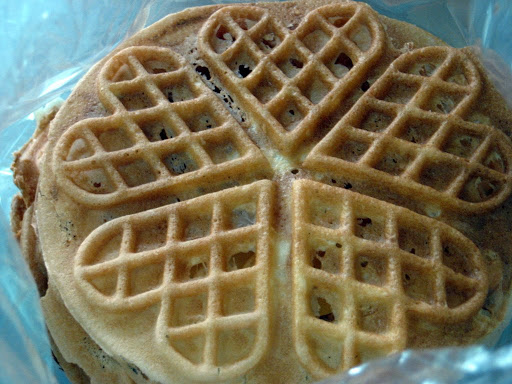 While banh mi vendors dominate the street food scene outside the central part of town, ladies making coconut waffles are all the rage along the city’s touristy thoroughfares of Le Loi, Dong Khoi and Nguyen Thi Minh Khai. I’m not sure how this trend came about, but I’d venture to guess that coconut waffles are highly profitable foodstuffs because they’re so tourist-friendly. I mean, they look just like Western waffles and have an easy-going sweetness that appeals to everyone. 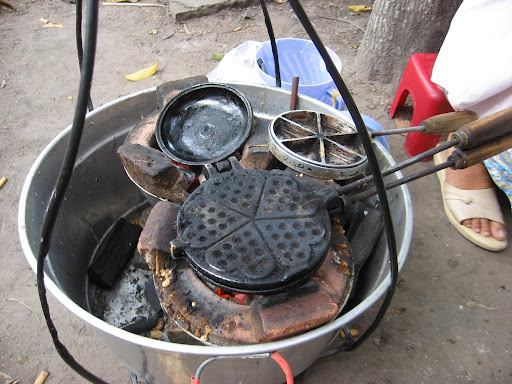 The waffle batter, which is comprised of rice flour, water, coconut milk, sugar, oil and eggs, is usually made by the vendor prior to setting up shop. Vendors use cast iron molds that cook over a charcoal brazier to make each and every waffle. Can you hear the sizzle of the batter hitting the hot iron? Waffles are sold hot-off-the-mold or in pre-assembled packages of ten. Since waffles are most readily available in the touristy part of town, make sure to bargain! 6,000 VND for a bag of ten is a good deal. 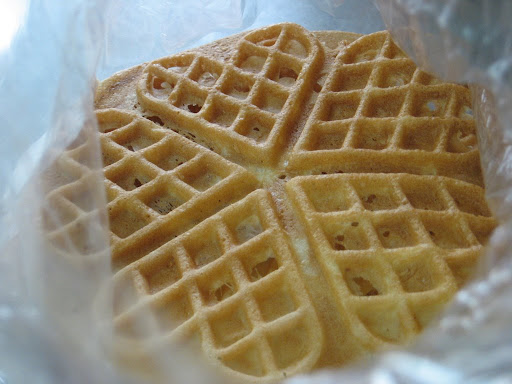 Unlike the slightly cakey waffles we’re used to in the West, these Vietnamese waffles are paper-thin and wafer-like. There’s no maple syrup or pat of butter required because the batter already contains a good amount of sugar. It’s best to eat them with your bare hands because the texture is very delicate. In fact, they easily dissolve on one’s tongue. Andrea Nguyen of Viet World Kitchen has a recipe for coconut waffles if you’re interested in recreating the magic of Saigon street food in your very own home.