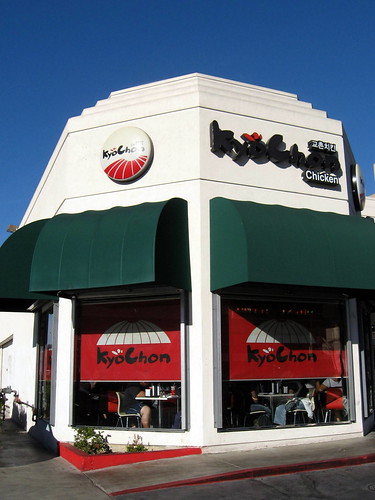 KyoChon has been on my ‘To Eat’ list ever since our fair city’s restaurant guru Jonathan Gold named it the Best Fried Chicken in the L.A. Weekly‘s Best of L.A. issue. Mr. Gold writes:

Korean fried chicken really is an evolutionary leap forward — marinated in a cabinet full of spices, saturated with garlic, double-fried to a shattering, thin-skinned snap dramatic enough to wake a sleeping baby in an adjoining room.

Quite a sell, right? After our Tar Pits outing, The Astronomer, my mom and I swung by KyoChon in Koreatown to sample their highly-praised offerings. 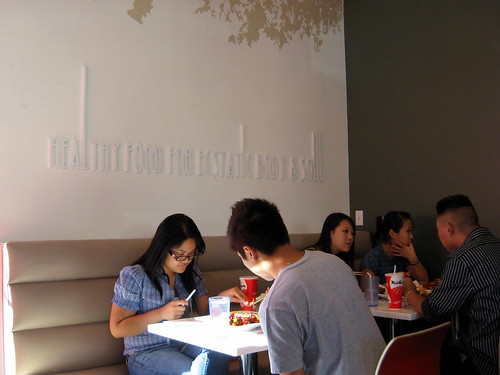 The brightly lit restaurant was packed (and slightly understaffed) on the Saturday afternoon we visited. Even though KyoChon looks like a typical American fast food joint, ordering takes place table side and the bill is presented at the end of the meal. On the restaurant’s wall is a cryptic slogan that reads: “Healthy Food For Ecstatic Body & Soul.” Firstly, what does that mean? And secondly, let’s not kid ourselves—this place serves up fried chicken! 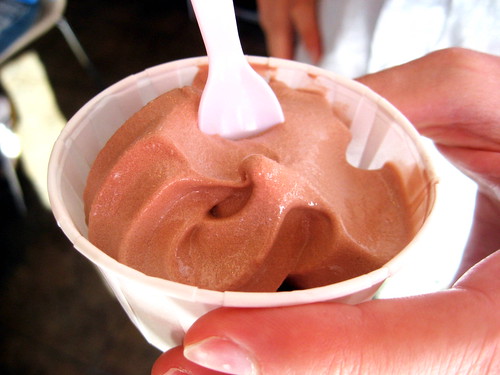 At KyoChon, the chicken is prepared to order, which means a thirty minute wait is fair game. To keep patrons from bitching and moaning about the substantial lull, KyoChon offers free soft serve. The Astronomer nibbled on a little cup of chocolate fro-yo to keep his blood sugar level steady. 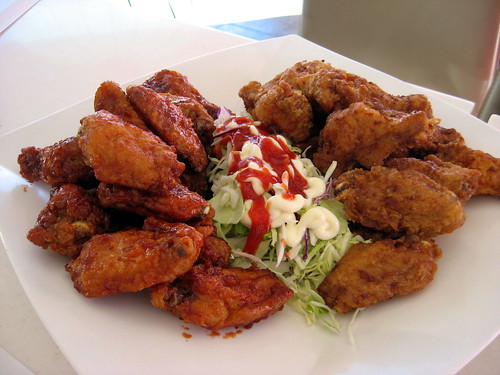 The three of us shared a twenty piece wing platter ($16.99)—ten pieces with garlic soy sauce and ten with hot sweet sauce. What makes Korean-style fried chicken radically different from Southern fried chicken is an “Asian frying technique that renders out the fat in the skin, transforming it into a thin, crackly and almost transparent crust,” according to Julia Moskin of the New York Times. In her article Koreans Share Their Secret for Chicken With a Crunch she explores the process in depth.

The chicken is unseasoned, barely dredged in very fine flour and then dipped into a thin batter before going into the fryer. The oil temperature is a relatively low 350 degrees, and the chicken is cooked in two separate stages.

After 10 minutes, the chicken is removed from the oil, shaken vigorously in a wire strainer and allowed to cool for two minutes. This slows the cooking process, preventing the crust from getting too brown before the meat cooks through. It also shaves off all those crusty nubs and crags that American cooks strive for. After 10 more minutes in the fryer, the chicken is smooth, compact, golden-brown, and done. 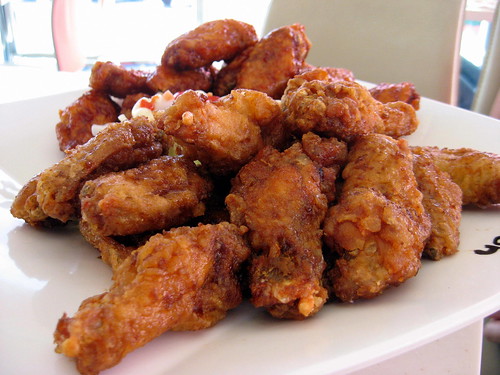 The garlic soy sauce wings were easy to love. The snappy texture was appealing and the garlicky flavors were fantastic. A definite crowd pleaser. 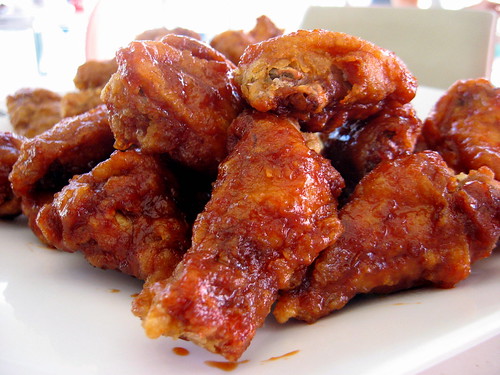 The hot sweet sauce wings were addictive even though they caused an intense burning sensation in my mouth. At first bite, the wing’s sweet sauce pervaded my senses. A few chews later, my tongue was on fire due to the Korean red peppers. Yow! Even though my nose was running and I was beginning to sweat, I went in for another. And then another because they’re so good! 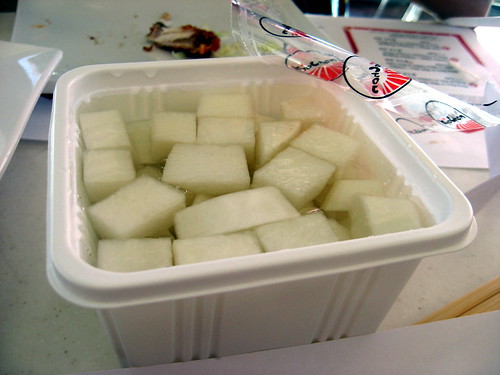 To curb the wicked spiciness, I melted ice cubes on my tongue and popped a couple cubes of pickled radish ($1) in my mouth. Pickled radishes, which taste briny, sweet and crunchy, are a typical accompaniment to Korean fried chicken and serve as a much-needed foil to the fiery wings. 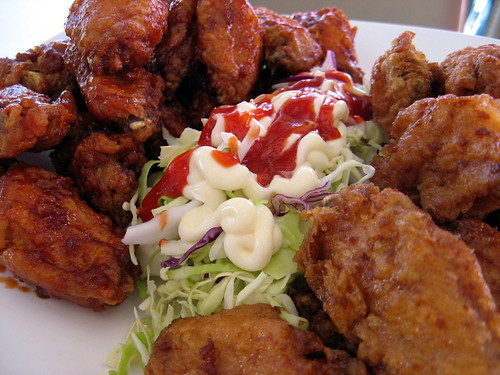 The wings platter came with a coleslaw of shredded cabbage topped with mayonnaise and ketchup. Pass.