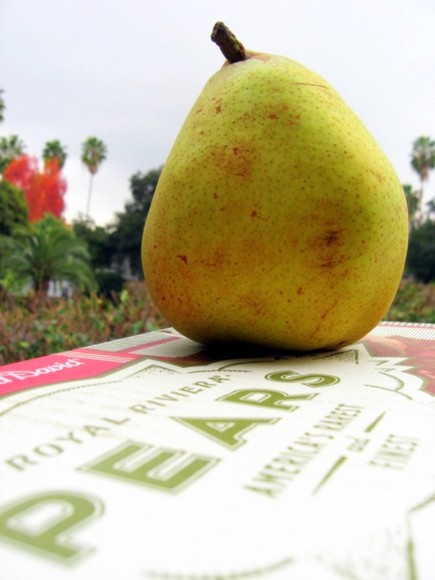 The Comice pear has long been enjoyed by European nobility for its smooth, creamy texture and exquisite flavor. Grown in only a few places in the world, the pear has found the perfect home in Southern Oregon’s Rogue Valley, where in 1934 brothers Harry and David Holmes launched their famous gourmet gift business with the premium fruit.

Since the start of Harry and David nearly 70 years ago, millions of Americans have continued to send and receive Harry and David’s pears, called Royal Riviera Pears by the brothers, as holiday gifts. Their rich, creamy texture, succulent juiciness (so juicy you can eat them with a spoon) and large, pound-apiece size make Royal Riviera Pears the ultimate holiday gift.

The Astronomer’s family has been eating Royal Riviera Pears from Harry and David ever since he can remember. Back when we first started dating, he mailed me a box of pears as a gift. I was initially appalled that he shelled out thirty bucks for eight measly pears, but after one bite, it was clear that these pears were really something special. Pears at the grocery store never dribble sweet juices down one’s chin.

The Astronomer’s parents recently mailed us a box of Royal Rivera pears for the holidays, and boy am I glad they did. Consuming five-a-day has been so difficult after the bounty of Vietnam, but these pears make it a little bit easier. And stickier.