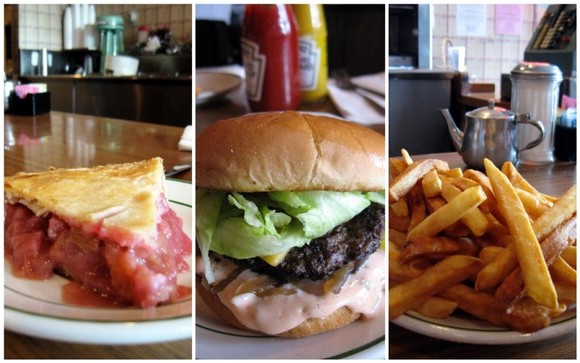 In the early days of gas•tron•o•my, a common feature on the site was he said / she said joint reviews where I’d write a few words and The Astronomer would chime in with his two cents. I decided to bring back this tradition with my friend Laurie. She’s a fellow Pasadena resident and Caltech physics graduate student canoodler. We have lots in common.

Laurie: Ever since I moved to Pasadena with my own Astronomer, I’ve been hearing foodies and physicists alike raving about the two namesake items at Pie ‘n Burger. I walked past the place often enough, but the air wafting out of the kitchen always smelled like grease, so I avoided it. Fool! I should have known better.

Gastronomer: We came for lunch on a sunny Friday afternoon. Pie ‘n Burger’s been around since 1963 and not much has changed since then. According to the restaurant’s website, one of the waitresses has been there from the start, and the current baker has manned the ovens since 1971—a very impressive retention rate, if I do say so myself! 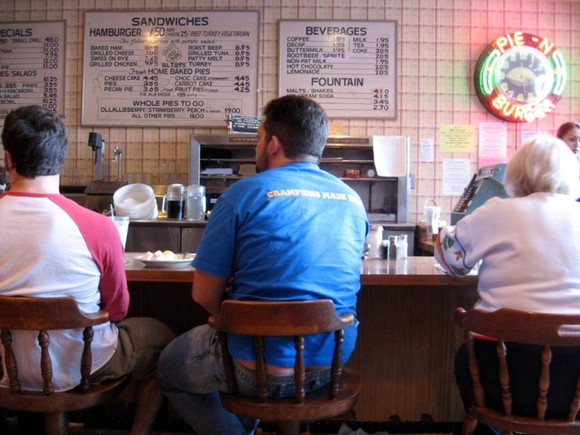 Laurie: After signing our names on the seating list and waiting half an hour, The Gastronomer and I were finally seated at the bar.

Gastronomer: The Formica counter and wooden swivel chairs upon which Laurie and I dined are the same ones from nearly fifty years back. 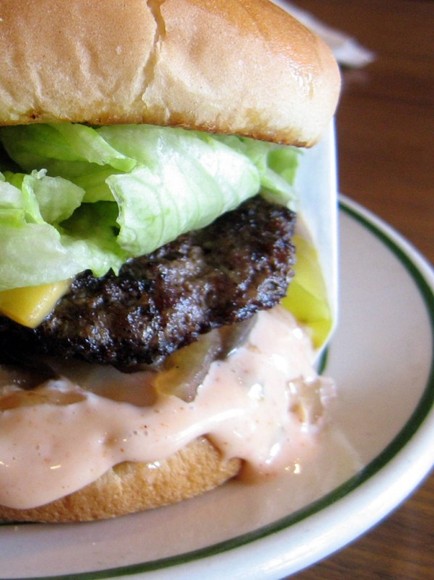 Laruie: We ordered two of the famous burgers with cheese ($6.75) and split an order of fries ($3.55). When our lunch arrived, we dove into the greasy goodness. The burgers were topped with grilled onions (at The Gastronomer’s request), cheese, tomato, lettuce, and the eatery’s homemade version of Thousand Island dressing. Glorious. The burger was a bit heavy on the lettuce, but otherwise, it was bitchin’.

Gastronomer: As cliche as this may sound, it was, in fact, love at first bite. Pie ‘n Burger’s signature dish tasted absolutely fresh and didn’t sink to the pit of my stomach the way lesser burgers do. Laurie and I had some big-ass smiles on our face as we chomped, chomped and chomped some more. I couldn’t shut up about how delicious the burger was for the rest of the day. 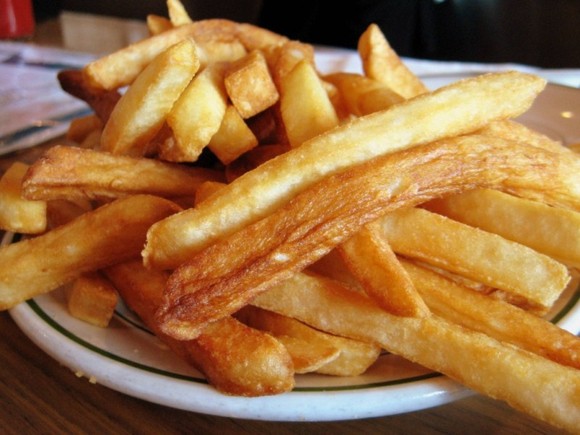 Laurie: We could have done without the massive plate of chain-restaurant-style steak fries that tasted like they’d been frozen at one point in their lives. Not bad, but I wish I had saved the room for more pie.

Gastronomer: The limp and lame fries tasted more palatable with copious amounts of ketchup, but next time around, we’ll pass. 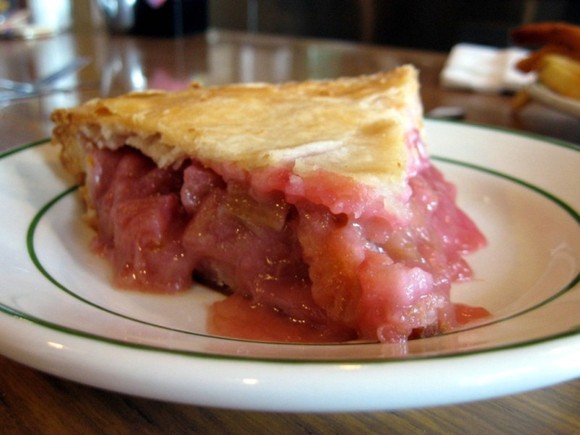 Laurie: And oh, the pie. After our huge meal, The Gastronomer insisted that we sample both of the restaurant’s specialties, and she ordered a slice of rhubarb pie. All I had room for was one bite, so I made sure to savor it. The rhubarb was sweet but still tangy enough to balance out the rich, buttery crust. I’m not a crust person. If someone is nice enough to eat the leftover crust of a piece of pie for me, we’ll be friends forever. But this crust was out of this world. It was flaky, but held together well; buttery, buttery; sweet but not overwhelmingly so; and contained a touch of salt to bring it together. Perfection. Although I loved the burger, next time, I’m skipping the entrée and going right for the dessert.

Gastronomer: That’s what she said!