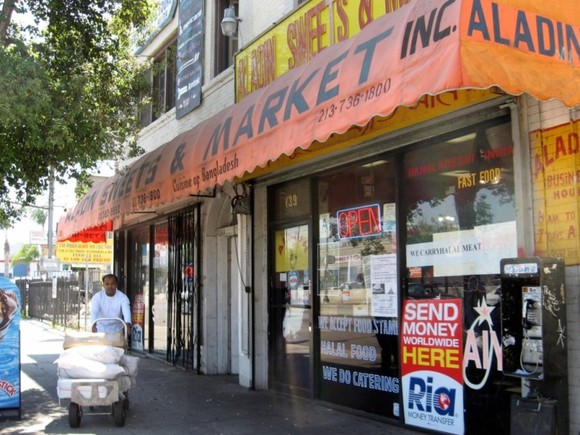 There are only four words in the English dictionary that are short, sweet, and crass enough to aptly describe dining out with Tony C:

Inspired in part by a piece in the New York Times titled, Koreans and Bangladeshis Vie in Los Angeles District, Tony C. spearheaded a Bangladeshi feast at Aladin Sweets & Market. Attendees included me, The Astronomer, Laurie, and Ani P., a Yelper and Bangladeshi food expert whom Tony C. coerced into showing us the ropes. Thanks again, Ani! 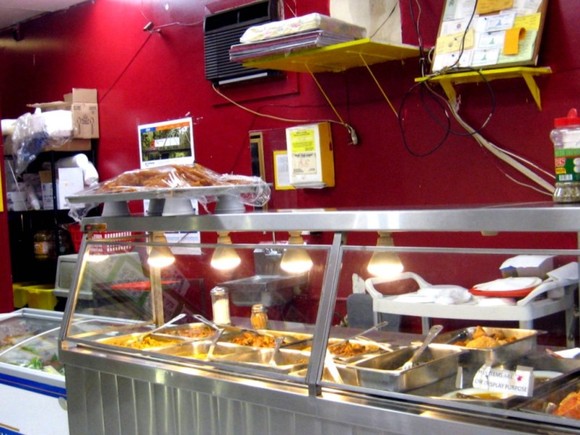 Aladin Sweets & Market, which is one of Ani P.’s favorite Bangladeshi eateries, is divided into three distinct sections. A canteen-style lunch counter brimming with goodness greets patrons as they walk through the front door. The prepared foodstuffs here can be eaten in house or packed to-go. To the left of the main entrance is a small dining room and an even smaller market. The market carries a selection of Bangladeshi, Burmese, Indian, and Pakistani spices, groceries, frozen fish, and fresh produce.

As we waited for Ani P. to arrive, Tony C. perused the enticing offerings before us and boldly declared to the man behind the counter, “We’ll take one of everything.” 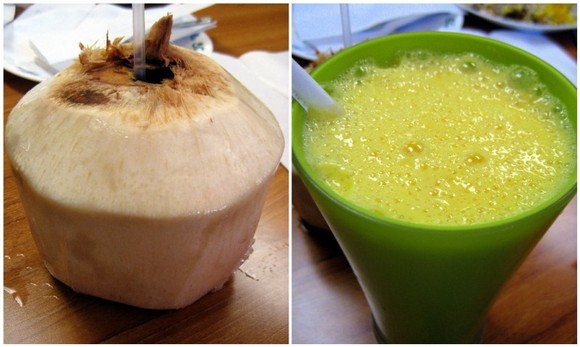 As we settled into our spacious corner booth and waited for the circus of food to arrive, we sipped fresh coconut juice ($1.49) and mango lassi ($2.99). 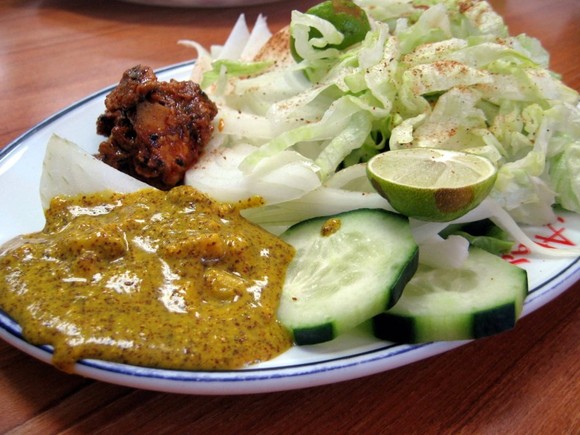 Condiments—pickled mangoes, shredded iceberg, lemons, onions, and green chilies. The pickled mangoes tasted too astringent to some, but I dug their harsh sourness. 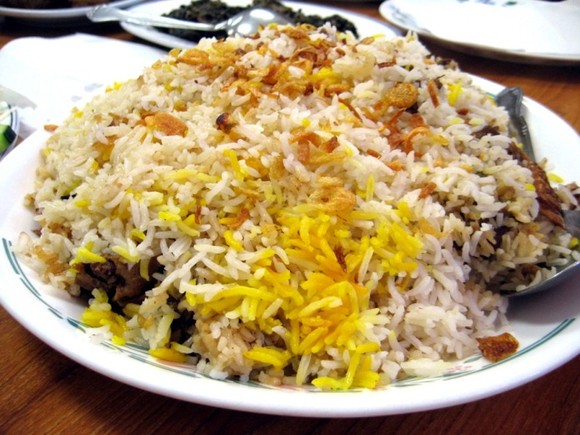 The biryani ($5.99), which is one of the chef’s specials, was comprised of lightly spiced basmati rice fried with tender mutton and sprinkled with crispy shallots to finish. 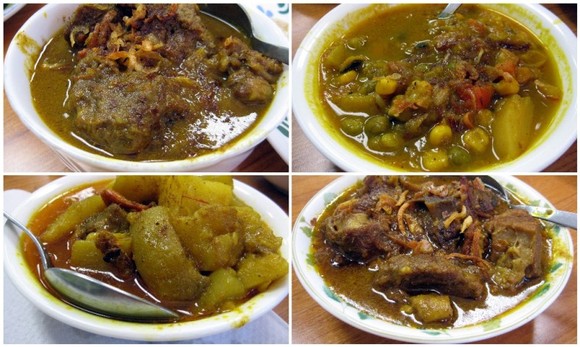 Curry four ways (clockwise from top left)—mutton ($2.99), daal ($1.99), beef ($2.99), and vegetable ($2.99). Between the meaty duo, our table favored the musky mutton over the succulent, but standard beef. The big hunks of winter melon in the vegetable curry were most excellent.

To the untrained palate, the selection of curries more or less tasted like typical Indian ones. For someone who grew up eating Bangladeshi cuisine like Ani P., the subtle differences in spicing and preparation were far more pronounced and distinct. 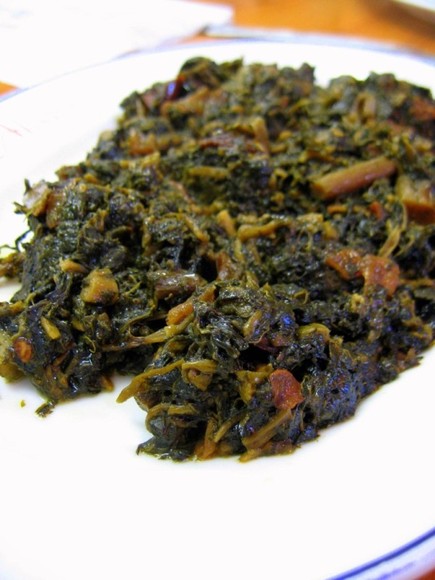 Ani P. was concerned that the sag bhajee ($2.99) was too bizarre for our group, but we assured her that our tastes were very adventurous. Comprised of spinach, onions, and tomatoes simmered in a fragrant bath of garam marsala, chili powder, turmeric, and garlic, the stringy sag bhajee registered a zero on the Strange-o-Meter scale and a solid 7.5 on the Yum-o-Meter. Best of all, the sag bhajee made us feel virtuous for downing spinach in huge heaps. 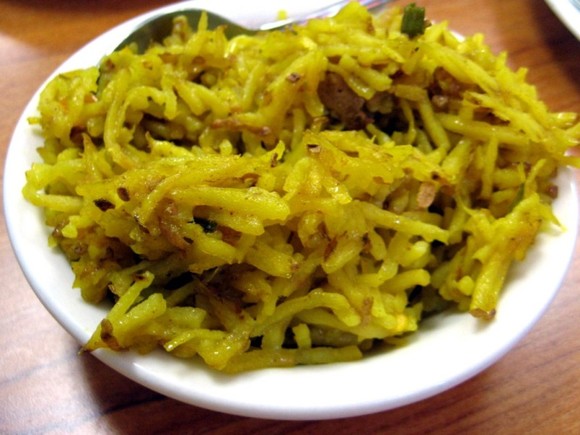 The saffron-hued hash brown dish was as forgettable as its proper Bangladeshi name. 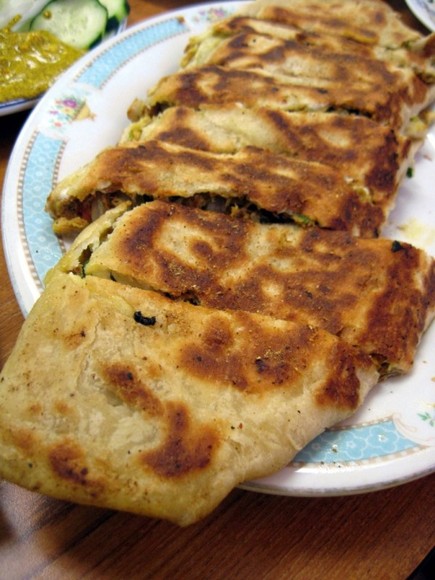 The most noteworthy, delicious, and distinctly Bangladeshi treat we sampled was the mooli paratha ($3.99)—flat bread (paratha) stuffed with scrambled eggs, onion, green chilies, tomato, cilantro, and shredded chicken. Made to order, the mooli paratha arrived beautifully toasted and generously stuffed. This gem is worth braving L.A. traffic for. 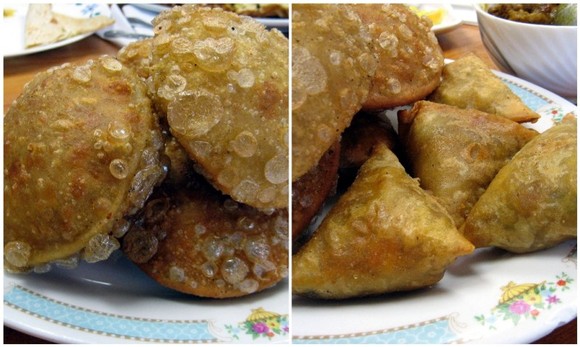 In the deep-fried carbohydrates department, we ordered a few luchis (left – $1 each) and a couple of vegetable samosas (right – 75¢ each). The puffed-up luchi pouches were hollow inside and pleasantly spiced with the usual savory suspects. Laurie was especially fond of these.

The samosas were great as well, but like the curries, the untrained palate could not differentiate any differences between these and their Indian counterparts. 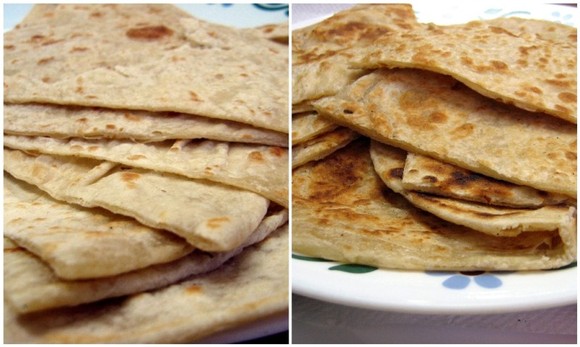 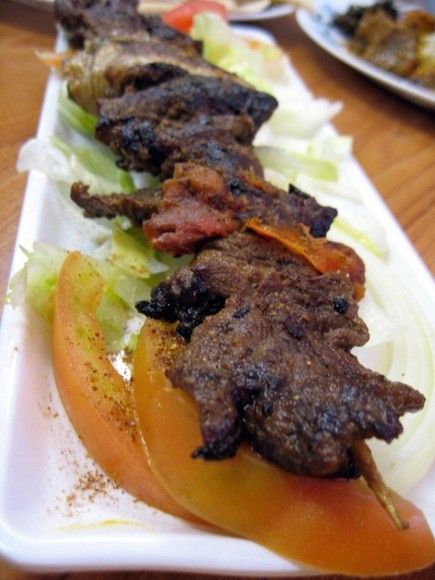 Although the beef shish kabab ($3.99) appeared dry, it was surprisingly tender and very well-seasoned. Who knew shish kabab was a Bangladeshi staple? 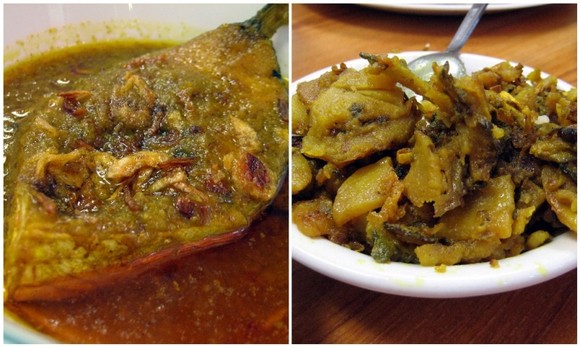 Seasoned and stewed in mustard seeds, tumeric and green chilies, the rui macher fish curry was deeply flavorful but frustrating to eat due to its tiny and plentiful bones. The korola bhaji, a light stew dominated by bitter melon, was an acquired taste. 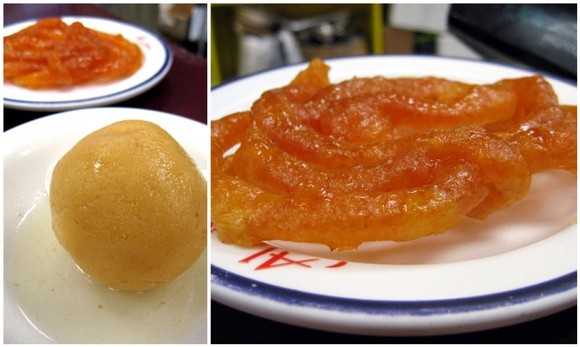 Even though we were uncomfortably stuffed at the end of our feast, we managed to share two small sweets. The supple rasgulla (left – $1.50)—prepared by kneading chhena (fresh curd cheese), rolling it into small balls, and boiling it in a light sugar syrup—tasted like concentrated milk in solid form. The pool of syrup wasn’t sweet enough to balance the overwhelming taste of dairy.

The orange-tinged jilapi coil ($1 per serving) tasted mostly oily and sweet. There’s a fine time for oily and sweet treats, just not at the end of a gut busting lunch. 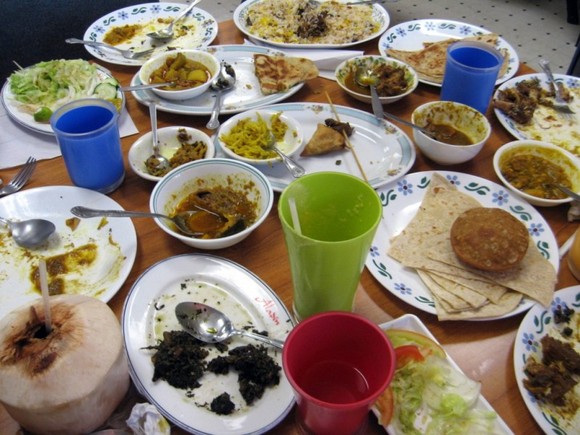 The damage. The Astronomer and I took home three boxes of leftovers. We were amply fed for the next three days.

Dining with Tony C. is madness.