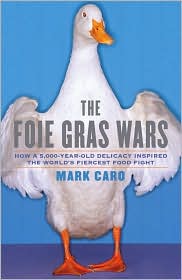 About: Veteran Chicago Tribune entertainment reporter Caro expands on his front-page story about a 2005 flap over foie gras with a wide-ranging investigation into the ethical debate surrounding the human consumption of fattened duck liver. Drawing on conflicts in Chicago, Philadelphia and California over whether force-feeding birds should be legislated as torture or standard agricultural practice, Caro presents various positions from duck farmers, chefs and animal rights activists. His chatty arguments between industry players deliver without becoming unnecessarily complicated or resorting to the oversimplification of surveys and superficial media reports. Caro offers descriptions of a vegan activist headquarters, a video depicting a rat burrowing into an injured duck, and traditional farm operations in France. While he pursues his source’s agendas with due diligence, he appears reluctant to side completely with gourmands despite describing presumably happy ducks, mouthwatering foie gras meals and even eating a raw duck liver. While he tends to focus on the colorful, entertaining aspects of the food’s history and science, Caro’s selection of pointed quotes from duck liver lovers and foie gras foes presents an in-depth take on this ongoing food fight. From Publishers Weekly.

My Thoughts: I snatched up The Foie Gras Wars on the New Non-Fiction bookshelf at my local library. While it was the sensationalist title that initially caught my eye, Caro’s personable style of writing drew me in and kept me interested from start to finish. I appreciated how Caro’s background as an entertainment reporter distinguished his voice and style from the Michael Pollans and Marion Nestles of the food politics writing world.

As a semi-frequent fine diner and full-time news media hound, I’ve read bits and pieces here and there about the controversy over foie gras. I was well aware that the substance was banned for a period of time in Chicago and that Philadelphians were considering similar legislation, but I never understood the full picture until reading this book. I was really surprised to discover that it was Charlie Trotter who started this whole messy foie gras war. Not cool Chaz, not cool at all.

Some of the funniest parts of The Foie Gras Wars looked at the lengths Chicago chefs went to in order to serve the illegal substance. From giving it away gratis to establishing membership-only secret clubs, foie gras never really disapeared from the city’s fine dining scene. On the Philly front, cranky old Georges Perrier‘s (of Le Bec-Fin fame) tit for tat with the animal rights group Hugs for Puppies was a riot as well.

Aside from examining the politics and personalities behind the battle lines, Caro also paid a visit to a few of the U.S.’s major foie gras farms, including Hudson Valley Foie Gras and Sonoma Foie Gras, to witness gavage (force-feeding) firsthand. Although Caro doesn’t outwardly state whether or not he feels that foie gras production is cruel, from his tone and words, I gathered that he’s more for than against.

After reading Caro’s detailed accounts of gavage in both North America and in France, I remain comfortable consuming foie gras. However, I must admit that the images that surface from Googling ‘gavage, foie gras’ makes my stomach turn slightly.

One thought on “The Foie Gras Wars – Mark Caro”